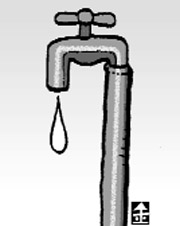 A 154-pound, 5’ 7” person is almost half water. If our body’s water drops by 1 percent, we get thirsty; if we lack 5 percent, we get dizzy. If 10 percent goes, walking becomes difficult. A 12 percent decrease in body water puts our very lives in danger. It’s impossible to last more than a few days without water.
Each person in a Korean family uses an average of 47 gallons of water every day. On the other hand, in sub-Saharan Africa and parts of Mongolia, one must take care of all one’s needs with 1.3 gallons a day.
Although the United Nations proclaimed in 1992 that every person should have access to 11 gallons of water a day, about 1.1 billion people still suffer due to lack of water.
Many must walk more than half a mile to obtain clean water or end up drinking heavily contaminated water from close by. In Somalia, where people suffer from droughts, there are sometimes killings between tribes for access to wells.
March 22 is United Nations World Water Day. Every year at around this time, there are debates as to whether Korea is a water-scarce country or not. According to Swedish scholar Malin Falkenmark, a nation with less than 449,000 gallons of water per person annually is water-scarce. This definition is widely used internationally.
Water annually available to Koreans amounts to 393,000 gallons, making Korea a water-scarce country by this measure. However, it is true that other than water shortages in certain regions in the spring, we don’t feel the shortage.
This is because South Korea imports the water it lacks. Of course, it is not real water, but “virtual water” in the form of food.
To produce one ton of wheat, 343,000 gallons of water are needed; one ton of beef takes 4 million gallons. If we import food, we are saving that much water used in agriculture.
According to Unesco, Korea imported 10.3 trillion gallons of virtual water and exported 1.8 trillion gallons between 1997 and 2001. That meant a net import of 8.5 trillion gallons of virtual water.
Korea is the fifth-largest importer of water after Japan, Italy, the United Kingdom and Germany.
Each year, we import 11 times the water storage capacity of Soyang Lake, or the same amount of virtual water as real water that we use from rivers, dams and underground sources.
Recently, energy and food prices have skyrocketed.
Further, natural resource diplomacy and food security are being emphasized.
On this year’s World Water Day, we should also think about the virtual water we lack.