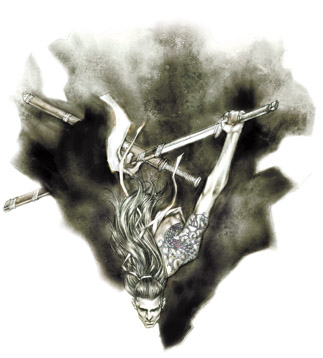 Readers in South Korea have the same reading choices as others around the world, but there is one segment of books that is perhaps unique to the country ― the loyal following to books collectively known here as Muhyeopji.
These are books about martial art heroes and heroines who spark the imagination of readers.
The books are read by teenagers and adults who often got their first taste for the genre when they were young.
“One way to prepare for my exams was to impose a rule on myself that for every textbook page I read, I would allow myself to read a page of a Muhyeopji,” says Lee Jin-won, 39, a professor at the Korean National University of Arts.
Going back decades, Muhyeopji was not considered a legitimate genre of literature. The books were printed on the cheapest paper and came in the form of small paperbacks where the content was written vertically.
Middle and high school students would read them, drinking in a hero’s story that always had a similar plot ― a totally powerless nobody would one day get his hands on a secret martial arts manual, catapulting the finder to the status of an unstoppable hero who defeats the evil forces that had killed the hero’s loved ones. Needless to say, the hero would also be the most popular man on earth, loved by female friends and foes alike.
In a country known for the murderous hours spent at schools and cram institutions, for most, reading such books was a hobby that parents didn’t like.
“I read them like crazy but when I see my own child reading them I get a little bit worried,” admits Yuk Hong-ta, a researcher on the genre. The books often vividly portray sexual relationships.
Nevertheless, despite the unease of parents, the genre has survived, thanks mostly to the simple story line and easy content.
Today, the genre has emerged from the shadows and moved into the limelight. Regular publishers put out Muhyeopji, while TV stations are increasingly borrowing from the genre for ratings.
Yang Woo-seok, 42, known as Cho Woo within the industry, is now busy writing a screenplay for “Bodyguard,” expected to air next year. It is based on his book of the same title that consists of 10 volumes. It was published last year.
For Yang, it’s all about diversifying his product range to be more profitable.
“With publishing books just domestically there is a limit,” Yang says. “Exports to Chinese-language countries or joint developments with game developers or the movie industry is an investment with an eye on future markets,” says Yang.
Jang Jae-hun, known to readers as Jwa Baek, has turned one of his novels into an online game. Both writers were once devoted readers of the genre before they decided to write their own stories. Nevertheless, circumstances in the industry have forced writers like them to work in a different environment. The number of libraries stood at 35,000 a decade ago but has shrunk to a mere 5,000, endangering the main route through which authors reached the readership. Thus, going online has become another way to reach the audience.

From left to right: “Bodyguard,” a Muhyeopji novel, was written by Yang Woo-seok, also known as Cho Woo; “Daejagaekgyo,” written by Seo Hyo-won; “Gwonwangmujeok,” also written by Yang; and a scene from “Damo,” a popular MBC-TV series aired in 2003 in which the main characters are all highly trained in martial arts.

The reduction in the number of libraries has prompted authors to develop different routes to get their books to readers. Ha Ji-eun’s “Ice Forest” was introduced through bookstores earlier this year with high-quality bindings. Currently, about 6,000 copies have been sold, considered a solid start in the industry.
The use of the Internet has also changed how authors make it into the world of Muhyeopji. Nowadays, more aspiring writers announce their work at clubs of like- minded people and then try to post their work first on the Internet. Success often leads to publication. “The Sword of the Emperor,” written by Lim Mu-seong, is a case in point.
The Internet has also had an impact on the demographics of the readership.
“Before, readers would be evenly spread across a range from teens to people into their 50s,” says Geum Gang, president of the Korea Popular Literature Writers’ Association, who is regarded as one of the first generation writers. “Now the readership has shifted to teenagers.”
As the number of viewers online can determine whether an author becomes successful, Geum explains that the content of the books are increasingly geared toward teenagers.
Texts that were heavy on Chinese classical languages and traditional Eastern philosophy concepts are now easy to read. Content is geared not only to martial arts, but often contains fantasy and science fiction. The standard long training of main characters to become martial art masters is also not a given anymore.
This shift toward a mix of styles is preferred by authors who want to steer the Muhyeopji genre away from being called third-rate literature.
Authors like Lee Sang-woon are also trying their hand at the e-book business to cater to the computer literate younger generation.
Such strategies are vital because books sales alone are not a yardstick anymore. In the past, classic books like “The Smell of Ink,” written by Cheon Dong-jo would sell 1.2 million copies, but “Bodyguard,” which is also viewed as a bestseller within the industry, sold only 150,000 copies.
While Hong Kong and Taiwan were the first places to give birth to the Muhyeopji genre, South Korean books are now exported to such places as well as China.
The long history of the genre has also produced a cadre of authors who have infiltrated a wide spectrum of cultural activities. 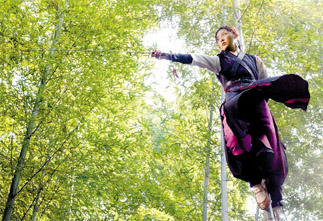 Yu Kwang-nam, a former author and an official of the Korea Cartoonist Association, points out that up to 70 percent of current story writers for cartoons are former authors of Muhyeopji books, while some of these former writers also work for broadcasting companies and as script writers.
“Rather than the potential of the Muhyeopji itself, it is interesting to see how this culture has spilled over into other popular culture,” says Yu, adding that the success in recent years of TV dramas based on traditional martial arts themes such as 2003’s “Damo” has resulted in the firm establishment of similar shows.
Such a change in the overall scene of the Muhyeopji world has also led to publication of books trying to shed new light on the genre.
For a genre that started out in the 1960s through translations of Chinese work but then took on its own form in the late 1970s, it has taken a long time to get to this point.
“What we have now is a mixture of work that reflects the style of the 1980s that aimed to give hope to the readers and an approach in the 1990s to become a more legit literature form,” says Geum.