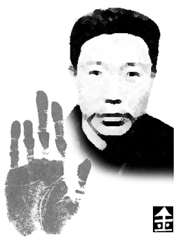 In February 1910, a telegram was delivered to Arasuke Sone, the Japanese resident general of Korea. It was from the governing department the Japanese had set up in Luxun, China after its victory in the Russo-Japanese War.
It read, “We inform you that the execution of Ahn Jung-geun will be carried out on March 25.” It was the court’s ruling, made for the killing of Hirobumi Ito at the Harbin Station on Oct. 25, 1909.
The date of the execution was the same day as Emperor Sunjong’s birthday. Although the Joseon Dynasty, the ancestor nation of Korea, had lost its sovereignty at the time, an emperor is still an emperor and for the resident general, the nation’s disturbance was an issue. That is why Sone requested the execution to be postponed for a day. This alters the widely held view that the Japanese had chosen the same date when Ito had been assassinated. This fact is recorded in the foreign affairs historical documents in Japan.
One day before the execution, Ahn Jung-geun’s two brothers, Jeong-geun and Gong-geun, came to visit. Ahn Jung-geun said to his brothers, “I was prepared for this result and I have done all I need to and do not fear death.” He requested his brothers to take good care of their old mother. At the execution site, Ahn stood resolute. According to the record of interpreter Sueki Sonoki, he was so calm that there was nothing different from any other day and he met his death calmly with few words. In his last words, Ahn said, “I did this solely for the peace of Asia, not because I hated Ito so much, whom I had not even seen in person before.” He also suggested shouting “Peace for Asia” together. However, his last wish did not materialize.
Digging for the remains of Ahn will start on March 25 in Luxun. Let’s hope this is the chance to fulfill our duty as his descendants, which we haven’t done for the past 100 years. In addition, I hope that a biography of Ahn will soon be published. There was an autobiography he wrote when he was in prison and a biography that Park Eun-sik wrote before the liberation of Korea. But it is commonly agreed by researchers that there hasn’t been a biography based on new historical documents and fresh investigation. As an example, in one piece of writing Ahn mentioned his feelings on the day before he carried out his plan to assassinate Ito. Another example is the false story about deciding on Ahn’s execution date.
There will be many memorial projects since it is the 100th year since Ahn’s death, but the highlight of the memorial project would be publishing a good biography with real facts.