Winning a medical suit is no easy operation

Winning a medical suit is no easy operation 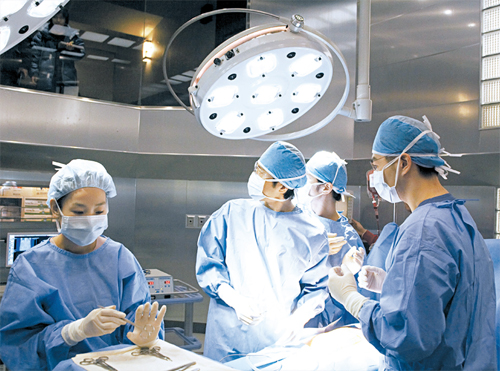 “My breasts were just fine,” said a 42-year-old female patient wanting to identify herself only by her last name Kim.
Kim is suing a general hospital after she was given what she believes was a needless mastectomy. The hospital in question is arguing that there was no wrongdoing on its part.
“If the biopsy was wrong, it’s not only Kim who has a problem,” says Kang Tae-eon, Secretary General of the Consolidation for Medical Consumers, a civic group that helps protect consumers from medical malpractice. “There will be probably another patient who was diagnosed with cancer but was notified too late.”
In his line of work, Kang frequently comes across such cases. He blames the chronic situation on a shortage of manpower in hospitals that is growing bigger without adequate staffing.
“Recently, general hospitals have been trying to grow by adding hundreds of beds, but the number of doctors and nurses is staying the same,” says the official. “We are concerned that this will lead to an increase in medical accidents.”
Last year, the organization consulted on a total of 1,800 cases. The Korea Consumer Agency helped 1,156 cases in 2006 get to court; there were only 450 cases in 2000.
Industry experts say the increase is explained by more awareness among consumers of their rights. So what are the chances of patients winning against hospitals or doctors?
According to the Seoul Central Court district, 49 percent of patients who filed a claim won their case in 2006, compared to an average of 60 percent in the late 1990s.
The decrease in the number of successful cases is due to changes in the way judges view these cases, experts say. In the past, the judges were easily swayed by sympathy for the patient.
After the Asian financial crisis in the late 1990s, even doctors had to undergo hardships. Their relatively high social status suffered, erasing the commonly held notion that doctors held socially superior positions.
“Unless a doctor is God, you can’t ask the doctor to take responsibility every time if the results are bad,” argues Hyeon Du-ryun, a lawyer for the Seoul Medical Association. “Compared to the past, the court is trying to understand the situations that doctors face,” says Hyeon.
Until now, considering patients usually lacked the expert medical knowledge needed to make their case, the law courts were generally lax when asking patients to prove the connection between a medical accident and the aftereffects.
But recently patients have been asked to make stronger cases, and increasingly the courts have decided in favor of doctors. apparently operating under the notion that it is unlikely that well-trained medical experts will make mistakes.
When it comes to plastic surgery or dermatology, the court is focusing on whether doctors have told patients in advance about possible side effects.
Experts say that when it comes to medical lawsuits, people tend to think that a big chunk of money is waiting for patients. But the reality is compensation for damages in medical cases tends to be half the amount compared to traffic accidents.
This is because the courts’ final verdict is often influenced by self-imposed guidelines that acknowledge the limits of today’s medical technology, thus doctors should not be asked to take full responsibility.

That is why, for instance, the family of a senior citizen over 65 who died due to medical malpractice would only receive about 30 million won ($29,880) in compensation.
Seo Sang-su, a lawyer specializing in medical lawsuits says in most cases mutual agreement should be reached. “The remaining family members often think they will get tens of billions of won, but there are not that many cases in which anything above 30 million won is offered as compensation,” says Seo.
He points out that cases can stretch out for three years after the first hearing and the appeal. He estimates that if the payout does not exceed 50 million won, there is little practical benefit in pursuing the suit.
Lawyers advise that patients, or their families, obtain medical records as soon as possible after an accident occurs. Hospitals are required by law to disclose such records.
“Sometimes there are cases in which doctors or hospitals act as if there is a need to put additional information into those records. That is why you have to obtain such information immediately,” says Yu Heong-jeong, hinting that doctors might try to alter records if they feel they could protect themselves.
Yu recently won a case in which 150 million won was paid to the parents of an infant who suffered brain damage as a result of a delay in deciding to administer a cesarean section when the mother experienced difficulties during labor.
Hospital records revealed that the doctor in charge was aware that the unborn child had cyanosis, a blue or purple discoloration of the skin that occurs when a person is not getting enough oxygen. The family argues that the medical staff should have acted faster.
The doctor involved in the case, however, claimed that the baby fell ill only after it was moved to a bigger hospital when its heart rate dropped.
Experts say that patients should become regulars at a hospital or practice, which could give the patient free advice in case something goes wrong at another hospital.
They also say that, generally, operations on Fridays or long breaks should be avoided, as responses to emergency situations could come in late.