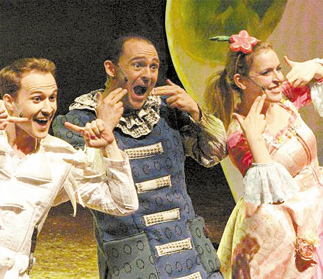 The cast of “Teeth.” Provided by the company

Cleaning your teeth should be the simplest job in the world, but in today’s busy world it’s easy to skip a quick brush and floss after every meal.
That’s why “Teeth,” a kids’ musical performed in English by Theater Seoul, is likely to make children and adults feel guilty about molar maintenance.
In the drama, Prince David travels into the woods in search of a sleeping princess, whom he wakes with a kiss. However, when the princess wakes up, instead of a happily-ever-after ending, the princess refuses to spend the rest of her life with Prince David because of his appalling breath.
As much as the prince likes the princess, he also has a weakness for candy.
Suddenly an evil cavity monster pops out of David’s rotting teeth and kidnaps the princess into the prince’s decaying teeth.
In order to save her, David has to clean his mouth and quit drinking Coke and scarfing the sugary sweets that are rotting his teeth.
The prince has a hard time giving up the foods he likes most, but he has to in order to save the princess from the cavity monster.
Teeth is a rarity in Korea because it is a musical sung entirely in English by Korean-based actors and singers. Other troupes that use English tend to be visitors from overseas.
The aim of the musical is educational as well as entertaining. It’s not high art and you wouldn’t impress your date if you took her or him to one of the shows ― your partner might think you are dropping a very heavy hint.
The actors are Barley Curtin, Arthur Johansen, Amanda Roveda and Molly Berg. All four appear on EBS television shows. The show is directed by Margaret Whittum.
Theater Seoul was founded in October 1995 as a creator of original drama aimed at kids in Korea.
In the last 13 years, the group has staged a number of musicals aimed at a younger audience, including “Ali Baba and the 40 Thieves,” “Alice in Wonderland,” “Peter Pan” and “Beauty and the Beast.”