The many faces of poverty

The many faces of poverty 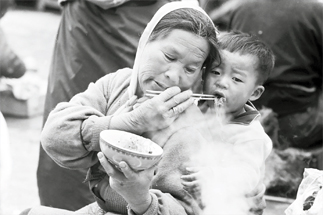 A grandmother feeds her grandchild noodles on a street in Busan in 1965. Provided by the GoEun Museum of Photography

BUSAN ― One day in college Choi Min-shik was stunned as he turned the pages of the photo collection.
The images touched him deeply and he knew at that moment that he wanted to become a photographer.
That was 1955 when Choi was studying art in Tokyo. He came across the photo collection in a secondhand bookshop. The pictures were from the Museum of Modern Art in New York and the book was “The Family of Man.”
The intensity of the pictures ― the wrinkles and chapped skin of the subjects ― inspired Choi, now 80, to become a human documentary photographer, he says.
Until he picked up the book, Choi had never thought of photography as an art form. He considered it a Western luxury.
The book made him realize that photography was more than art. It was also a means of documenting social ills.
Choi had stowed away on a ferry to Yokohama in 1955. He needed to make money and spent two years in Japan illegally. When he got back to Busan he found a full-time job as a photographer at the Korea Charity Society. This organization helped raise money for poor people in Korea by sending photographs of their poverty to the West.
Choi took the job because he knew he was helping to save lives.
Koreans were suffering in the aftermath of the Korean War (1950-1953) and during the subsequent years of the military regime, especially in 1961 when a military coup d’etat left the country in turmoil. At that time, Choi said, creativity and the freedom to express oneself were not options.
“It may sound ironic, but I find more life force and passion in those ragged and uneducated people,” the photographer said.
Those in power, Choi thought, held the reins of power and could control ideology and history. This situation motivated Choi to capture images of the innocent and the powerless.
Choi’s only weapon against the military government was his camera, he said.
But the government constantly harassed him at work. The late Korean president at the time, strongman Park Chung Hee, was concerned that Choi’s photos were giving the West a negative image of Korea. What his regime wanted were photos of the country’s advancement.
“The country did develop with its five-year export-oriented plan, which overcame some aspects of poverty in Korea,” said Choi. “But people’s rights weren’t restored.”
With the voices of opposition restricted, college students, nongovernmental organizations, religious groups and artists coalesced in a democratization movement.
“But the government ignored us and refused to relinquish its grip on power,” he said.
Choi had his camera with him at all times to record the hard times, strong in the belief that photographs were an honest way of tackling corruption and the abuse of power.
As punishment for his supposed photographic transgressions, he was frequently dragged into the offices of the Korean Central Intelligence Agency.
The authorities banned him from taking pictures and an intelligence agent accompanied him wherever he went.
“The regime liquidated freedom,” Choi said. “There were always people who were poor. I didn’t photograph what wasn’t there. A camera cannot lie.”
His philosophy is that art doesn’t need to be fancy or noble. Instead, it should be based in life experience.
If he was confronted by poverty and instability, that’s what he photographed.
Choi has published a series of 13 photography books called “Human.” Some of the pieces are currently exhibited at the GoEun Museum of Photography in Busan. The exhibition runs through Sunday. 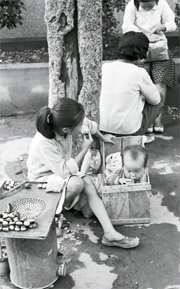 A baby has an apple box for a crib in Busan in 1972. Provided by the GoEun Museum of Photography

“Life is all about agony and persistent life force,” said Lee Jae-kyu, the director of the museum. “Choi’s photo documentaries deliver us realism and humanism. His photos are records of modern and contemporary Korea.”
The pictures are mostly of his hometown Busan in the 1970s.
Though some renowned galleries in the United States and Japan invited Choi to hold exhibitions, the Korean government didn’t issue him a passport.
Instead he sent the negatives of his photos, which led to one unforgettable incident.
Choi sent his films to the FNAC Gallery in Paris, but he was told that the director had not received them. He later found out that the director was connected to people high up in the Korean Central Intelligence Agency.
Choi turned pale with fright when he heard the news: The negatives contained many pictures, but most of all they contained his soul.
The Park government at the time had created an anti-North Korea environment. It accused Choi of being a spy for the North on several occasions. He was arrested and held in police custody for up to two days.
As a sign of the times, if a South Korea citizen turned in a spy during the military regime in Korea, he could expect a 30 million won ($30,060) windfall, courtesy of the government.
The camera Choi carried made him a figure of suspicion in many people’s eyes back then.
Those suspicions nearly proved prophetic in 1968 when a spy arrested on Ulleung Island in the East Sea (Sea of Japan) had Choi’s first photo collection among his possessions.
“I sweated with fear,” Choi said.
Fortunately, though, Choi had not signed the spy’s book of his pictures, and Choi was not arrested.
Today, conditions have improved, but Choi still faces challenges.
“Korea isn’t poor anymore, not like in the 1950s and 1960s. There aren’t many slums anymore. People today are also aware of portrait rights,” Choi said.
When he photographs people on the street or at Jagalchi Market in Busan, his subjects turn away.
“Since the country is so developed now, people don’t have the facial expressions I like the most,” Choi said.
That’s why Choi has started to visit developing countries. He’s planning to visit refugee camps in Uganda later this year. He hopes to use the photographs he takes to raise money for the people there.
However, his daughter has criticized him in the past for exploiting the poor to make money for himself.
Choi argues back. “The beauty I pursue is defined by society,” Choi said. “The photos I take involve humans. What I portray is what’s actually out there in the real world.”
Choi notes how art today, including photography, is too superficial.
“Art can only be created through suffering,” Choi said.
Perhaps that’s what accounts for his favorite musician.
“Beethoven turned deaf at 36 and died at 57. In 21 years, he composed 760 pieces of music but he suffered because he could not hear his music,” Choi said.
If the composer were alive today, he would bring him cheese and wine and ask if he could take his portrait.
“Photographs today are too commercial,” Choi said. “They are too often edited with Photoshop, which removes realism,” he said.
To Choi, photos should be honest and straightforward, not fabricated.
“Photos are realistic and objective. There’s truth inside, not ideology.”
The 69 photos exhibited at GoEun Museum of Photography are all untouched pictures. He didn’t use lights or tripods.
Or Photoshop. 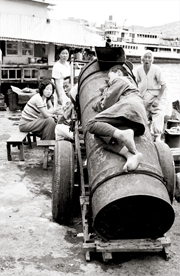 A child sleeps on a water tank beside the harbor in Busan in 1963. Provided by the GoEun Museum of Photography


To reach GoEun Museum of Photography, take the KTX from Seoul Station to Busan. The three-hour KTX ride costs 45,500 won ($45.09). Take a taxi, bus or subway from Busan Station to Haeundae Station and take exit 3. The museum is across from Haeundae District Office.
For more information about Choi Min-shik’s retrospective exhibition, call (051) 746-0055 or visit www.goeunmuseum.org.