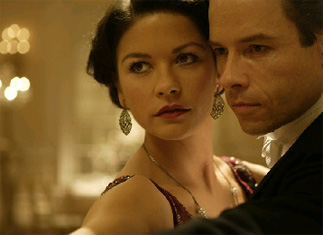 Mary McGarvie (Catherine Zeta-Jones) is a scam artist touting a show around Edinburgh’s creaky music halls in 1926 with her 13-year-old daughter, Benji (Saoirse Ronan).
As mystic Princess Kali, McGarvie cons audiences into believing she can contact the “other side” using her exotic psychic powers.
It’s mumbo-jumbo, of course, but she and Benji, her “dusky disciple,” convince one poor sap in a packed theater that they are channeling his dead wife.
In actuality, it is a setup, but the scene outlines the science vs. superstition theme central to the story when real-life escapologist Harry Houdini (Guy Pearce) arrives in the Scottish capital.
The American showman is offering $10,000 to any psychic, clairvoyant or seer in town who can reveal the exact words his dying mother spoke before she died. The challenge is not just about the money: The successful psychic will prove beyond doubt that an afterlife exists.
McGarvie and her psychic sidekick Benji take up the challenge, breaking into Houdini’s hotel room and theater dressing room to hunt for clues.
But guess what? Houdini falls in love with McGarvie, a plot development so unlikely that the characters themselves seem confused.
This is a shame, because if I have seen and liked two similar films ― Christopher Nolan’s “The Prestige” (2006) and Neil Burger’s “The Illusionist” (2006) ― and thought DDA might prove comparable. It didn’t. Both the 2006 movies are better scripted and, well, more interesting. Both films boast finales that were surprising, whereas Death Defying Acts splutters to a low-key conclusion.
I don’t mind ambiguous endings or to be left pondering “What happens next?” as the curtain falls, as in Alexander Payne’s “Sideways” (2004). A good film wraps things up or leaves you wanting more. It’s that simple.
But DDA just left me confused. If I was to leave the theater in a less than grumpy mood, I needed to know if McGarvie, or at least Benji, really does have the gift of so-called second sight, and whether Houdini believed in Benji’s theatrical seizure as she apparently channeled his mother.
But what really twisted my nonexistent beard is the decision to select the “love story” plot option, which only served to highlight a dearth of imagination at the writers’ meeting.
This decision throws up too many unanswerables. Did Houdini really love McGarvie, or was it just a sick mother-love infatuation? What did he want from McGarvie?
And despite a strong cast, Benji is the only character who matures in an interesting way, revealing conflict as she learns that adults lose the child’s gift to imagine.
In fact, Ronan, who upstaged the entire cast of “Atonement” as Briony, is the best element in this film. There are roles as yet unwritten that this gifted actress will flesh out over the next few years.