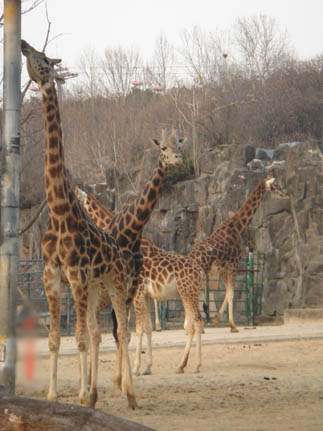 Leggy giraffes reach out to visitors.

Where in Korea can you go for a brisk stroll in the savannah, track a pride of lions, sample contemporary art and ride a rollercoaster?
At Seoul Grand Park in Gwacheon, Gyeonggi, one of the country’s main zoos.
If you take subway line No. 4 to Seoul Grand Park Station, you will land at the front gate of the park.
Here visitors face a choice: Take a tram to the park, which features 3,400 animals, or visit the National Museum of Contemporary Art, which is located next door.
If the weather’s pleasant, you can skip the tram ride and walk to either the park or the museum.
The day I went many people chose to walk the 25 minutes to the park-museum junction, but for people like me who consider chess a contact sport, the tram is the best option.
The entrance fee for the park is 3,000 won ($3) for adults, but for kids aged 4 to 12 admission is 1,000 won. Anyone in between those age groups gets charged 2,000 won. 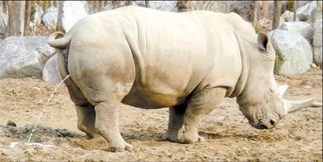 A rhino answers the call of nature. By Brian Lee

The park is open from 9 a.m. to 7 p.m. from March to October.
Inside the park’s main gate visitors face another choice: a lift to the highest peak of the zoo, from where you can descend towards the gate, or just take the traditional frontal approach.
If you are unafraid of heights, take the lift; but if you suffer from vertigo, start at the front gate of the zoo and work through the different compounds.
I am not comfortable with heights but I didn’t want to have to walk uphill. So I took the lift, which costs 4,500 won. A package including your entrance fee to the zoo, a one-way tram ride and the lift costs 7,500 won.
I get nervous when I am suspended from a cable and the metal cage I am sitting in is blown around by the breeze, so I didn’t feel that great in the lift.
But the views were very pleasant, though I had my eyes shut most of the time.
The lift does not pass directly above any animal compounds. That’s for safety reasons, although I reckon if we fell into the lap of one of the animals, they would be more scared than us.
The lift terminated next to the wild cats zone where you can spot leopards, Siberian tigers, pumas and Amazon jaguars.
An 8-year-old white tiger is the most eye-catching of these feline creatures. They are extinct in South Korea, but are said to number a dozen or so in the Mount Paektu area.
These magnificent cats live chiefly in Afghanistan, China and Nepal. Not far away from the wild cat compound is the venue of the dolphin show, which lasts half an hour and is well worth viewing for both adults and kids.
The first half has two seals performing while the second half is dedicated to four dolphins and their trainers.
If you don’t have a digital camera, rent one at the camera shop located near the front gate of the zoo. Here you can get your shots burned onto a disk.
The first-aid and information desk is also located near the gate.
If you want to see cats getting frisky I strongly recommend visiting the lions’ den at feeding time.
You get to see the otherwise snoozing lions leap around as the zookeepers throw them fresh meat.
The advance of science has infiltrated even the zoo as it has a pair of genetically engineered snuwolfs, a dog-wolf combo, or so the zoo claims.
How long it takes for you to see all the animals at the zoo probably depends on your level of interest, fitness and whether you have several kids in tow.
But three to four hours should be sufficient, including the occasional rest.
For sure, it’s the ideal place for a family outing or a date. There are plenty of rest areas and toilets provided.
Families should try to go to the compound exclusively housing animals too young to be on their own or with others. These pups are usually fed by zoo staff until they reach a certain age. 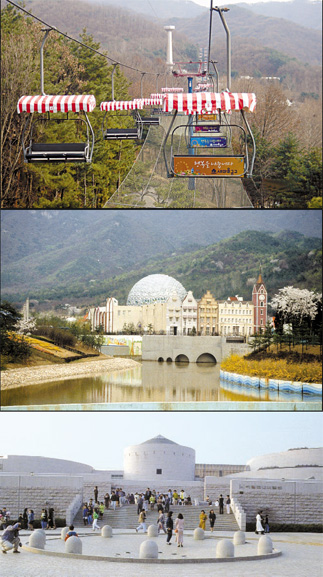 From top to bottom: The ski lifts transport visitors to the highest point in the zoo; SeoulLand; and the Museum of Contemporary Art. By Brian Lee, [JoongAng Ilbo]

But be warned: If you spend too long gazing at these cute cubs, you might get locked in. The compound closes at 4 p.m.
“In some cases, the mother abandons the cub or is too weak to take care of it. That’s when our experts jump in and look after them,” says Kang Hyeong-wook an official at the park.
“The tiger cubs stay in the compound for up to three years, whereas grazing animals such as deer stay for only two weeks,” Kang says.
After walking in the outdoors and absorbing the distinctive smells of the zoo, you can stop by the National Museum of Contemporary Art.
The permanent exhibition halls cost 1,000 won to enter; the fee to see the special exhibitions is another 3,000 won. Kids aged 8 to 18 get in for half price, and those under 7 get in for free.
The museum is open from 10 a.m. to 6 p.m., while on weekends visiting hours extend to 9 p.m.
The museum moved to its current location in 1986 after first opening in 1969 at Gyeongbok Palace in Seoul.
Visitors can look at modern Korean art and appreciate how it developed and reached its current form.
The museum is currently holding a special exhibition on newly acquired items from last year. Included are works from the late video artist Paik Nam-june.
A total of 132 artworks will be on display at the museum’s main exhibition hall until April 27.
SeoulLand, one of the country’s largest amusement parks, is less than five minutes by tram from here.
It’s open from 10 a.m. to 6 p.m. on weekdays. An all-ride pass costs 29,000 won, while the Big 5 pass costs 26,000 won, giving access to the park’s main attractions, such as the roller coaster. 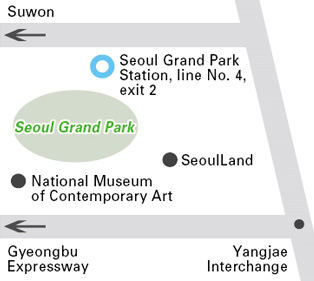