The burning issue of a big, fat cigar

The burning issue of a big, fat cigar 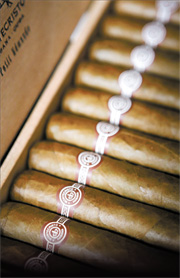 In Korea where more than 8 million adults light up every morning, cigars have never really caught on. From time to time we spot people in dark alleys downtown hawking cheap cigars that crumble before they even get lit, but cigars remain a rarity in Seoul, and perhaps even more so in other cities in Korea.
But cigars are hardly known here.
Last Saturday night at Moghul, an Indian restaurant in Itaewon, 20 cigaristas met to compare their smokes over a glass or two of wine or Coke.
It was the monthly meeting of the Seoul Cigar Aficionado Society.
As a light rain fell in the dark outside, the room which the smokers had taken over for the night was filled with the tranquil scent of burning cigar.
They sat under what looked like a tent, a temporary structure made of transparent plastic. (The idea is to isolate the smell of the cigars from other diners.)
Oddly enough, the bad weather didn’t irritate the gathered smokers. On the contrary, the makeshift lodgings created a cheery atmosphere.
“We smoke cigars to unwind and to socialize,” said Jonathan Muniz, 36, a U.S. military serviceman who traveled down from Panmunjeom to participate in his first meeting at the club.
Muniz said he has been a cigar smoker for nearly 15 years. “My father never smoked but my grandfather did,” said Muniz.
According to the military man, cigars are not addictive like cigarettes. “It is a refined hobby,” Muniz said.
Of course, science and doctors disagree, and this is purely Muniz’s personal take on cigars.
Vincent Lee, 35, the founder of the club and president of the cigar shop Maska’s in the J.W. Marriott Hotel, thinks of his hobby as a “higher level of enjoying life.”
It was clear all members of the club agreed.
Finding a venue for their meetings is not easy. “It seems it’s O.K. for people to light up cigarettes, but if you get out a cigar the bar owner usually comes over to your table and asks you to put it out,” said Erik Warme, 33, another U.S. military serviceman.
“It’s really hard to find places that accept cigars,” added Warme, who has been smoking cigars for four years. His taste for cigar tobacco began at a bar one night. “I wanted to try so I bought a cigar with a drink,” Warme said.
Some of the few places that allow people to smoke cigars are Gecko’s, Bungalow and Suji’s, bars which are located in Itaewon.
The men said they didn’t mind the paucity of venues. “We enjoy our cigars but we don’t want to offend those who don’t,” said Muniz.
So what’s so special about cigars compared to cigarettes, other than the size and the nicotine concentration?
“A cigar has a refined taste unlike a cigarette, which tastes a lot like an ashtray,” Luis Verela, 30, a paramedic at a U.S. military base.
Warme described smoking a cigarette as offensive, but said cigars are much milder.
“You don’t have to keep inhaling at a fast rate when you’re smoking a cigar,” said Muniz.
Verela said he has smoked cigarettes since he was 14. He switched to cigars a year ago. He said the texture and feel of a cigar is unlike any cigarette he knows.
The people at the club talk about cigars in much the same way a sommelier might discuss a fine wine. Each cigar has a character and a flavor that is distinctively different from another, they say.
Theodore Kwak, who co-manages the cigar club and is the general manager of Maska’s, said harvesting cigar leaf is very similar to harvesting grapes.
“The quality of the land where the tobacco leaf is grown and the way the leaf is matured results in different flavors and characteristics,” said Kwak.
“Also like wine where people drink to enjoy the taste and not because they want to get drunk, people smoke a cigar not to satisfy their nicotine addiction but to enjoy the flavor,” he added.
Butch Poole weighed in with a firm agreement. “A cigar is like a fine wine and the ones we smoke at the club are handmade, a real work of art,” he said.
The general feeling among the Korean cigar aficionados at Moghul’s is that Cuban cigars are the best.
Poole was puffing away on a Partages Serie D. No. 4, a Cuban cigar that’s not available in the United States. He and the other Americans at the club say they settle for Dominicans and Filipinos back home.
Non-Cuban cigars were passable, they said, but the Seoul smokers clearly favor Havana leaf. 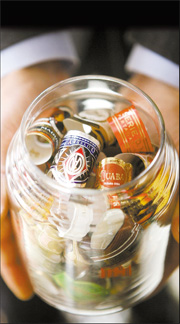 Poole said he liked to enjoy a smoke on his patio with his grown-up sons and a single malt whiskey. A cigar can last an hour and a half, Poole said, making it a great way to enjoy the slow evening.
“I like Koreans and the way they work so hard amazes me,” said Poole. “But Koreans can forget how to enjoy life slowly.”
Cigar smokers also get particular about how they handle their cigars. Poole said he likes his cigar punched rather than snipped. Punched is when you bore a hole into the closed tip of the cigar using a small tube-like gadget.
Poole said he preferred his cigar to have a clean tip; he doesn’t like getting flakes of leaf in his mouth.
There are even different ways to light a cigar. Poole lit his cigar with a match. “I like the old-fashioned way,” Poole said.
Warme said it was O.K. to use a lighter, as long as you don’t use a butane lighter like a Zippo.
“The fumes from the butane gas will destroy the original flavor,” said Muniz.
Warme carries his own cigar in a slim black humidor that has a tube in the shape of a cigar filled with crystal. The crystal is supposed to keep the cigar moist.
“You want your cigar to be moist,” advised Muniz. “A cigar should be placed in humidity of between 60 and 70 percent,” said Muniz. “But I like mine at 75 percent.”
After everyone had partaken of their cigars and the buffet, Kwak stood in the middle of the tent with a gigantic cigar encyclopedia, which was published in 2005.
He then introduced the Diplomaticos Habana.
According to Kwak, reading from the encyclopedia, these exclusive cigars were given as gifts to high ranking officials and manufactured for the French market.
The premium cigar has a milder taste compared with other Cuban cigars.
Kwak sold the cigars at 13,000 won ($13) apiece to anyone wanting to try.
When asked if he was worried about his health, Muniz said, “I have been to Afghanistan and Bosnia. Smoking a cigar isn’t on my top list of health concerns.”
So what do the wives think about their husbands’ hobby? Pat Poole said it really doesn’t bother her. 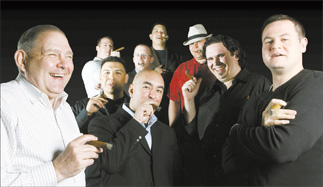 Members of the Seoul Cigar Aficionado Society. By Jung Chi-ho

“He doesn’t smoke often, just once in a while,” she said.
Choi Hye-jin, Lee’s wife of three years, said it didn’t bother her either, as she thought it wasn’t addictive and her husband only smoke once in a while.
Later in the evening, the two wives also lit up, the tips of their cigars glowing in the dark.
Lee said the club has been around for six to seven years. He has an e-mail list of some 300 people living in Korea, and 30 or so regulars show up at the monthly meetings.
Lee said he smoked his first cigar in New Jersey when he was in his early 20s.
“I always wondered what it was like to smoke a cigar so I walked into this store and bought one,” Lee went on.
The store owner showed Lee the different cigars and the two sat down with a Scotch and smoked.
Lee’s wife even had their balcony redesigned to accommodate a cigar lounge.
“He doesn’t smoke in the apartment since we had our baby,” she said. “And when he does smoke, no-one complains among our neighbors because we live on the top floor.”
Despite the cigar smokers’ enthusiasm, cigar smoking is a potentially lethal pursuit.
Kim Il-soon, chairman of the Korean Association of Smoking and Health, said despite rumors that cigars are less risky to health than cigarettes, smoking cigars does pose a health threat to the smoker and to people around them
“People inhale less when smoking a pipe or a cigar because it is stronger than a cigarette,” Kim said. Mouth and lung cancers are linked to cigar smoking, he said.
The U.S. National Cancer Institute warns that cigar smoking is unhealthy and habit forming.