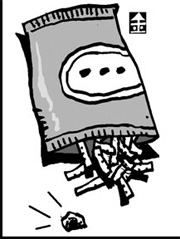 Three things threaten food safety: biological, chemical and physical hazards. Of these, guarding against biological hazards, or food poisoning, is the most important to public health. If you have an upset stomach and diarrhea after eating, there’s a 95 percent chance that it was due to food poisoning.
Chemical hazards refer to pesticides, antibiotics, heavy metals, environmental hormones and mold. These are the most feared by the average person, but to a food expert, they are less serious threats because they turn up in small amounts and even if damage has been caused, it surfaces years later. A rat’s head, a knife blade, an earthworm, a fly, a larva, a piece of a conveyor belt ― these foreign materials that have occasionally invaded our food are physical hazards.
Of the foreign material accidents in South Korea that are worth remembering are the lead crab contamination in 2000 and the parasite eggs found in kimchi in 2005. Lead is a heavy metal categorized as a chemical hazard and parasites are biological hazards. However, both lead and parasite eggs are considered foreign materials.
The two accidents caused immense losses to the respective enterprises. Many crab eateries closed down and kimchi producers were dealt a heavy blow. Although the incident was brought under control when it became known that parasite eggs almost never contaminate food, kimchi exports to Japan were beaten out by Chinese products.
In our Food Code, principles state that no foreign materials should be in food. However, even in developed countries, not all foreign materials can be detected. Of the 1,309 consumer complaints registered with the U.S. Department of Agriculture between January 2001 and September 2002, 331 complaints, or 25 percent, had to do with heavy metal, plastic or glass materials. Even with equipment running to detect foreign materials with 99.999 percent precision, 10 out of a million times, something is missed. Even in companies where workers wear goggles and spacesuit-like clothes to detect foreign materials, they are not 100 percent successful.
According to internal documents and three-year statistics of eight food companies in Korea, foreign materials are found in food due to mistakes by the producer (15-20 percent), mistakes by the consumer (25-30 percent), consumer fraud (1-2 percent), and wrongful distribution and storage (51 percent).
It should be of some consolation to consumers that, according to Doug Peariso’s “Preventing Foreign Material Contamination of Foods,” as long as foreign objects are not maliciously inserted, health victims are rare.