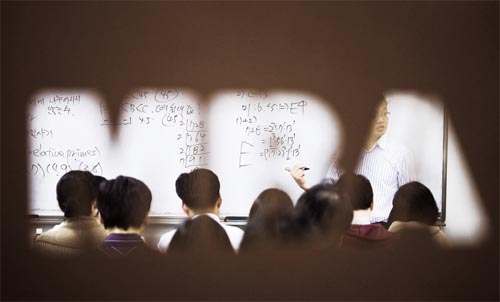 MBA school applicants take lessons at a private institute that helps them prepare for the GMAT. Some have given up jobs in pursuit of the degree.


It can be a long hard road to get the big bucks, but plenty of people are willing to pay the price.
MBA school applicants frequently have to study their brains out.
The exam to qualify is as competitive as any in the country, including the civil serve exam and the Korean bar exam.
How fierce is the quest?
There are Koreans who quit their jobs to study for the MBA exam and others have been banging on the door of MBA schools for more than two years.
Some spend large amounts of money on private prep programs to try and gain an edge.
One 34-year-old, who wished to be identified only as Lee, has spent 20 million won ($20,440) in the last two years preparing for the MBA.
Here’s the breakdown.
Lee has invested 2 million won on private institutes that prep those who want to take the Graduate Management Admission Test, 5 million won on essay consultation and another 5 million won on translation.
Last year he applied to 10 schools and the application fees totaled 2.5 million won. To demonstrate his passion for getting into MBA school, Lee spent 2 million won on airfare to alone for a face-to-face visit with school officials last month.
Lee estimated that he could spend an additional 200 million won for tuition to puruse an MBA degree.
Lee said the huge investment won’t be a waste as long as he eventually gets in the door to a good school.
“I heard of a person who spent more than 10 million won on plane tickets just to make a good impression on a school administrator,” said Lee.
With the rising competition among MBA applicants, exclusive services have popped up.
In applying to a business school, applicants must take the GMAT and Test of English as a Foreign Language along with an essay.
Later the school will interview potential students.
There are about 30 companies that offer professional help to people along the long and winding road to an MBA.
There are fewer than 10 outfits that run study rooms exclusively for those preparing for an MBA. Private lessons to prepare for interviews is another popular niche business catering to MBA chasers.
Industry insiders say the MBA preparation business in Korea adds up to several billion won, although there is no specific number kept by the government or other institutions.
Experts say the MBA frenzy has reached dizzying heights.
According to industry sources, every year 3,000 to 5,000 new people join the quest for an MBA sheepskin. Considering Korea’s economy and population, the lust for an MBA is unusual.
The Graduate Management Admission Council (GMAC), which manages the GMAT, reported that between July 2006 and June 2007, a total of 6,811 Koreans applied for the exam. That figure also includes those who took the test more than once. That is the third-highest number of applicants, excluding the total in the United States. India had the most applicants with 21,481 and China was second with 13,048.
However, only 500 or so are admitted every year to the world’s top 50 MBA schools. 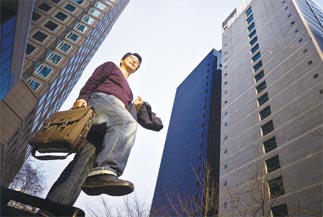 Lee Dong-gu, an MBA expert in Seoul. Many Koreans today are applying for MBA schools . Lee and other experts, however, say applicants must have a distinct goal to gain admission to business schools. By Kwon Hyuk-jae

Moreover, only about 150 are admitted to top-10 schools like Harvard, Stanford and Wharton.
In order to get into a top-10 school applicants must compete against 50 to 1 odds.
And graduating from a prestigious business school does not guarantee an immediate huge salary.
Strategic consulting, investment banks and U.S.-based companies only employ 50 to 80 Koreans with large salaries each year.
“Every year there are hundreds of students graduating from MBA schools, but the openings at companies are limited,” said Kim Soo-mi at Nterway, a head-hunting agency.
The reality awaiting the hard-working graduates is harsh.
But that isn’t stopping Koreans from trying.
In a March survey by the JoongAng Ilbo and Career, a job search company in Korea, 25 percent of people in a pool of 1,984 Koreans already employed said they were applying to an MBA school or plan to.
In the same study, 30 percent said they weren’t sure if they will apply to an MBA school, while 45.6 percent have no plans to pursue business school.
Among people in their 30s and 40s, 28.7 percent said they will apply to MBA schools, while 21.2 percent of those in their 20s plan to do so.
Why are Koreans today obsessed with an MBA?
Jeong Byeong-chan, head of JCMBA Consulting, offered some perspective.
“More than half of the people aren’t satisfied with their job,” said Jeong. “These are types who want to get into an MBA school in order to escape reality.”
A 36-year old researcher who gave only his last name of Lee said it has been 10 years since he graduated from college with a major in engineering.
Lee said he has been preparing for an MBA to get out of his current situation.
“I am worn out by the irrational organizational structure and nitpicking by my superiors here,” said Lee. “Instead of working in the field of engineering, I want to transfer to the financial industry where I can get a large paycheck.”
Some people apply for MBA schools so that they can improve their academic background.
And some think they face disadvantages at work, such as missing promotions, because they didn’t graduate from one of the SKY universities (Seoul National University, Korea University and Yonsei University ― the top three in Korea).
In the same survey, 38 percent of respondents said they were applying for an MBA to build professional knowledge, while 24 percent said they were applying because their future was insecure. 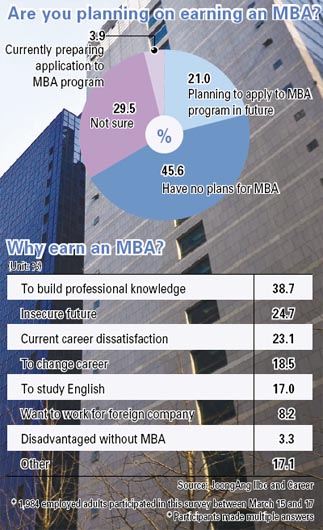 Another 18.5 percent said they were applying because they wanted to try something new; 17 percent said they were applying to study English.
Lee Dong-gu, an MBA consultant and lecturer at PJ English, a private English institute that prepares students for English exams like the Tofel, GMAT and LSAT (Law School Admission Test), said obtaining an MBA requires serious focus.
“People think they can get into an MBA school if they just study hard, like preparing for the college entrance exam or the public servant exam,” said Lee.
But it’s not as simple as learning to score high on a test.
“In general, most of the people who have vague goals don’t get accepted,” Lee added.
Another student, who wished to remain anonymous, once worked as an admission interviewer for the Wharton School.
The student said most of the applicants were applying because they wanted to make money or to start a new career.
“There was a case where a school teacher applied for an MBA,” said the student.
“An MBA only acts as a stepping stone form the previous job and the future; therefore, those without distinct plans and vision are not accepted.”
Experts say the insecure job environment and the undervalued Korean higher education are what triggered the zeal for MBAs.
Han Sang-lin is a professor at Hanyang University.
“The belief in Korea that people can hold a job their whole life no longer exists,” Han said.
“It now seems that young people believe they have to increase their competitiveness with a higher educational background.”
Goo Bon-hyung is president of Goo Bon-hyung Transformation Leadership Center.
“Today young people work hard to get a job and try hard to get out of the job,” Goo said. “Those in their 20s and 30s believe an MBA is an escape route from excessive workloads and the vertical organizational structures here.” oj