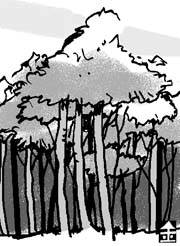 Some say the expression “insistent chunyang” had its origins during the construction of the Yeongdong railway line. An influential lawmaker in the ruling Liberal Party in the 1950s forcibly changed the route and made the railway go through Chunyang. Another story goes that the expression originated from a top-quality pine tree called chunyang in Korean. All lumberjacks insisted that theirs were chunyang trees.
Mount Cheondeung, Mount Jideung and Mount Indeung stretch in a row overlooking Chungju Lake. Mount Indeung is in the middle, glistening with white birches that the late Chey Jong-hyon, former chairman of the SK Group, planted 30 years ago.
The former chairman had a dream. He wanted to plant trees on bare mountains and use the trees for scholarships. When his aides said the plan was not profitable and it would be better to find a spot near Seoul, Chey scolded them. He said no trees would be left when the Seoul metropolitan area developed further.
He searched for remote areas deep in the mountains, particularly rough mountain areas that no one cared about. In the end, he purchased 9,500 acres (38.5 square kilometers), including Mount Indeung and other areas in Yeongdong, North Chungcheong Province.
From 1973 until his death in 1989, he planted trees on the barren mountains, an area 13 times larger than Yeouido, Seoul.
In 1989, the government ordered companies to sell land holdings that are not used for business. Chey donated one-fourth of his land to Chungnam National University to be used for academic purposes. The government wanted to plant evergreens, but Chey refused and insisted on planting birches, which Chey said are excellent quality material for the “Tripitaka Koreana,” the ancient woodblocks carved with Buddhist texts designated a national heritage. They also produce much more oxygen than evergreens. Most of the 3,780,000 trees that the SK Group has planted are birches.
The SK Group has two problems now. The first is when they can legally log the trees. The time frame used to be 30 years but it has been changed to 60 years. That means SK Group needs to wait 30 more years. In Germany, the average time before logging is 200 years. Furthermore, it is uncertain whether birches will grow well in the future because of global warming.
This weekend is Arbor Day. We don’t need to go deep into a mountain, like Chey did. If one person plants one tree, the total number will be 10 times more than Chey had planted.