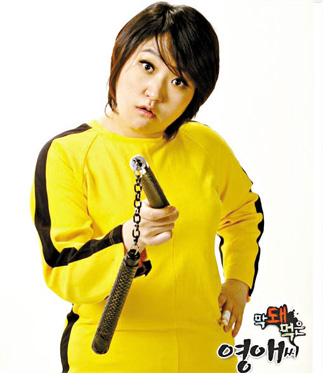 The biggest issue for me now is neither the April 9 election for National Assembly nor the power struggle in the Grand National Party.
Sorry, politicians, but your immature mudslinging for a seat in government is just not my scene right now. Instead, I care about global warming (because I don’t want pretty boys to be an endangered species) and I think a lot about inter-Korean relations (because my grandparents talked about the land that they left behind when they fled the North during the Korean War).
I am worried about global warming and inter-Korean relations. But let me be clear: What I heartily, truly care most about these days is how to age with grace.
I mean, I don’t want to be Ms. H who repeats every single day, “If it were not for money, I would quit right away!” It’s also most dreadful to be like Mr. K whose daily routine is to grumble about everything he sees. Don’t even get me started about Mr. N who thinks he is the smartest guy in the world and poor only because he’s unlucky.
I have only a few years left till I am their age, and I am sensing that there is a chance I might become a greasy old lady who has nothing to offer but complaints about life. I want to remain happy and gracious, but I am learning every minute that it would be a formidable project, after all.
I mean, it’s inhumanly difficult to stay calm amid the hassles of the world, when you have people who think they are smarter only because they are older. I am sure that I am making their lives more miserable because I am such a massive headache.
Life is still livable because I and they have loved ones who have the patience to hear out our complaints.
However, there is a limit to showering loved ones with my share of unhappiness, according to a hard-earned lesson from the past from my patient, kind and loving boyfriend. I must have done something good to have him on my side, but I am also aware he is not a saint with an endless supply of patience.
So I decided to just shut up and tune into a cable TV show, whose title can be best translated as “Ms. Young-ae, the Queen of Rude and Rough.”
Airing Fridays at 11 p.m. on tvN, on cable, the drama is about this 30-something girl-next-door type close to the following definitions: unattractive, driven to drink, lonely and poor.
The drama follows her story at work in documentary format, and the main focus is how rude her bosses and colleagues are to her. Her boss is 50-something with receding hair and dying to have an extramarital affair. He calls her by an insulting nickname that is not fit to print in this paper.
Her colleagues are mostly mean and nasty, but what Young-ae can do is just cowardly revenge, such as putting dust in her boss’s coffee. So the show’s title betrays her character.
For a minor cable TV drama, this series became a hit and it’s now in its third season. Fans of the show say that they unwind watching the show since they can relate to Young-ae’s predicament.
So it’s like a painkiller for office workers in this country. It’s sad that people have to free their minds by reminding them what they hate, but what can we do? We are just wage-slaves worried about our credit card bills.
I realized I devoted only three paragraphs to TV this week. I apologize. But I must have done something bad in my former life to meet Ms. H, Mr. L and Mr. N in my current life. I guess they are also tuning into the same Ms. Young-ae show to free themselves of stress. Just like me.