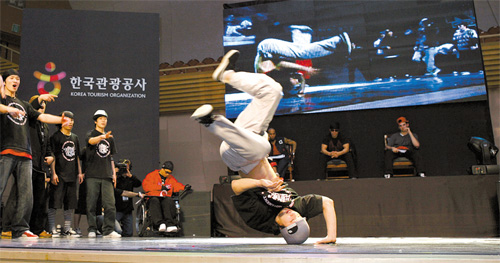 The Saengdonggam Crew spin into the qualifiers of “R-16 Korea Sparkling, Gyeonggi 2008.” Provided by the organizer

Feel the music. Express yourself. Don’t lose heart.
But you only have eight minutes to win over the crowd.
On a rainy evening last Saturday?500 break dancers, or B-boys and B-girls,?shaped some moves,?spun, twisted and?leapt around the stage at the Seongnam Arts Center, south of Seoul.
They were?out to prove they were the best break dancers in Korea, capable of taking on the world.
The winning team at Saturday’s competition would get?the opportunity to represent Korea at “R-16 Korea Sparkling, Gyeonggi 2008” in May, where a total of 16 B-boy troupes from 15 countries will compete.
“It’s all about feeling the music,” said M.C. GO, at the competition. “B-boy moves are highly energetic compared to other dance genres, and it’s important to be in sync with the music the whole time. Otherwise, no matter how good your technique is, you won’t impress the judges.”
M.C. GO used to be a B-boy, but a car accident two years ago wrecked his career and confined him to a wheelchair. Since then, he’s been emceeing competitions and passing on his knowledge and enthusiasm to younger dancers.
A total of 52 B-boy crews auditioned for the competition,?16 of whom made it to qualify.
In line with the B-boys’ spirit of freedom, participants don’t know what music will be played until they get on stage. Nor do they know in advance whom they will battle.
The rules are:?The teams?are given eight minutes in the quarterfinals, 10 minutes in the semifinals and 12 minutes in the final; the observers must stay behind the designated lines; and?no matter how fierce the battle gets, no touching is allowed.
The 800-seat auditorium last Saturday was packed with B-boy enthusiasts. They oohed and aahed at the tricks on display such as toprock, downrock, freeze and suicide.
After four hours of competition, the M.C. declared the winner: Gambler Crew secured a ticket to this year’s R-16 competition.
The 14-member troupe?started in 2002. They won the annual crew contest Battle of the Year in 2004 and have since won several other other international competitions. They were?the first non-American team to win the U.S. B-boy Hodown in 2006.
“It’s been four years since we competed at a local event. For the past few years, we’ve focused mainly on international competitions,” said Lee Jun-hak, a member of Gambler. “But we wanted to come back to our fans in Korea. So we prepared for about three months, practicing seven to eight hours a day at our studio.”
Gambler is a surprisingly well-structured enterprise. The members get regular health check-ups at Wooridul Spine Hospital, their sponsor, and their outfits are provided by another sponsor, Fila Korea. Gambler also runs an online shopping mall and a B-boy school.
“Not all B-boy teams operate like us. Some people say we are too commercial and that we’ve deviated from the essence of hip-hop. But we disagree,” said 24-year-old Lee. “We are running businesses on the side so we can get closer to the public. We are happiest?when we’re dancing, and when we win.”
Another team that will represent Korea at this year’s R-16?is Rivers Crew, which qualified?for this year’s competition after winning last year’s R-16.
“I think it takes the B-boy spirit?to become the best B-boy,” said Yu Hyeon, a member of Rivers Crew. “The B-Boy spirit is about freedom regardless of race, gender or age. I think it’s important to live with that spirit, whenever and wherever.”
Jo Yeong-jae, 28, the oldest member of the team, said, “It’s hard when we get hurt or injured. But I intend to remain for as long as possible. Age will not get in the way of my enthusiasm for this kind of dancing.” ?The Korea Tourism Organization and Gyeonggi Province, the organizers of this year’s R-16, want to develop the competition into a cultural attraction for tourists.
“B-boy is a part of Western culture, but time and time again, Korean B-boys have proven to be among the world’s best,” said Kim Seong-jin of the Korea Tourism Organization. “So we believe it could be developed into a tourist attraction like ‘Nanta’ or ‘Jump.’”
Nanta, also known as “Cookin’,” is a nonverbal performance that integrates Korean traditional drumming (samulnori), with a comical plot involving cooks.
Since its opening in 1997, Nanta has become one of Korea’s longest-running shows. It has its three exclusive theaters ― two in Seoul and one on Jeju island.
Jump is a comic martial arts spectacle that features the Korean martial arts taekwondo and taekgyeon, a much older style of fighting that originated in Korea, as well as other Asian martial arts.
“B-boy has enough potential to become a tourist draw,” Kim said. “We have been benchmarking world-renowned B-boy competitions to make our contest the best. R-16 is the only such competition spearheaded by a government.”
Kim said he hoped R-16 would achieve international recognition within two years. “We are certain it will be the next hallyu [Korean wave].”