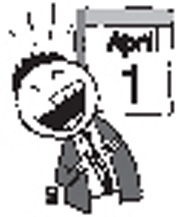 April Fool’s Day originated in France. Around 1564, King Charles IX replaced the Julian calendar with the Gregorian calendar used today. Thus, the new year started on Jan. 1, but many people still celebrated it on April 1. The people who favored the new calendar began to play pranks. They either sent empty wrapped boxes as New Year’s presents or fake invitations to New Year’s parties, making people come in vain. April Fool’s Day has since been established as a day to play pranks or tell a lie for laughs.
On a Web site (www.museumofhoaxes.com), we find the top 100 lies made on April Fool’s Day. The most infamous and absurd were selected.
At the top was a 1957 BBC TV news broadcast in Britain. The BBC announced that Swiss farmers were enjoying a bumper spaghetti crop and showed footage of Swiss peasants pulling strands of spaghetti from trees. When people asked for the cultivation method, the BBC replied, “Place a sprig of spaghetti in a tin of tomato sauce and hope for the best.”
Fourth place went to an ad by the U.S. fast food chain Taco Bell. In 1996, the Taco Bell Corporation announced it had bought the Liberty Bell, a symbol of U.S. independence, and was renaming it the Taco Liberty Bell. White House press secretary Mike McCurry responded to people wanting to verify the facts, including reports the Lincoln Memorial had also been sold. It was now to be known as the Ford Lincoln Mercury Memorial.
In 1977, a special report by the British newspaper called The Guardian ranked fifth. It ran a seven-page supplement on San Serriffe, a small republic located in the Indian Ocean, as the best holiday spot. Because of favorable response to this special issue, British tabloids are now in the habit of writing special stories on April Fool’s Day each year.
That may have even influenced Japan. In 1999, the Asahi Shimbun wrote in its politics page that “the Japanese government has decided to submit to Parliament a Big Bang law that would allow the nomination of foreigners to the cabinet as an emergency measure due to the lack of talented Japanese men.”
Korea’s media reported it in the morning news. But a notice that said: “Today is April Fool’s Day. There is one fabricated story,” slipped people’s attention.
There are constructive lies, too. The announcement made on April 1 by the search engine Google Korea that it will start an automated dialect translation service (www.google.co.kr/landing/saturi), is an example. The idea was to translate standard Korean into other dialects, even if April Fool’s Day is now over.

Fido and Princess cash in on Korea's Chuseok holiday festivities