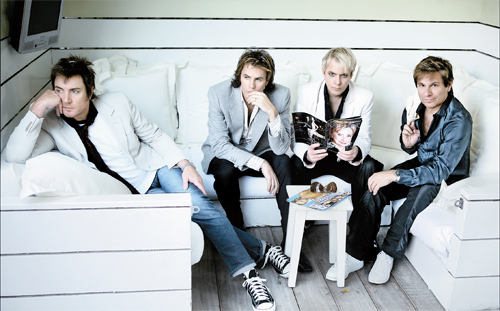 Duran Duran relive their 1980s heyday. Provided by the organizer

Eighties legends Duran Duran will perform once more in Korea after an absence of nearly two decades.
The British band will hold a concert at the Olympic Gymnastics Stadium, Olympic Park in Seoul on April 17 as part of a promotional world tour of the band’s newest album, “Red Carpet Massacre.”
The group, who first came to Seoul in 1989, consists of original members Nick Rhodes (keyboards), John Taylor (bass), Roger Taylor (drums) and Simon Le Bon (vocals).
Songs expected on the playlist will be classics such as “A View to a Kill,” “Ordinary World,” “Rio,” “Is There Something I Should Know?” and “Wild Boys,” as well as tracks from their latest release.
Since the band was formed 30 years ago, it has recorded 21 albums and 21 singles in the U.S. Billboard Hot 100 and 30 UK Singles Chart. The band has sold 85 million records worldwide.
Duran Duran’s stylish image added to its popularity, and its vivid music videos redefined the music industry in the 1980s.
Artists such as Limp Bizkit, Cold-play and Gwen Stefani cite Duran Duran as an influence.
The band is known to have been Princess Diana’s favorite band, with its music described as “a stroke of lightning captured on record” by U.S. pop culture magazine Nylon.
The band’s lineup has run through some changes in the past few years, but the original members reunited in 2001 and released new material on “Astronaut” in 2004.
Two years later, guitarist Andy Taylor quit the band once more, but the remaining members produced Red Carpet Massacre last November. It has been hailed as possibly the most creative music in the band’s career, and features collaborations with long-time Duran Duran fan Justin Timberlake and music producer Timbaland.
Duran Duran has been touring extensively for the past three years, notching up over 150 concerts a year.
Their audience is usually made up of fans wanting to relive the 1980s, as well as new fans.
The band’s “Red Carpet Massacre” world tour has taken them to Australia in March followed by concerts in Jakarta, Manila, Hong Kong and Tokyo and finally Seoul.