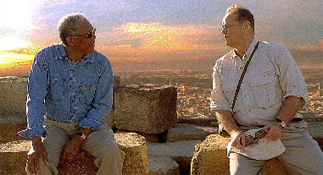 Morgan Freeman (left) and Jack Nicholson do their best to raise some laughs in “The Bucket List,” a flat comedy about terminal cancer. [Movie Web]

Edward Cole (Jack Nicholson) is a flamboyant, multimillionaire businessman who has made pots of money in the U.S. private health-care industry. Carter Chambers (Morgan Freeman) is a car mechanic and devoted family man who couldn’t afford to put himself through college.
The two 70-somethings meet in a hospital where they are both waiting biopsy results. The news is not encouraging: Both are told they have terminal cancers. Chambers, confronted with mortality, scribbles down a “bucket list,” a list of to-dos before he, you know, kicks the bucket. Spurred on by Cole, they ignore medical advice and pledge to complete their wish list before they croak.
Their adventure takes them to Africa for a safari, Egypt for the pyramids, to high altitudes for skydiving and a race track for some serious motoring.
And there was I thinking cancer was an illness.
The basic setup for this buddy caper looks great on paper. Cole (devil-may-care, rich, lone wolf, scoundrel, aging lothario) and Chambers (loyal, philosophical, gregarious, literate) provide neat contrasts with each other, and whenever terminal cancer is knocking at the door you can expect plenty of opportunities for putting audiences through an emotional wringer.
So why is this movie such a dud? Well, it’s not rocket science: The script is flat and leaves Nicholson and Freeman floundering around the set with characters that lack integrity in a plot that lacks plausibility.
First off, audiences will have a tough job believing Cole built a lucrative business. He does not come across as either shrewd or creative enough to be an entrepreneur. Chambers, meanwhile, is clearly a gifted, well-read caring man who, we are led to believe, could not get a better paying job and spent 45 years with his head under the bonnet of cars he could never afford.
I find this hard to swallow.
Since neither character is at all credible, the gags that spin off the conflict between them feel leaden and forced, despite the two leads’ best efforts.
Nicholson, though, is a fine comic actor. His role in “About Schmidt” (2002) is a master class in understatement and pathos. But that movie’s funny because Schmidt seems authentic: Schmidt retires, his wife dies and he struggles to find meaning in life after years working in a bone-grindingly dull profession: insurance. That’s very believable; The Bucket List and Cole are not.
That said, I laughed once, when Cole says to his assistant: “Here’s something to remember when you’re older, Thomas ― never pass up a bathroom, never waste a hard-on, and never trust a fart.” But his quip only serves to remind us that growing old is often an embarrassing, undignified experience that most of us will experience, sooner than we would like. It’s not great material for hijinks.
Meanwhile, Freeman is left with the unenviable job of providing some kind of moral center to the movie. But his voiceover drips with such hokey sentimentality and his character is so kind and considerate that there is little chance of humor brewing. He’s nice, but not a barrel of laughs.
In the end this formulaic film proves that no matter how talented the cast, without a strong script you might as well kick away the bucket and swing.