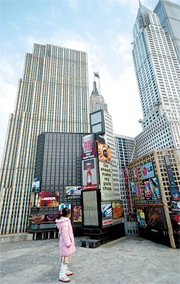 A visitor looks at Times Square at Aiins World. By Lee Ho-Jeong

They may not be as sophisticated as Universal Studios, as entertaining as Disneyland or as glamorous as the studios of major movie producers in Hollywood.
Yet Fantastic Studio and Aiins World, located back-to-back in Bucheon, Gyeonggi, are perfect locations for people who want to lose themselves in a world of fantasy and fiction.
Bucheon, located southwest of Seoul near Incheon and famous for its film festival every July, is Korea’s version of Neverland.
Starting the trip at Fantastic Studio, a working film studio that is open to the public, you pass through a black tunnel that opens onto a vast film set.
The set is a replica of the streets of old Seoul, and you will be transported back to the Korea before the economic success in the past few decades.
Fantastic Studio has seen better days, to be honest. The paint on the walls of the studio is peeling, the dusty museums are left unattended and the stores look as though they are ready to shut down.
An outdoor wedding garden hidden behind some of the stores looks abandoned and weather-beaten, and the overall feel is of a ghost town.
Despite these conditions, the studio was crowded one recent afternoon with amateur photographers equipped with expensive-looking lenses shooting models who were posing in front of a replica of Hwashin Department Store, one of Korea’s first modern shopping centers.
Other visitors came with their families, friends and dates.
Of course, the buildings are smaller and most of the structures are wooden, but the historic sites are lovingly re-created.
Expect to see Cheonggye Stream from the old days, before it was concreted after the Korean War (1950-1953); the old Jongno police station; and Boshingak, the bell rung every year on New Year’s Eve.
Visitors like to linger at Umigwan, the movie theater where the Korean gangster Kim Doo-hwan knocked out fellow gangster Gu Ma-jeok.
This famous mano a mano punch-up made Kim one of the most influential figures during the Japanese colonial era.
The studio has been used as the set for many recent Korean films and television programs.
The very first television show to be filmed here was “Rustic Period,” the story of Korea’s tough guys including Kim Doo-hwan.
Since then films such as “Taegukgi,” “Rikidosan,” “Blue Swallow” and “Raging Years” were filmed here.
Television shows set in the early days of modern Korea including “Fashion 70s,” “Seoul 1945,” “Heroic Age” and “Sisters’ Sea” were also shot here.
In front of the department store, a tram that once roamed the streets of Jongno stands quietly.
Although the brochure says visitors can ride the vehicle, it is currently out of service and the doors are padlocked.
But there’s nothing to stop you posing in front of the tram for pictures.
Other shops have closed down, including restaurants that used to sell traditional Korean food dating back to times before the economic boom in the early 1980s.
Other offerings promoted in the brochure but not actually taking place include a street magic show, a film props exhibition and a balloon-carrying clown.
According to Fantastic Studio, the contracts on the shops and the trolley have expired, and there are no immediate plans for the shops or the trolley.
However, with a major dance festival planned for this October, Fantastic Studio says a major renovation is in the pipeline.
Hopefully, the current deteriorating condition of what could be a wonderful tourist attraction may improve in the near future.
Five minutes away by foot is Aiins World, which offers the cheapest way of seeing some of the world’s most sites.
Aiins World is organized into 12 different zones, including landmarks from England, France, Europe, Russia, Africa, Rhodes Island and Atlantis, the mythical island in the middle of the Atlantic Ocean.
Passing through the food center, the first building that comes into view is a miniature replica of Tower Bridge in London, next to which is Big Ben, Westminster Abbey, the Houses of Westminster and Buckingham Palace.
Interestingly, the west end of the Buckingham Palace replica opens up automatically and behind a plastic window, visitors can see the inside of a room with miniature figures depicting Queen Elizabeth and one of her sons.
Just a few steps away is the Eiffel Tower, the Louvre Museum with Napoleon galloping ahead of a campaigning French army, Paris Opera House, the Arc de Triomphe and the Palace of Versailles.
There is another miniature world on Jeju Island, but compared to the one in Bucheon, it is less sophisticated.

From top to bottom: The Petronas Tower and New York’s World Trade Center at Aiins World; couples walking along a replica of the streets of old Seoul at Fantastic Studio; a visitor enters one of the wooden building used as a set for various films at the studio.

Aiins World is fascinating. The model makers have paid an enormous amount of attention to the tiniest of details.
Gaudi’s masterpiece, the Sagrada Familia Church is a case in point.
Although it is just a miniature replica and it may not be as breathtaking as the real structure, seeing it was emotionally overwhelming and makes you want to book a flight to Barcelona to see the real thing.
Petra in Jordan, hidden behind a red wall, was so exciting that you feel as if you are on the set of “Indiana Jones: The Last Crusade.”
Some buildings move, such as Atlantis, which submerges with thunderous audio effects.
The island stays underwater for two minutes before it pops right back up.
One of the most impressive areas is the North America zone where there are numerous skyscrapers, including the Rockefeller Center that towers above even the adults.
At the top of the Empire State building is a small-sized King Kong figure hanging onto a pole, just like in the original film starring Fay Wray.
The World Trade Center stands tall among the other skyscrapers. Just behind the heart of New York City is another tall building, the Petronas Tower in Malaysia.
The last zone is Korea where you can see Gyeongbok Palace and Hwangyong Temple, which was built near Gyeongju in the seventh century but destroyed during the Mongolian invasions of the 13th century.
This nine-story wooden pagoda was supposedly 80 meters (262.5 feet) tall.
Korea is the only zone that hosts a re-enactment of a historical moment. Several battleships re-enact on a pond the Battle of Hansan Island, which took place in the 16th century during a major Japanese invasion. The Korean Navy under the command of General Yi Sun-shin beat back the Japanese invaders using the famous turtle ships.
The re-enactment of the naval battle, complete with smoke effects, was entertaining, but it looked odd with King Kong in the background. The whole scene looked surreal.
The trip was not the most exciting day of my life, but by late afternoon, when it was time to head home, my childhood imagination was playing in the fictional settings of the make-believe world.
Adults who have yet to grow up will enjoy both places, as will the kids.