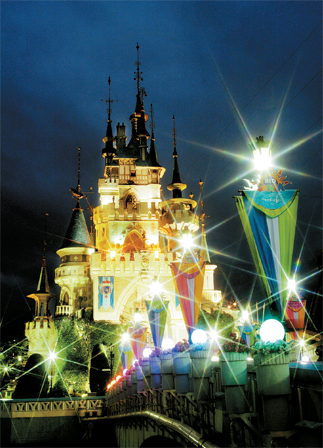 The southern part of Seoul is known as a fancy, up-market part of town where you can go clubbing and drink until the early hours in a pojangmacha, a drinking tent.
But there is much more to this neighborhood late at night, and you need not spend a lot of money. You can go on a roller coaster, listen to classical music, shop, get a haircut and dine under moonlight in southern Seoul for just 30,000 won ($29.68). It sounds like mission impossible, but if you have inside local knowledge and a bit imagination, you can have a thrifty night out.
This is our guide to a 7 p.m. to 7 a.m. night out south of the Han River.
Screaming start to the evening’s frolics
Let’s begin the 12-hour odyssey south of the Han River with a screaming ride on the roller-coaster at the Lotte World theme park.
Most visitors prefer a daytime visit, but the evening is a viable alternative.
“There’s no way we skip class for a theme park,” said Park Hye-jin, an evening visitor with her friend Park Min-woo, both 20.
They said the tickets are cheaper and comparatively less people are lining up for rides.
“We can only visit at this time,” Park said.
Special discounts are offered for visitors entering after 7 p.m. Last year, the theme park came out with the Moonlight Pass, a package that includes the admission and three big rides for 13,000 won ($12.68). A daytime pass that includes the use of all facilities excluding game attractions costs 35,000 won.
“The theme park attracts 5 million visitors a year,” said Park In-sun, the PR manager of Lotte World.
Visitors after 7 p.m. are mostly foreign tourists, according to Park. Tour packages end the trip with an evening walk around the theme park. Go to Jamsil subway station, line No. 2, exit 4. Lotte World is open from 9:30 a.m. to 11 p.m. For more details, call (02) 411-2000 or visit www.lotteworld.com. 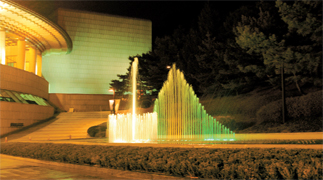 The shapely musical water fountain
If the roller-coaster rides leaves you in need of rest and relaxation, the World Music Fountain outside the Seoul Arts Center in Seocho-dong is worth a visit.
The fountain spurts forth water in time to music, forming a variety of shapes, such as a gat (a traditional cylindrical hat), an orchid, a crane and fog.
Kim Hee-joong and Shin Dong-won, two high school students, were listening to pre-recorded music by the Vienna Symphony Orchestra and Sarah Brightman at the water fountain.
They often come here a long evening poring over their books.
“We come to get rid of stress,” said Shin, 17.
Shim Sung-shine, 37, a mother of two, has been a keen water fountain fan since it opened in 2002. “Children don’t hear much classical music today, and mainly get exposed to pop and rock,” Shim said. “Stage performances may be too long and tiresome for youngsters.”
The setting is perfect, especially during the warmer months. You can sit outside with Mount Umyeon behind you and just zone out.
Go to Nambu Bus Terminal subway station, line No. 3, exit 5. Shows are at from noon to 1 p.m., 3:30 to 4:30 p.m., 6:30 to 8 and 9 to 10:30 p.m. No shows Mondays or when it rains. For more details, call (02) 580-1300 or visit www.sac.or.kr 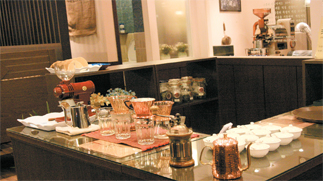 Coffee and cookies fit for a king
Don’t let go of the musical appreciation acquired at the Seoul Arts Center. You can chitchat about the fountain at “The Beauty of King Gojong,” a coffee shop near Nambu Bus Terminal.
Despite the late hour, the coffee shop is packed. Cho Joon-keun, 25, a student working there, says the joint is at its busiest after the water fountain show.
There are other nearby coffee shops, like Starbucks or The Coffee Bean, but The Beauty of King Gojong stands out, Cho says.
“Coffee drinking today is polarized between going to a franchise or to a small-scale cafe,” Cho said. “Franchise coffee shops seem like instant food compared to cafes that specialize in hand-dripped coffee.”
The shop opened in 2006 and offers a fresh-baked almond cookie when you order a drink.
The coffee beans are from South America, Africa and India, and the coffee shop is named after King Gojong (1852-1919), Korea’s last king.
He is thought to have become a coffee fan after he fled to the Russian Embassy in 1896 after his wife was assassinated by the Japanese.
One theory is that he was introduced to coffee by Antoinette Sontag, who founded the Sontag Hotel in Jeong-dong, central Seoul.
At that time, coffee was a luxury, and only members of the royal family and high-ranking officials could afford it.
In the 1930s and 1940s, during Japanese’s colonial rule, coffee came into Korea from Japan and spread throughout the Myeong-dong and Sogong-dong areas in central Seoul.
Coffee became more widespread during the Korean War when there was an influx of U.S. soldiers who brought instant coffee with them.
To get to the coffee shop, go to Nambu Bus Terminal subway station, line No. 3, exit 5.
The store is open from 9 a.m. to midnight. Call (02) 598-1523 for more details. 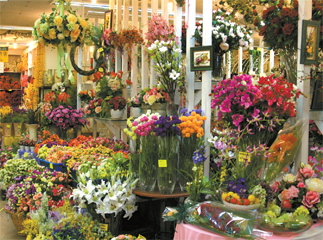 Late-night movies offer latest releases at discount
With some caffeine in the body, it’s time for a latenight movie.
Most people think that they can only get a discount at the early morning screenings, but you can also get deals on late-night shows.
The MMC Megaplex Cinema (02-2268-0262) in Dongdaemun, central Seoul, is currently the only 24-hour theatre complex in Seoul. There are some drive-ins, too.
In southern Seoul, though, there aren’t any theaters that run films around the clock, but they do run late shows after midnight.
There’s a cinema called Cinus G at the Central City shopping mall in the Express Bus Terminal Station. There’s a Megabox in the COEX building in Samseong-dong.
To get to Central City, go to Nambu Bus Terminal, line No. 3, exit 5. Central City is open from 8 a.m. to after midnight.
For more details, call (02) 1544-0070. 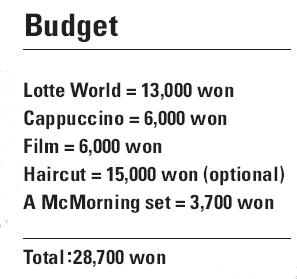 Flowers that bloom late
If the film you watched was a flop, visit the Gangnam Flower Market next to Central City to cheer yourself up.
Natural flowers are on the third and fourth floors whereas plastic and ornamental flowers are on the fifth and sixth floors.
The market is at its busiest in the early hours of the morning, when wholesalers buy up large stocks of flowers for sale, but it’s not only the wholesalers. Though it’s past midnight, Kim Eun-shil, was buying bunches of roses for her friend’s wedding the next day. She said it was the right time to buy fresh flowers at a cheap price.
To get to the market, go to Nambu Bus Terminal, line No. 3, exit 5. It’s open from 1 a.m. to 1 p.m.

It’s never too late for a trim
Nonhyeon-dong is bright even after the city is asleep.
Most shopping areas and restaurants are open 24 hours here. Of course, getting a haircut here is optional. “Hair Party 24 Hours” in Nonhyeon-dong is, as you might guess, a 24-hour beauty salon.
There are many places to get a haircut around the clock around Ewha Womans University in northern Seoul, but in southern Seoul the beauty salons that operate 24 hours are mostly in Nonhyeon-dong area. There are 30 stylists in this salon and they rotate different work shifts — from 9 a.m. to 10 p.m. and vice versa.
Refuel on Big Macs 24 hours a day

Stroll along the streets of Nonhyeon-dong in southern Seoul at this time and you’ll see McDonald’s is packed with office workers. That’s why McDonald’s Korea has opened 70 percent of its branches as a 24-hour operation.
“People’s lifestyles have changed,” said Hye Ji-yeon, the PR manager of McDonald’s Korea. “Increasing numbers of people stroll outside at night. They naturally look for a safe and descent place where they can spend time.”
Jeon Mi-ae, a 28-year-old office worker in Nonhyeon-dong, was having a light snack at this time.
“When there were less 24-hour stores like McDonald’s or other Korean restaurants that sell beef soups, I ate my snacks at convenience stores. I mostly ate instant cup noodles.”
To get to this branch, go to Gangnam-gu Office Station, line No. 7, exit 4 .
For more information, call (02) 3443-9816.