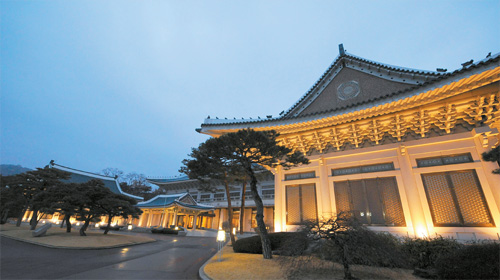 They may not be part of the cabinet, but presidential physicians are just as important, because of their closeness to the president, and his importance to national security.
President Lee Myung-bak’s current physician is Dr. Choi Yun-shik, who specializes in internal medicine and is also a professor at the prestigious Seoul National University.
It was the late former President Park Jung Hee who introduced a system for appointing physicians for the president in 1963.
Dr. Choi is also an in-law of President Lee — his son is married to President Lee’s second daughter. Choi plans to conduct regular weekly checkups on Lee and do a detailed analysis about twice a year.
“The president’s stamina and health is as good as any young guy, as he plays tennis every week, but I have to consider his workload and his age,” Choi said.
The first doctor to serve as a presidential physician was Dr. Ji Hong-chang, who operated a private practice from 1963 to 1970. Professor Min Heon-gi from Seoul National University succeeded Dr. Ji and stayed on the job for nine years.
Unlike the current political system, Park Chung Hee had a dictatorship that continued until his assassination in 1979.
Since the first appointments of the physicians, it became an unspoken rule that professors from the nation’s most revered colleges would get the honorary job of guarding the president’s health.
Among the 12 presidential physicians, only four were not from Seoul National University.
Dr. Koh Chang-soon served as personal physician during the entire reign of former president Kim Young-sam from 1993 to 1998. Koh said that appointed doctors have to stay within a half-hour distance at all times. 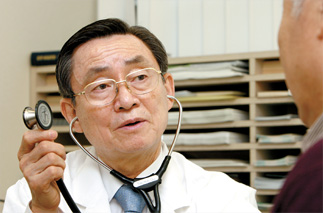 “Seoul National University’s hospital is the nearest general hospital to the Blue House, and doctors have to be ready at all times for any emergency,” Koh said.
He remembers former President Kim as a very healthy person needing little treatment.
“During his term, except for the occasional cold, he was never sick,” said the doctor, remembering the president joking with reporters that he was the physician’s doctor.
The job is mostly an honorary assignment with little pay except for special allowances that don’t amount to much.
Under protocol, the position is equal to the rank of a deputy minister.
On trips abroad, the doctor is at times included in the official entourage. For actual treatment of the president and his family, the doctor uses a small branch of Seoul National University’s hospital that is established at the Defense Security Command located near the Blue House. The command’s tight security provides the required privacy and secrecy that come with treating the president.
It is customary for doctors to accompany the president on his vacations as well.
Dr. Choi Kyoo-wan, who attended to former President Roh Tae-woo from 1988 to 1992, said that during vacation he often helped the president to pass time.
“We played golf together and sometimes I refereed his tennis games,” Choi said.
He almost served as the physician for former president Chun Doo Hwan, who was Roh’s predecessor. Dr. Min Byeong-seok was selected instead selected of Dr. Choi, a development that later turned out to be a life saver for Dr. Choi.
Dr. Min died in 1983 during a bomb attack in Burma planned by North Korean agents who had targeted President Chun, who was visiting the country. But Chun escaped unharmed. Nevertheless, the terror attack resulted in the death of several of Chun’s cabinet members, including Dr. Choi.
The biggest power that the personal physician has is the right to recommend medical advisors to a special committee of 20 to 30 medical experts.
The committee serves as a standby organization that consults on medical issues, such as whether an operation on the president is the proper way to deal with a certain illness. Doctors say that at times disputes occur over proposed cures, because any treatment of the president is directly linked to national security.
For instance, committee members had a heated debate in 1990 when former President Kim Young-sam was scheduled to receive an endoscopic examination under anesthesia.
The issue at hand was that the method was still relatively new, prompting some advisors to argue that it was too dangerous. In the end, the exam was not conducted in the conventional way.
Among former presidents, Kim Dae-jung suffered the most from ailments, doctors say. 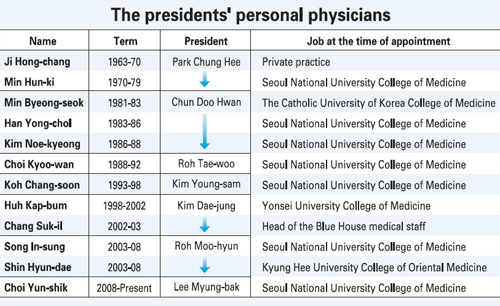 Toward the end of his term, physicians were on constant alert as Kim frequently had to be hospitalized. He suffered from diabetes, Bright’s disease and hip problems.
Kim’s diabetes caused him to chose Dr. Huh Kap-bum as his personal physician. Huh is considered the authority on diabetes treatment and was a doctor at Yonsei University hospital.
A doctor speaking on condition of anonymity said that competition to be included on the presidential committee is intense, because the job brings prestige and puts one’s resume on a different level. That is why alumni from Korea University, the alma mater of President Lee, tried to break the traditional appointment of Seoul National University doctors, according to industry officials.
All doctors are trained in Western medicine. The only time oriental doctors were included in the inner circle of physicians was during former President Roh Moo-hyun’s term.

Roh did this because he was suffering from chronic disc problems and he wanted to use acupuncture practiced by oriental doctors. Nevertheless, President Lee Myung-bak decided to abolish the position, which is said to have caused disappointment among oriental doctors.
While appointed personal physicians are given the duty of checking regularly on the president’s overall health, guarding the president’s health around-the-clock on an everyday basis are military doctors and nurses of the Presidential Security Service.
An active colonel by rank, the head of the exclusive hospital at the Defense Security Command is usually considered a strong candidate to become the head of the Medical Command, the highest position a medical officer can reach, after a successful tour at the Blue House.
Rarely are physicians put into situations where political maneuvering is required, unlike other cabinet members, but their closeness to the country’s leader sometimes does put them into situations where their opinions count.
In 1999, Cha Heung-bong, health minister at the time, asked for a meeting with Chang Suk-il, the head of the medical staff of the Blue House and Huh Kap-bum, the personal physician of President Kim Dae-jung.
At the time, the political world was divided on whether to support President Kim’s bid for the separation of the pharmaceutical industry from the medical practice. At the time, the move was widely opposed by practicing physicians. “I think the minister was concerned that the two of us would ask the president to abandon his bid,” Dr. Huh said.