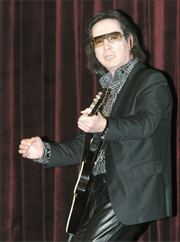 He’s been out of the music scene for two years, but that hardly seems to make a difference after his 32 long years in the industry.
Now, singer Yun Soo-il, 53, is back, a return he signaled with a promotional conference held at Seoul’s 63 Building on March 28.
This time, Yun had more to offer than just songs. The show opened with a video and a monologue.
“When I came into this world, the first thing I saw was my mother, crying,” Yun said. “My father was not there to greet me. As years went by, I realized there was another me growing within myself. He was full of despair, sorrow and rage.”
Yun has also published a book of essays called “The Road,” about his childhood years growing up as a biracial child in the post-Korean War (1950-53). Yun was born in 1955 to a Korean mother and a U.S. Air Force pilot.
“Now that I’m in my 50s, I’ve started to look back at my life,” Yun said. “Back in the day, Koreans viewed biracial children as a disgrace to their history. It was not easy growing up with such a prejudice. I wanted to share the story of that time.”
At the concert, Yun performed classic hits like “Apartment,” “Ecstatic Proposal” and his 1977 debut single, “I Will Not Love,” as well as songs from his latest album, “Terminal.”
About 300 fans attended Yun’s comeback show, along with many of Yun’s celebrity friends. Singer Park Sang-meen and M.C. Lee Taek-rim were in the audience.
“Since the music market is fast-changing, you have to work extra hard,” Yun said. “While I was on a national tour for the past two years, I wrote some songs. That’s how I made this album.”
Upon Yun’s late-’70s debut, he quickly became the king of Korean pop. His handsome image drew a huge female fan base.
His ’80s trademark of sunglasses and leather pants didn’t hurt, either.
Yun’s ability to compose and perform songs of various music genres like rock and trot, an old style of Korean pop, helped him remain at the top of the music world for many years. During his 32-year-long career, Yun released a total of 22 albums.
“I always strive to find out what music fans today like. I feel like I’m taking the bar exam for the 22nd time,” Yun said with a laugh. “My music is a mix of Korea’s home-grown sound and the strong, powerful beat of modern pop. Today’s music industry faces a lot of challenges. But just like we revived our movie industry, I hope to bring life to our pop music.”