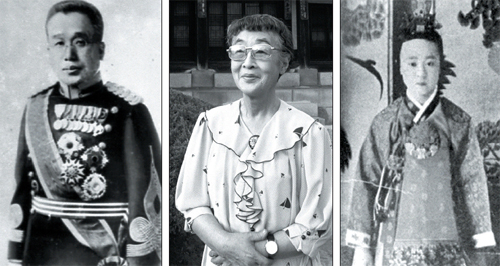 From left: Prince Lee Eun; his wife Lee Bang-ja; and Princess Deokhye all lived the remaining days of their lives at Nakseonjae. [JoongAng Ilbo]

“Nakseonjae is secluded from the other palace buildings, but you can sense the presence of its former occupants,” wrote Hong Soon-min in “The Story of our Palaces.”
Queen Yun, wife of King Sunjong, the last Joseon king, moved to Nakseonjae in 1926 after her husband died. Yun is known for trying to protect the Joseon legacy during the turbulent Japanese occupation of the Korean Peninsula and the Korean War (1950-1953). However, she was forced to flee Nakseonjae during the war, and she didn’t return until 1960. She died there in 1966.
Prince Lee Eun, Sunjong’s half-brother, was taken to Japan in 1907 when he was 10 and married to Princess Masako (Lee Bang-ja) in 1920. Japan forced members of the Korean royal family to get educated in Japan and get married to a Japanese spouse.
The Korean government didn’t allow Lee back into Korea until 1963, and when he finally settled at Nakseonjae with his family, he was so sick he spent the next seven years in the hospital. He died in 1970, but spent his last day at Nakseonjae with his wife.
Lee Gu, the son of Lee Eun, and his American wife, Julia Mullock, lived at Nakseonjae from 1963. The couple separated in 1977 and Lee moved back Japan. They divorced in 1982 under pressure from the royal family, citing the couple’s failure to produce an heir.
Princess Deokhye was sent to Japan in 1925 when she was 13 and forced to marry a Japanese aristocrat in 1930. She eventually found peace when she moved back to Nakseonjae in 1962.
Her years in Japan, though, proved too distressing and she never fully recovered from a nervous breakdown she suffered as a result of her years in exile.
Despite its long history as a residence, Nakseonjae is unlikely to be used as an official home again, said Yoon Suk of the Changdeok Palace information office.
Instead, palace staff aim to attract more tourists and let them know about the romance and tragedy that took place here a century ago.