The changing face of feminism

The changing face of feminism 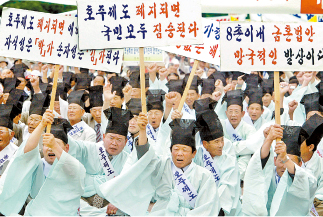 Confucian scholars take to the streets to support hojuje, the law that used to allow only men to be the head of a household.

When the feminist quarterly IF ceased publication in 2006 after nine years in the magazine business, it was the end of an era for Um Eulsoon, one of the magazine’s founders.
IF took off in Korea in 1997 when the term feminism had just emerged. At the time a number of plays and films sprang up featuring women who juggled work and marriage. In schools, women’s studies became a bona fide university major and there was increased talk about abolishing hojuje, the family registry system that allowed only men to be the head of a household. (Hojuje was finally abolished last year.)
The magazine was emblematic because for the first time in popular media, a publication challenged women’s consciousness. Instead of advocating equal opportunities at work or providing shelters for victims of domestic violence, IF took to the streets calling for boycotts of male writers for perpetuating patriarchal values in their work, and it encouraged women to use both of their parents’ last names and take pride in their mothers’ lineage. 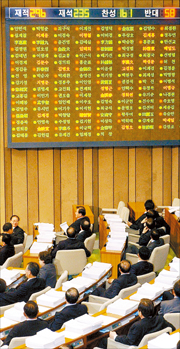 The National Assembly passes a bill in 2005 that abolishes hojuje.

Ten years later, Korean society appears to be a different planet, but whether or not men and women are truly equal is still matter of debate.
Mainstream society believes men and women have achieved parity. Newspaper reports show that over half the number of medical students last year at Seoul National University, which demands the highest scores among Korean colleges on the university entrance examination, were women, while 40 percent of the candidates who passed the bar exams were also women.
Media buzzwords like “alpha girls” and “gold miss,” describing single women with successful careers, celebrate the generation of independent young women today.
Um finds this phenomenon unsettling. “The irony is that in Korea we have ‘alpha girls,’ but we still don’t have any ‘alpha women’,” she says.
Um is the director of IF, which organizes feminist events like Anti-Miss Korea, a festival that prompted local stations to drop coverage of the national beauty pageant.
“That’s a sad reality faced by professional Korean women today. No matter how smart or successful you are, everything starts to fall apart when you get married and have a child,” she says.
The dilemma over issues like child care hasn’t spared socially conscious women like Um, who says she belongs to the country’s “1.5 generation of the women’s movement.” She is referring to women who lived through the era of the labor movement in the ’60s and the subsequent period that focused on gender inequality and women’s education.
In the ’70s, Um left Korea with her husband to attend graduate school in the United States. When she got pregnant, she quit her studies and became a full-time mom.
“It looks like we’ve changed a lot,” she says. “But the fundamental system stays the same. A child is still a mother’s responsibility.”
Recently local women’s groups went on alert when the new government, led by noted conservative President Lee Myung-bak, cut funding to the Ministry of Gender Equality by 95 percent in February. 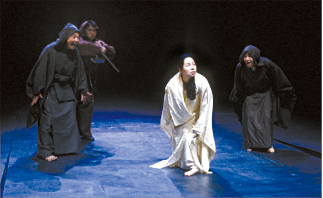 A scene from “Lady Macbeth,” which re-interprets Shakespeare’s play from a woman’s perspective.

The new administration, which took power after 10 years of liberal rule, entrusted family and child care to the Ministry of Health and Welfare. These areas used to be covered under the Gender Ministry.
Women’s groups have seen this decision as a move to separate child care from women’s policies, and instead invest taxpayers’ money on Lee’s pet projects, such as the proposed construction of a cross-country canal.
There is also concern that such a move will weaken major advances in gender laws that the previous administrations supported, such as the Anti-Prostitution Act and ending hojuje.
Meanwhile, civic groups are criticizing women’s policies for focusing too much on welfare and family at the expense of human rights issues.
“We’ve seen too many cases where conflicts involving migrant women in their new homes in Korea were handled from a family perspective instead of protecting the rights of an individual minority,” says an aide at the Migrant Women’s Human Rights Center.
Significantly, feminist scholars say sex discrimination in Korea follows a popular model of gender mainstreaming, an approach aimed at bringing women into mainstream society. The system, they explain, weakens gender policies, isolating people to society’s fringe.
The situation has got to a point where some Korean women in power now admit that gender factors are a career asset to make progress in mainstream society
When Cho Yun-seon, a Grand National Party spokeswoman, was asked in a recent interview about the rise of “attractive females” as a mouthpiece in Korean politics, she said women have more advantages than men in the role of a spokesperson, because they could “arouse interest,” helping parties to communicate their messages better.
Cho Han Haejoang, a leading feminist theorist and a professor of cultural anthropology at Yonsei University, observes that the country needs major “re-inspection” of feminism if it wants to see progress.
In 1999, she set up an alternative school for local school dropouts, called the Haja Center. Haja, which means “Let’s do it” in Korean, was unique in Korea at that time. It helped “teenage delinquents” develop creative skills in film, art and music. In 2001, the Seoul city government designated the school as a youth job training center.
Cho Han’s objective in founding the school was clear: Society was no longer isolating just women, but men, young people and anyone else who was not part of the mainstream.
Ten years ago, the idea of feminism was so new in Korean universities that Cho Han’s class was focused on introducing gender theory. A majority of students from her class then were women. 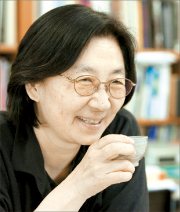 A decade later, social conditions of women and men in Korea are much more layered, and the divide between men and women is less clear-cut.
Last semester, her class on feminism and cultural theory was renamed “Sustainable Life and the Future of Humanity.” The curriculum looked at functions of eco-feminism in a modern society overrun by the market economy. More than half of her students in the class now are men.
“Students nowadays are so much more introspective about their social realities,” Cho Han says. “They know how hard it is to survive in this competitive society. Ten years ago, I thought the male students seriously debased the quality of class discussion, because their arguments were often out of the blue. Now, they are extremely insightful, because they’ve become more fragile, and they know what it’s like to be isolated from mainstream society.”
More scholars, artists and activists engaged in the women’s movement are developing different strategies or redefining feminism to adjust to the changing times in Korea.
“When we first began, we set the strict principle of a feminist film on works of art created by a woman director,” says Lee Hye-kyung, the commissioner of International Women’s Film Festival in Seoul, which celebrates its 10th year this year. “Now we try to be as open and flexible as possible about the gender boundary. That’s a big change for us.”
In the recent play “Lady Macbeth,” based on the fifth act of Shakespeare’s play “Macbeth,” playwright Han Tae-suk depicts the female psyche of a delirious heroine through organic props on stage like water and clay, which stresses sensibilities particular to women.

The play, which was severely criticized for “distorting” the original text when it was first staged in 1999, has sold out since it re-opened this year.
Many feminists today agree that an effort to enhance women’s status needs an entirely different set of communication strategies.
In 2000, a feminist artists’ group “Beautiful Voluminous Womb” held a performance, in which they occupied a Confucian shrine, and hung the pink skirts of women’s hanbok, the traditional Korean dress, around the religious compound. It was paying tribute to the history of women’s oppression.
The group broke up shortly after the performance.
Je Mi-ran, an artist from the group, left Korea to study feminist art in France. Back home, she is a now a feminist art therapist. At her workshops, women explore their five senses as a means of bringing balance to their bodies. Her work now marks a significant shift away from her militant artwork as an activist eight years go.
“Looking back, the performance was very particular to the social mood of Korea at that time,” Je says. “It was not us, but history that led to the production of the work. But the performance would not have the same resonance if we were to repeat it today.”