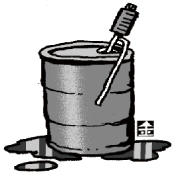 Community centers for the aged in Chung-cheong Province are currently undergoing much-needed renovation. The work of replacing oil-fired boilers with electric boilers is currently in full swing. The elderly who use the centers will certainly find it more convenient to use the new boilers, since these leave no gas or sediments dangerous to human health. However, there is a far more important reason for the replacement. The old boilers using kerosene usually cost 530,000 won ($544) per month to heat a 99-square-meter-room, compared to the 250,000 won per month (at the night-use rate) it would cost for an electric boiler. Even though the cost would increase 18 percent even with the application of the night-use rate, it is still dirt-cheap compared to using kerosene. The main reason is that the government has set a price cap on electricity charges, leaving oil prices alone.
There are a myriad of historical examples of how good intentions can lead to catastrophe. England lived in comfort after driving Napoleon away. It kept out usury, considered ungentlemanly behavior. The annual interest rate was fixed at 5 percent, as specified by law in 1816. At that time, Latin American countries craved for development funds. England had abundant funds, since it held 25 percent of the world as its colony.
A lot of people resorted to an expedient. After Latin American countries issued a bond at the highest rate of interest in France, they brought in money to England. The bond brokers made huge amounts of money. They brought in lawmakers and ministers who made high-rate funds illegal as managers, with a view to avoid government control. However, England made a mistake, due to its own ignorance, as it had no idea about the continent’s circumstances. When Mexico declared its failure to pay its debts in 1820, it caused a sudden economic depression. Many private investors in England were driven to the brink of ruin.
Recently, the government designated 52 essential items under special management. The government’s good intention that spares no effort to make civilian lives stable leaves nothing to be desired. However, I am afraid of the counter effects.
The global credit rating company Moody’s issued a criticism: “The economic task force team of the new government is preventing people from finding an adequate solution to stabilizing the price index.”
We need to pay more attention to this criticism. If Korea wants to decrease prices, there is no other way except to just wait until the international oil price drops, Moody’s observed.