Presents fit for a president

Presents fit for a president 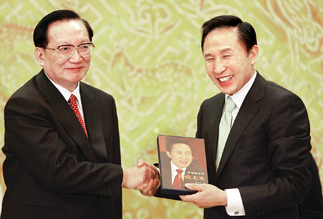 Gift-giving is one of the most universal ways of expressing one’s gratitude, commitment or pleasure, and exchanging gifts on state visits has long been considered an official part of protocol.
However, gifts exchanged between heads of state are supposed to convey more than “It’s a pleasure to meet you.” They are expected to embody the history and tradition of their nations as well as the values and spirit of their people.
At President Lee Myung-bak’s inauguration in February, Uzbek President Islam Karimov received white porcelain incised with Korean letters.
Lee presented U.S. Secretary of State Condoleezza Rice with a hand-decorated jewelry box, symbolizing nobility and prosperity.
Kazakhstan’s Vice Prime Minister Umirzak Shukeev took home a traditional Korean flute, called taepyeongso, which was the motif of the ceremony that represents hope for world peace.
The most frequently given gift since 2003 has been ceramics, according to data from the Ministry of Foreign Affairs and Trade. Ceramics accounts for 28 percent of all state gifts.
Cloisonné ware, a decorative metal item produced using an ancient enameling technique, was the second most chosen item, with 13 percent.
Other popular presidential gifts are ornamental replicas of a turtle ship, a historic Korean warship.
“We normally start preparing the gifts as soon as we have confirmed the date of the event and the list of attendees,” said Ra Yoo-jin, an official at the Protocol Planning and Coordination Division of the Ministry of Foreign Affairs and Trade.
As with birthdays and other special occasions, choosing the right gift is an art form if it is done properly.
“When selecting gifts, the most important thing is to find items that best represent our culture and heritage. But we also strive to select gifts that have a personal touch to them.”
In order to find that perfect present, protocol officials conduct a thorough review of the various options, taking into consideration history, era, manufacturing techniques and symbolic value. 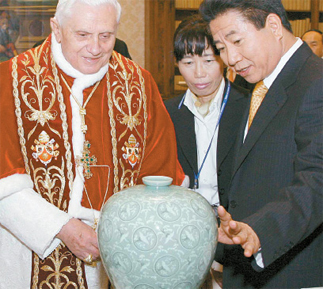 They also need to study the recipients, perusing their profiles, autobiographies and relevant news reports.
When former President Roh Moo-hyun visited Costa Rica in September 2005, he gave the former president of Costa Rica, Abel Pacheco, a literary magazine containing Roh’s poems.
In return, Pacheco gave Roh a book with his poems in it. Former President Kim Dae-jung gave North Korean leader Kim Jong-il a screen that portrayed a copy of the June 15 North-South Joint Declaration that the two leaders discussed at their summit in Pyongyang in 2000.
For female leaders and first ladies, officials usually choose more feminine items. In a state visit on November 2004, former President Roh Moo-hyun gave the former first lady of France, Bernadette Chirac, a silver tea set, and this February, President Lee Myung-bak gave the wife of Japanese Prime Minister Yasuo Fukuda a sewing box decorated with mother-of-pearl.
In preparing state gifts, the protocol team has to keep accurate records. They have to know which items have been given to whom in previous years in order to avoid an embarrassing situation: giving the same gift twice.
Equally as important is the information on dos and don’ts in different countries and cultures.
Items that imply certain religious meanings are avoided, as are any references to war, atrocities or colonization.
However, as with all gifts, special doesn’t necessarily mean expensive. Gifts from the Korean protocol team normally cost around 1 million won ($1,000), but some countries go even lower.
Poland’s former President Aleksander Kwasniewski gave U.S. President George W. Bush a $30 paperback book on fighting terrorism, according to some media reports.
“The emphasis is more about being respectful and considerate,” said Jung Myeong-chae, 57, an expert in lacquerware inlaid with mother-of-pearl and one of Korea’s intangible cultural assets.
Jung’s works have been presented to heads of state since the 1980s.
“I am delighted that my works have been used to show our traditional beauty to foreign dignitaries and that they transcend differences in ideologies. This is more important than if they were sold at high prices,” Jung said.
One of Jung’s most favored works is a cabinet that he made using high-quality mother-of-pearl he had been collecting for about a decade.
Originally he wanted to keep it for himself, but he was persuaded to part with it and offer it to King Juan Carlos of Spain in 1996.
According to the book “What is Happening Inside the Blue House,” by journalist Song Guk-geon, the president’s name card is packed with the gift, the only time the nation’s leader uses a name card.
The Ministry of Foreign Affairs and Trade works closely with cultural experts to try to make a gift more personal. 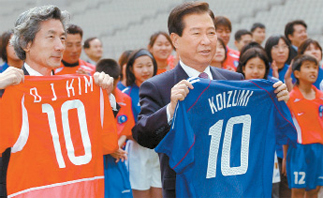 For instance, the ministry plans to develop more IT items embedded with the country’s traditional patterns and handicrafts.
At next week’s summit, presidents Lee and Bush are expected to exchange gifts. This trip will be the first time a Korean president gets entertained at Camp David, the U.S. president’s mountain retreat in Maryland.
On such an occasion, what have the protocol officials have planned? Ceramics? Lacquer-ware?
They are keeping the nature of the gift a closely guarded secret.