Loss of sight no obstacle to jazz singer

Loss of sight no obstacle to jazz singer 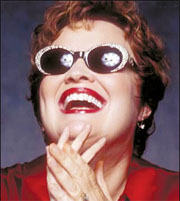 Diane Schuur has been compared to legends like Ella Fitzgerald. Provided by the organizer

The American jazz singer and pianist Diane Schuur has never been concerned about her visual impairment.
Her main worry in life is trying to maintain the highest possible quality in her music.
Schuur, 55, who lost her sight due to an accident at birth, will perform at the LG Arts Center in southern Seoul next Sunday at 5 p.m.
She has been compared to jazz legends like Ella Fitzgerald and Sarah Vaughan.
Scat singing is her speciality, a type of improvisational vocal work without words.
Schuur’s father, a fan of country music, gave his daughter a piano when she was very young. She gave her first concert when she was 9 at the Tacoma Holiday Inn in Washington, her home state.
Her first album, “Deedles,” rocked the charts in 1984, as did her two Grammy Award-winning albums, “Timeless” (1986), featuring saxophonist Stan Getz, and “Diane Schuur and the Count Basie Orchestra” (1987).
“Her upcoming performance in Seoul will reveal her timeless energy as a jazz diva,” said Lim Geun-woo from Plan Zenit, the music company organizing the concert.
She will sing numbers from her newly released album, “Some Other Time” (2008), which features tracks by George Gershwin.
“The way to enjoy Schuur’s voice is to close your eyes and listen,” Lim said.