A unique case of adoption

A unique case of adoption 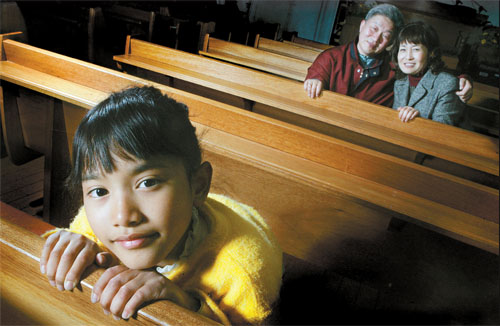 Lee Ha-young (fore) and her adoptive parents Lee Young-mo and Ha Kyoung-ae at the Presbyterian church near Daegu where Lee is the pastor. By Jeong Chi-ho

DAEGU — Lee Ha-young, 10, had been crying.
“A few boys at Ha-young’s hagwon [private academy] call her names like ‘African,’” said Ha-young’s mother, Ha Kyoung-ae, 52, as she gently brushed her daughter’s fringe off her forehead. “I’m thinking of making a complaint tomorrow.”
Ha-young lowered her eyes and didn’t say much. She just clung to her mother.
She’s been teased before about her dark skin, and she still gets upset, even though she’s been aware that she looks different from the rest of the kids in the neighborhood for as long as she can remember.
“When she was much younger she would fight girls or even boys who would make fun of her because of her different skin color,” said Lee Young-mo, 54, the girl’s father.
“But as she got older and the boys her age got stronger she became more timid and held her sorrow within herself,” Lee added.
The parents said seeing their daughter struggling to cope with the teasing breaks their hearts, especially when she used to put on cosmetics to make herself look less dark.
She doesn’t do that anymore; she’s just like any other Korean child. She loves the K-pop girl band Wonder Girls and TV cartoons.
The only difference is that her biological parents are Indonesian. They were illegal workers in Daegu when they discovered they were going to have a baby.
According to Lee, they met at a center for illegal foreign workers run by Daegu Sungmyung Presbyterian Church.
“Working in a foreign land for three years, they probably found comfort in each other although they were both married to others,” said Lee. “Under Islamic law, if two people commit adultery, they face the death penalty,” Lee added.
Lee said he heard that the biological mother wanted to raise the child, but the biological father refused.
“The first time I saw the child wrapped in a blanket I knew immediately that I had to have her,” said Ha. The prospective parents met Ha-young at a church meeting to decide what to do with the little girl after her biological parents decided to give her up for adoption.
“It wasn’t like we were looking to adopt a child, particularly of foreign origin,” said Ha. She and her husband have two biological children of their own.
Adoption has been a thorny issue in Korea for many years, as the country is one of the top sources of children to other countries. According to World Partners Adoption Inc., a nonprofit organization, Korea ranked fourth in the world as of 2006 in sending children for international adoption with 1,376 children, behind China (6,493), Guatemala (4,135) and Russia (3,706). The Korean government, though, disputes the figure for Korea, putting it at 1,899.
However, the story is different now. According to the Ministry for Health, Welfare and Family Affairs, for the first time in Korea domestic adoption by families in Korea (1,388 children) has exceeded international adoptions (1,264).
This represents a fundamental shift in attitude. Korea, as a Confucian-heritage nation, places a great deal of importance on bloodlines, especially having sons.
But cases of high-profile celebrities adopting have spotlighted the issue. The actor Cha In-pyo has adopted two children, to add to his biological child; the actress Yoon Suk-hwa, two; and the comedienne Lee Ok-ju, one.
Economics and recent empowerment of women in Korea have fueled this social change. “To raise adopted children, the family has to achieve a certain economic stability,” said Park Geum-yeol at the Ministry for Health, Welfare and Family. “Many Korean families are better off than before, and we believe the number of adoptions in Korean homes has gone up as well.”
The government has even designated an Adoption Day, which falls on May 11, to raise awareness and encourage Korean families to adopt Korean kids.
However, Ha-young’s case is exceptionally rare.
Although Korea has 20 adoption institutions, including the oldest, Holt Children’s Services, none deal with Korean families adopting kids from overseas.
The government does not track adoption of foreign children in Korea.
“We monitor children who are either lost or whose parents have intentionally given up [their children],” said Park. “Children who are adopted through other means, like agreements between the biological and the adopting parents, are not monitored.”
The Mission to Promote Adoption in Korea said it receives the occasional inquiry about adopting foreign children. In fact, they received such a call last week.
Han Youn-hee, an executive at the adoption agency, said more non-Korean children are born in Korea each year due to the huge influx of legal and illegal foreign workers. 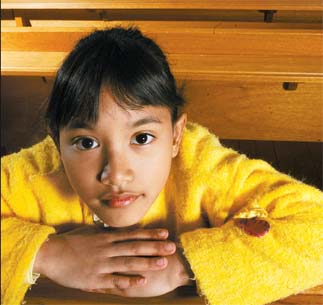 “Over the years we have received calls asking about the adoption of foreign children,” said Han. “However, it is almost impossible to adopt a foreign child here legally, regardless of whether that child was born here or not.”
Han said adopting foreign children involves high-level agreements between Korea and the home country of the child involved.
“Koreans should be allowed to legally adopt foreign children,” said Han.
“If we value life, the parents’ origin should not be an issue. Children born and raised in this country are all very similar, no matter the race.”
As for Ha-young, she was only two months old when she met her adoptive parents.
Lee was a pastor at a church in Goryeong County in North Gyeongsang for 10 years when the couple met the baby girl.
The couple was attending a weekly meeting of North Gyeongsang pastors and spouses when Ha-young’s future was under discussion. Another Korean family had planned to adopt her, but the arrangement fell through at the final moment.
When Ha-young was born she weighed only 1.9 kilograms. Ha heard that the biological mother bound her stomach to avoid looking pregnant, which may have caused her premature birth.
“She was very tiny and skinny and you could see her ribs through her thin skin,” said Ha.
When the couple went to the Daegu local government to ask about adopting a foreign child, they were told that the process would take at least six months and that Ha-young would have to be institutionalized.
“I thought Ha-young could be harmed and stressed if she were placed in an institution for such a long period, so we decided to register her as if my wife physically gave birth to her,” said Lee.
This was a very easy process, surprisingly. “The public servant didn’t even look at Ha-young’s picture and accepted what was written on the paper,” said Lee. 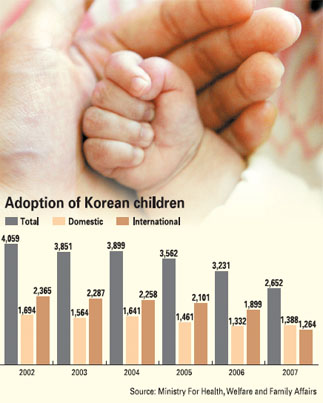 By law, Ha-young is now the birth child of Ha and her husband, and by nationality she is Korean.
“She may have not been born from my womb but she was given birth from my heart,” said Ha.
Although the girl’s new Korean mother was excited about having a daughter, the father was concerned.
“He was worried that some of the people at church would oppose the adoption of a foreign child,” said Ha.
The worries came true and one church elder strongly objected. The Lees had to move out and find another church to begin their life with their newly adopted daughter.
They settled in Gachang County near Daegu. Since then, Lee has been managing a small church called Gachang Jaeil Presbyterian Church. Their monthly income has been halved, but the couple said they aren’t worried because they have found a new gift, an angel.
“She’s what I think about all the time,” said Lee.
The biggest obstacle the family faces, however, does not come within the family, but from outside. The prejudice that is still deeply rooted in this homogeneous country has disturbed Ha and Lee.
“When I walk with my daughter to a public bath or visit the supermarket, I hear people whisper ‘She must be living with a Filipino,’ or they stare at us with unpleasant looks,” said Ha.
The girl’s father said people look at his family strangely when the three of them walk together. Only when he tells people that Ha-young was adopted will people nod as if they understand.
“I never had any prejudice against foreign people whether they have dark or light skin,” said Ha. “It really hurts when people look at us with such prejudice.”
Lee is highly critical of Korea for its apparent inability to move on. “People talk about globalization but the truth is nothing has changed and Korea still relies heavily on homogeneous bloodlines,” Lee said. “How can we advance and compete in the world with such backward prejudices?”
In the eyes of her parents, Ha-young is no different from any other child. But they have to deal with issues that no parent would wish to confront.
“When Ha-young was about 6, she disappeared one night and I found her hiding under the desk in her room,” Ha explained. “She looked at me and asked ‘Where do I come from?’ I was startled and the question sharply pained me. She then asked me ‘Where’s Indonesia?’”
Ha said she had been preparing for a moment like this, but she still found the situation very difficult.
Ha-young now accepts who she is but she doesn’t ever want to go to Indonesia.
“I may not be teased because of my skin color [there] but I don’t want to leave behind my family and friends who have given me so much,” Ha-young said.
She is also afraid she might meet her biological parents.
Her adoptive parents have pictures of her biological parents, but Ha-young is still troubled by a question that stays with many children who are given up for adoption: How could the biological parents ever abandon their child?
When it was time to depart, Ha-young waved goodbye and called out, “Please come visit us again.”
Her accent is pure Daegu.