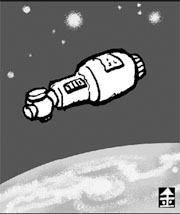 In the city of Yongji, Shanxi Province in northwest China, the White Stork Tower stands again. In 2002, the Chinese government completed reconstruction of the ancient tower where it stood for millennia until it disappeared. Only the name survived and it had seemed impossible to build another tower just like the old one.
The White Stork Tower is situated where the Yellow River turns abruptly toward low-rising mountains to the southeast.
Because of the stunning scenery, it was frequented by poets and painters.
“Climbing White Stork Tower” by poet Wang Zhihuan of the Tang Dynasty is an excellent piece of poetry that transcends time and which people today still enjoy reading. The poem reads:
The midday sun slips behind the mountains
The Yellow River turns to the sea.
Trying to see for a thousand miles
I climb one more story.
The sinking sun lights up the scenery far away. The view sweeps from afar to the Yellow River right below the White Stork Tower. As the eyes move from the vista afar to the scenery close by, one feels the vastness of the land. The sun sets vertically. On the other hand, the Yellow River moves horizontally, laterally. The vertical and the horizontal intersect.
We also feel the flow of time, the daily setting of the sun, the Earth’s eternal movement, the continuity of flowing water.
Although we sing about the scenery, we feel as a person immersed deep in nature. The next line makes us exclaim.
I climb one more story.
Though few people can recall the first two lines, a lot of people know the last one. The poet wrote the verse to encourage those stepping ahead in search of progress.
This is good. What is precious is the will to step ahead in order to see farther away.
It shouldn’t be literally interpreted as climbing one more story to see farther, but as people’s sincere effort to expand ourselves further.
The country has finally sent a Korean to the wide open space of the stars. Korea is the 36th country to send a person into space.
It is a bit late, given that Korea ranks near 10th in the world in gross domestic product and economic power. Nevertheless, we shouldn’t be criticizing ourselves for not having accomplished more. What is more precious to us now is the desire to expand ourselves by stepping ahead to see further.
We sincerely hope our first step into space will open our hearts and vision to the endless open space.