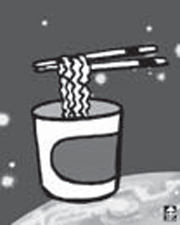 John Glenn, the first American to orbit the Earth, carried semi-fluid applesauce aboard Friendship 7 in 1962.
Korea’s first astronaut Yi So-yeon brought her favorite foods, such as kimchi, instant noodles, rice and soybean paste, on her voyage to outer space. Space foods undergo constant evolutionary change.
In space, people eat three balanced meals a day. A daily diet totaling between 2,000 and 2,200 calories is given to male and female astronauts, respectively. The taste falls below most standards.
The first requirement in the manufacturing of space food is that it be light in weight.
Dragging 1 kilogram of food to outer space costs 50 million won ($51,250). Freeze-drying and pulverization of the space food are mandatory to reduce the production costs.
Additionally, it is of great importance to give sanitation due consideration in the production of space foods. Since Columbus (the International Space Station module) is not equipped with a refrigerator, it is too difficult to store up large stocks of food for a long period.
The Hazard Analysis and Critical Control Point is an internationally recognized system to ensure food safety and protect consumers. Its origin is deeply rooted in the beginnings of space exploration, to manage the preparation of food for manned space flights. The lack of a refrigerator on the ISS module is mainly due to a lack of electricity.
Yi’s consumption allowance for the 10-day period of her space trip is no more than 20 watts of electricity.
The United States and Russia share the responsibility of providing astronauts with space food. Records show that the United States and Russia listed 200 and 130 food and beverage items, respectively, as of January 2008.
Even though there are no differences in their menus, they differ in packaging materials and container openings. The Americans use light disposable packaging materials, such as aluminum foil, while the Russians use transparent packaging. The dispensers for American products remind us of gas valves on LPG vehicles, while Russian products resemble the valves of gasoline-powered vehicles.
The American space foods are better equipped with airtight containers than the Russians’.
As shown in these cases, the preparation of space foods has greatly contributed to improving the container and packaging technologies of foods on Earth.
I wonder if Yi is enjoying the taste of space noodles on board the ISS module.