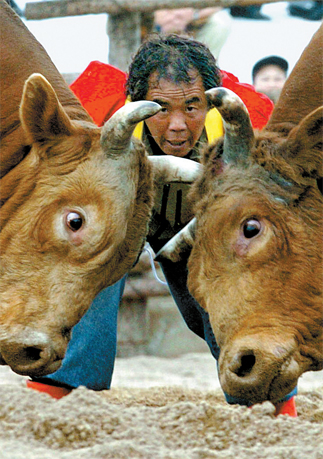 Bulls try to see eye to eye ahead of a fight at last year’s Cheongdo Bullfight Festival. [JoongAng Ilbo]

The Cheongdo Bullfighting Festival is drawing near and Byun Sung-young is anxious about his bulls.
At 58, Byun is a veteran trainer with four decades’ experience under his belt. But he still gets nervous before a fight.
“Bring the bulls into the sun,” he shouts, a worried look etched on his face. His biggest concern in the lead-up to tomorrow’s festival is that one of his animals catches a cold.
Byun’s headaches could have been a lot worse, though. The annual festival, which will take place at a temporary bullfighting stadium in Beomgok Village in Cheongdo, North Gyeongsang, almost got banned.
In January, the Ministry of Food, Agriculture, Forestry and Fisheries amended the Animal Rights Law to prohibit activities that exploit animals for gambling or entertainment.
Not everyone was happy. Groups that hold animal fighting festivals fought back and the Cheongdo County Office won a reprieve, though it had to delay its festival to April — it’s usually held in March.
To convince the ministry that bullfighting is not cruel or exploitative, the organizers argued that the sport was an old tradition that was part of the county’s history.
“Bullfighting is a gentle art,” said Jeong In-hag, a county official organizing this year’s bullfighting festival, which ends April 16. “It is a traditional folk game.”
In March, the ministry relented and ruled in favor of allowing the bulls to lock horns legally, but maintained the ban on organized fights involving horses, dogs and chickens.
The origin of Korean bullfighting dates back to when tribes began cultivating the peninsula and keeping livestock.
According to Jeong, the bulls would face off with each other, head to head, while they were grazing. To while away a day in the From BULL, Page 1. 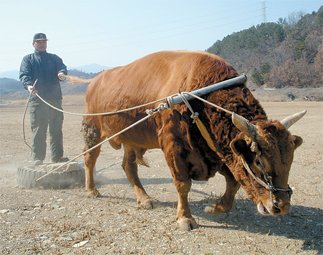 Bulls try to see eye to eye ahead of a fight at last year’s Cheongdo Bullfight Festival. [JoongAng Ilbo]

fields, cowherds improvised fights, with each owner hoping his bulls were bigger and stronger.
The sport has remained popular. Last year 500,000 spectators attended the Cheongdo Bullfighting Festival, according to official figures.
During colonial rule (1910-1945), the Japanese abolished bullfighting, fearing any festival that encouraged Koreans to get together. After independence, the sport saw a revival, and by the mid-1970s it was considered a traditional game. Festivals like the one at Cheongdo, which started in 1990, become more popular in southeastern regions like Masan and Jinju.
Farm workers would match up the bulls and bet buckets of makgeolli, raw rice wine, instead of cash.
Byun was 13 years old when he started pulling bulls for some training.
“The number of cows you possessed represented wealth in those days,” he recalled. “Rich families owned more bulls, which meant more spare cows.”
During Chuseok, Korea’s mid-Autumn festival, Byun walked his bull to Masan, 120 kilometers (74.56 miles) away, for his first festival. “It took several days to arrive,” the trainer said. “But it was worth it.”
The owner of the first-place bull in the Masan festival received manure as a prize and travel costs.
Byun has been in the business long enough that he knows a good combat bull when he sees one. They have thicker horns, bulky bodies, small eyes and ears and short legs, he said.
But strength is only part of the equation, he said. As with any professional fighter, skill and technique are essential.
A prize-fighting bull will duck and dive, shove and butt, and use its horns for swift uppercuts.
With such skills in use, bulls get hurt. Byun’s 9-year-old Rambo broke his left horn last year and has been sidelined ever since. With this kind of injury, Rambo could have ended up sliced and diced on the butcher’s counter, but he was pardoned. He lives with two different-sized horns.
Rambo wasn’t hurt badly, but animal protection activists claim he probably suffered emotional stress.
“Bullfighting is a clear act of animal abuse,” said Lee Won-bok, the head of the Korean Association for Animal Protection.
Bullfights might not be as brutal as dog fights — bulls are unlikely to bite each other’s ears off — but the fighting takes its toll on the bulls’ health.
Another issue that rankles animals rights groups is that the owners of the bulls might give their animals performance-enhancing drugs. 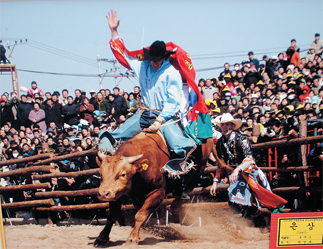 “To encourage the fighting, bull trainers administer stimulants,” Lee said.
Nor surprisingly, the activists were enraged when the ministry backed down and gave bullfighting the green light. They presented the government with a petition, and when they were ignored, they demonstrated in front of the ministry building in Gwacheon, Gyeonggi.
Lee said the ministry’s decision to allow bullfighting was unilateral.
“Bullfighting is becoming less popular in Spain,” he claimed. “Spanish animal rights supporters protest outside Barcelona City Hall, demanding that the government abolish bullfighting.”
In Spanish bullfights, the matador kills the bull. In the Korean version, bull-to-bull only.
Yet in Korea, the government is actively developing bullfighting as a tourist attraction.
The argument isn’t over yet.
Several animal protection organizations will picket the stadium in Cheongdo this weekend. They will be trying to convince visitors the festival is little more than organized animal abuse.
But Kim Moon-kap, a deputy director at the ministry, said the decision to allow the bullfighting festival to continue was a compromise.
“We [the ministry] reflected the voices of animal rights activists,” Kim said, adding that bullfighting is less harmful than horse or dog fighting.
Horse fighting, he said, is dangerous because a horse’s kick can cause serious injuries. The sport was popular on Jeju Island, but under amended animal rights law, it’s now banned.
Naturally, Byun was relieved that the ministry allowed bullfighting to continue, and he was quick to point out that bullfighting actually benefits the bulls.
While most bulls get sent to the slaughterhouse after two or three years of life, fighting bulls live longer.
“The trainers look after them and they eat healthy food to be fit for matches,” Byun said.

In addition to regular helpings of fodder, they are fed boiled beans and restoratives like medicinal herbs, mudfish, snake meat and octopus.
Beongae, one of Byun’s fighters, is 19 years old and retired. He is looked after by the Cheongdo Public Business Corporation, a wing of the local government that helps look after 100 fighting bulls.
Unlike his less fortunate contemporaries, Beongae will not end up on a grill or in soup. Instead, he will be buried with a stone monument engraved with his name, age and his fight record.
But to achieve this kind of status, a bull has to be trained hard. The regimen involves running around the yard with tires tied to their legs.
“It’s just like a professional sports player practicing for an upcoming seasonal match,” the trainer said.
Horn care is also crucial. The trainers file the bulls’ bony headpieces to a fine point as a match approaches.
“It’s either victory or defeat for the bulls,” Jeong said. “They are gentleman-like. When a bull senses he’s going to lose, he quietly backs away.”
Ira McKillip, a rodeo cowboy from Nebraska, has no doubt that the trainers take good care of the bulls at Cheongdo. He’s been coming to the festival since 2004.
“When I look at a bull, I know if it has been taken care of or abused,” said McKillip, who has been around bulls all his life.
They are healthy and strong and they are not forced to fight, he said.
“The owners treat the bulls with respect even if a bull loses. The bulls will not compete unless they have the desire to compete,” he said.
The animal protection people will be trying to convince visitors at the festival tomorrow that people like McKillip underestimate the pain the bulls go through.