Dogs may be designated as livestock

Dogs may be designated as livestock 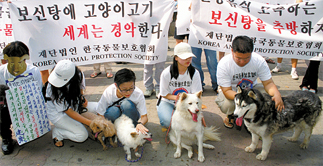 Animal rights groups have been protesting dog consumption but the city of Seoul may list dogs as lifestock to protect public health. [JoongAng Ilbo]

“Whap. Whap. Whap.”
“That’s not it. Let’s try another,” says the dog handler while lifting a long metal rod to hit another dog’s back. Navigating the rod expertly between the bars of a cage where a dozen dogs are herded together, it’s only the noise of the stick that breaks the rhythmic sound of the rain. “Whap. Whap. Whap.”
“There is a certain sound when there is the right amount of meat,” explains the handler, a man in his 40s, his half-closed eyes searching the cage. After intensely listening to the different sounds he finally nods his head in satisfaction and points to a medium-sized dog of light brown color. “That should do it,” he says.
A noose attached to a stick is now in the hands of the handler who aims the device inside the cage for the marked dog. The yelping dogs scatter to the corners of the cage, trying to avoid the fishing noose. “They know what’s coming,” he says. It takes some 10 minutes until the “light brown one” is caught. The man, pulling the struggling dog behind him, goes to a nearby spartan room. A sharp stick is hanging on the wall and there is a steel container in one corner. Next to it is a round, white tumbling box. While pressing the dog’s head to the floor with the noose device, the other free hand reaches for the stick. It’s electrically tipped. “Tens of thousands of volts in here,” says the handler in a matter of fact tone. A slight touch to the head of the dog is all that is needed. Death comes almost instantly. In a few seconds the twitching body stops moving. Legs stop trembling.
Now the carcass is thrown into the steel container that contains hot boiling water which the handler says is kept at 70 degrees Celsius (158 Fahrenheit) around the clock. It is used to soften the meat and make the process of separating the fur from the body easier. After some stirring, the body is thrown into the tumble dryer that removes the fur. The bare carcass is now carried over to a grill that is next to the cage.
There the handler uses a torch to burn away any remaining fur. Then comes the chopping.
“What about the internal organs?” the dog handler asks me. I don’t take the organs but another customer waiting in line is not shy about asking for them, because for some dog meat lovers, they are considered a delicacy. The whole ordeal takes about half an hour. The price: 150,000 won ($153) at the Gyeongdong Market in Jegi-dong, central Seoul.
The current going rate for one dog starts at 120,000 won and can be as high as 200,000 won. Between stands of peanuts sellers and vegetable stands there are shops that advertise with billboards: Dog meat. Some shops have their cages filled with dogs right next to their stands. Customers that want a whole dog place their order and wait while the meat is often prepared nearby. Separate pieces are usually sold by weight, 5,000 won per geun (1.3 pounds/0.6 kilograms). 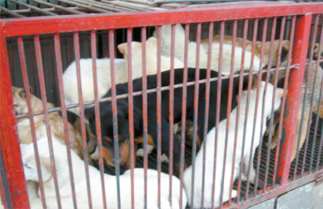 The Moran Market in Seongnam, Gyeonggi is another place well known for selling dog meat and dogs for consumption. Industry experts say that up to 25 percent of Korea’s dog meat is sold here while the rest comes from individual farms in the countryside that breed dogs exclusively for consumption. Some restaurants that serve dog breed the animals in house.
Sometimes cages look filthy and there are no official government stamps put on the meat packages handed to customers, like more conventional beef. Now the Seoul city government is considering changing all that. In a bid to reduce the health risks of dog meat eaters the city wants to put an official livestock stamp on dogs, a move that has angered animal activists here who are now protesting by seeking signatures of supporters to oppose the measures. They also are organizing protest rallies. Nevertheless, Seoul officials hope the food safety measures that come with a livestock designation will enhance the hygiene in which dogs are slaughtered and sold, eventually turning public opinion. “Last year the Research Institute of Public Health and Environment conducted a study and it discovered germs,” said Oh Jae-ho, an official with the city’s food safety department. “That is why we think that putting dog meat consumption into the flow of livestock monitoring is needed.” He admits that doing so would make the current “abhorrent food” label even more obsolete. That label forbids restaurants in the Seoul area from selling dog meat for consumption by law.
The order was introduced in 1983 but the long-standing custom of eating dog meat has hardly faded. Oh estimates that 500 to 600 dog meat restaurants operate in Seoul alone. “We have been told that last year during summer 5 to 6 million dishes were sold,” says the official, who concedes that city officials have long given up on cracking down on the restaurants. “We simply don’t have the manpower to check every restaurant,” says the official. “Since many people eat dog meat, we think it’s better to bring the issue into the limelight for the sake of public health.” 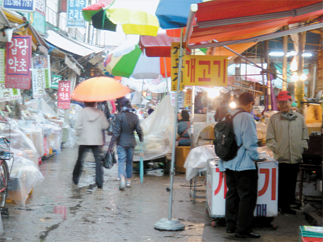 Traditional markets such as the Gyeongdong Market offer dog meat for consumption. By Brian Lee

While on paper an order exists forbidding the consumption of dog meat to a limited area, when it comes to slaughtering the dogs, it’s a gray area under the law. “We have a problem here because the current animal protection law is about torturing animals but it says nothing about killing dogs for the purpose of consumption,” says Park Yong-chun, an official of the city’s animal management department.
South Korea introduced its first Animal Protection Laws in 1991 with revisions made this year, but the law focuses on preventing cruelty rather than slaughtering for food. Oh Jae-ho suggests that putting the livestock designation on dogs would help make transparent the whole process of slaughtering dogs and also protect pets. Another dog handler, speaking on condition of anonymity, admits that owners tired of their pets or people who find lost dogs often seek the handlers. “They are not the best meat so they are fed to other dogs. If they are big enough they are sold like the rest,” says the handler. Essentially mongrel dogs are the main source for dog meat. They are widely known as “hwanggu,” or “nureongi.” These dogs are not pets but are bred exclusively for consumption.
Nevertheless, on the day this reporter watched the dog slaughtering, well-known breeds such as Rottweilers could be seen in the cages as well. The new amendment prohibits people from selling or killing abandoned animals with a fine of not more than 5 million won.
For civic groups the issue at hand is not only that the inclusion of dogs as livestock could trigger a surge in dog meat consumption, but also a further breach of a principle held by opponents that says you shouldn’t eat man’s best friend.
“People are going to think that dog eating is O.K.,” said Geum Seon-ran, president of the Korea Animal Protection Society. “Dogs are the closest animals to humans. An official government stamp is the wrong signal to give. Why do we even have animal protection laws?”
The old tradition has caused South Korea some international embarrassment when other countries raised the issue prior to the 1988 Seoul Olympics. Today, the environment for dogs has changed dramatically. According to the Korea Kennel Federation, an average of 25,000 to 30,000 thoroughbred dogs are being registered annually. Nationwide 3.5 million to 5 million dogs are believed to be kept as companions. “If you start this process of separating dogs for consumption and pet dogs you will open a floodgate. We think that dogs should not be consumed at all,” says Chung Tae-gyun, an official with the organization. “It’s against global standards.”
In line with the country’s ancient folk calendar, dog meat lovers eat gaejangguk (dog-meat soup), which is believed to make up for energy lost during summer heat. Dog meat is also used in gaesoju, a mixed drink that includes dog meat and other herbal ingredients used in Oriental medicine such as antlers. The ingredients are put together and boiled. The mixture is then divided into small vinyl packs that doctors tell their customers to eat daily. Another commonly served dish is sliced dog meat. A whole dog usually costs around 300,000 won in restaurants.
Places such as the Gyeongseong Oriental Medicine Clinic located near the market ask 350,000 won for a month’s worth of gaesoju, half the price if the customer provides the dog meat or the dog. Customers have to pay 20,000 won extra for slaughtering.
While Seoul is now opting to control the issue rather than stop dog eating, ordinary citizens seem not to care how the dog is prepared, nor are there signs of a slowdown. “It won’t make any difference at all,” says Son Jang-sik, who operates a dog meat shop at Gyeongdong Market. “Dog meat is now popularized. It’s not just a delicacy strictly for males. I have every sort of customer come here every day.”

“My grandmother lives in the provinces and she sends dog meat to keep our family healthy,” says Kim Yoo-jin, who works for a conglomerate in Seoul. “Her packages keep coming.”
Though in the past it was largely considered a stamina food for males, Lee Nam-gyu, a taxi driver who occasionally eats dog meat with his friends, has other reasons to eat the dish. “Doctors say it’s good for getting back in shape after a surgery or to heal broken bones,” says Lee. “It’s the tenderness of the meat that feels like it’s melting on my tongue. If you ask me, it’s like eating beef or chicken.”
Some dogs are hanged or beaten with a stick, methods that supposedly make the meat softer, according to industry insiders, but science has yet to find its way into this area. “It’s all a myth that has no scientific proof yet,” says Kim Du-hwan, a professor of animal resources technology at Jinju National University. He adds that with beef and pork, the preferred method is to stun the pig or cow unconscious and then bleed it to death by cutting the throat. He explains that how relaxed an animal is before the slaughter determines the meat quality. “If the muscles are contracted than you’ll have meat that is tough,” the professor says.
Aware of the potential fallout that the city’s decision could cause, other government agencies here are trying to keep their distance.
“It’s the sole idea of the city. We have not been consulted at all,” says Lee Young-chul, an official with the Ministry for Food, Agriculture, Forestry and Fisheries. “I don’t think we are planning to even consider this option.”