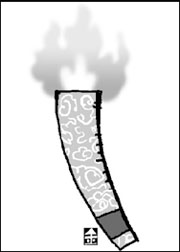 Ancient Greeks believed that Prometheus stole fire from the gods and gave it to mortals for their use. According to Greek mythology, the origin of human civilization lay in that theft. Since ancient times, Olympians have made fire in the temple of Zeus and Hera, honoring the great theft by Prometheus. Calling this fire sacred was just proper.
The sacred fire was introduced in the modern Olympics in 1928 in Amsterdam. However, it consisted only of lighting the fire in a tower at the site. The Berlin Olympics, held in 1936, was the first Olympic Games in which the sacred fire was lit in Olympia, the birthplace of the Olympics, and taken to the site.
It was Germany’s idea to use the Olympics as propaganda, extolling Nazi glory. On Aug. 1 of that year, at the Berlin sports stadium, after Hitler proclaimed the Olympics open to a gathering of 100,000 spectators, the highlight of the opening ceremony came when the sacred fire arrived in the stadium at the end of its journey from Greece through the European continent.
Richard Strauss, then 70, conducted the first performance of the “Olympic Hymn,” which he composed. The sacred fire that honored civilization and the gods was used to light up the propaganda of Nazism.
Today, the arrival of the sacred fire has become the highlight of the opening ceremony at every Olympics. Famous athletes such as Michel Platini and Muhammad Ali have been featured in Olympic torch relays. Ever more dramatic techniques of lighting the Olympic flame at the Games have also been introduced. The scale of the events taking the sacred fire to the Games site has also grown larger each time. Starting with the Athens Olympics in 2004, the sacred fire has roamed the whole world, including the African continent. Although there were times when the Olympic torch was blown out due to strong winds, its journey to deliver the sacred flame to the Games has gone smoothly. Who would pour cold water on the sacred fire on its way to light up the world’s festival of peace?
But this year is a little bit different. Wherever the sacred fire has headed, it has became the target of protest demonstrations against China’s hold on Tibet. The Olympic torch was doused three times in Paris and a runner carrying it had to hide in a warehouse in San Francisco. Unlike previous cases when the host country used the Olympics to promote its regime, the protesters are using it as a means to shame the host.
As the protests continue, the International Olympic Committee is reportedly considering doing away with the torch relay for the next Olympics in London.