[Viewpoint]Vote for a new election system

[Viewpoint]Vote for a new election system 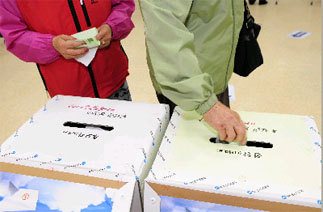 Voters cast ballots on Wednesday at a polling place in Yeongdeungpo, Seoul. [NEWSIS]

Participation in the National Assembly elections last week was 46 percent, less than half of all eligible voters.
Local elections began to be held nationwide in 2002. The most recent result was only the second time that the voting rate in a national election had fallen below 50 percent; last week’s elections also saw the lowest rate of voter participation ever recorded.
Eight out of 10 voters thought the 63 percent voting rate in the presidential election held last December was on the low side; the 46 percent turnout in the 2008 National Assembly elections is even more shocking.
The voting rates in Korean elections have been on a continuous decline. Of course, the trend is not unique to Korea.
It is a common phenomenon that has been taking place in most countries since the 1980s.The problem here is the magnitude of the fall. The voting rate in Korea has fallen more than 20 percent compared to what it was in the 1980s.
In comparison with declines of about 8 percent for the same period in leading democratic countries, the slide in Korean voting is unacceptably big.
A modern representative democracy is a political system based on the premise that citizens with a certain amount of knowledge, education, sense of responsibility and interest in social problems participate in its processes.
Furthermore, a democracy is a system in which the will of the majority, not the minority, must prevail in the process of decision making.
In this respect, it is essential that many voters participate in the elections, which is the regular channel by which the people register their preferences to the political elites.
After all, it is through elections that society sets its goals and decides the priorities in the distribution of the nation’s resources. Therefore, if the voting rates are low, the views of the voters regarding political elites can be distorted.
In the last legislative elections, more than 10 electoral districts recorded a turnout below 40 percent.
If someone is elected with less than one-third of one half of the total voters, that person cannot claim a mandate to represent the electorate. Voters’ active participation in elections is essential if we are to keep the legitimacy of our political system.
What, then, are the factors that affect the participation of voters in elections? They can largely be divided into personal, environmental and systematic aspects.
In the personal aspects, the demographics and sociological characteristics, social attitudes and values are important.
In other words, whether or not a person votes depends on that person’s gender, age, income and education, among other things.
Political interest and the sense of efficacy and political reliability also affect whether or not a person will vote.
A very important part of this is whether voters see increased participation as a way of expressing political opinions.
In this case, the voter expresses dissatisfaction with the party, candidates or the political system overall by not voting.
It has been reported that there were ballots cast with handwritten notes to the effect that there is no one worth voting for.
Such people went to polling stations because they were obliged to vote, but they disqualified their own votes.
This is an expression of political dissatisfaction and it occurs because there is no appropriate system for voters to express themselves.
Therefore, the focus goes to the relationship between the election system, the party system and voting rates. In the United States, congressional elections — just like Korea — continue to record a voting rate of about half of the eligible voters since the 1960s.
In the United States, however, the voter registration system is a decisive factor that leads to a low voting rate.
Simultaneously, the election system which tends to result in a high turnover, the comparatively low levels of differentiation between political parties and the high re-election rate of incumbent congressmen are also factors that dampen the voting rate.
In other words, voters do not feel that their political decisions are being reflected properly in the political system through the election process.
In contrast, the voting rate is comparatively high in Europe, where a proportional representation system is mainly used to elect members of parliament, and therefore many political parties exist.
European voting rates starting in 1945 had normally been between 72 percent and 92 percent. The mandatory voting system, high levels of education, comparatively easy voter registration systems and national scale of elections, among other things, also have had a salutary effect on the voting rate.
One thing for sure is that voters will think their political opinions are being properly reflected in the political process, and the range of political selections presented to voters during the elections is wide, too. Europe has a systematic environment that allows voters to feel satisfied politically.
It is not fair to blame non-participation in voting solely on the voters. Ultimately, what is most important is to establish an appropriate system to allow voters to express themselves and reflect their opinions.

*The writer is a professor of politics at Dongguk Universtiy. Translation by the JoongAng Daily staff.