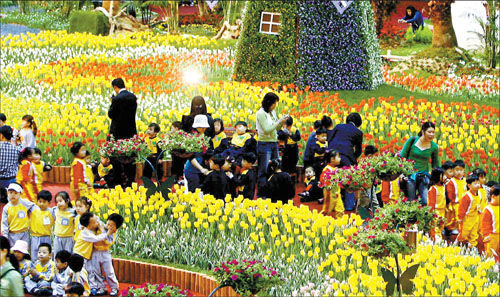 Toddlers inspect the tulips and azaleas at the Goyang International Flower Show in 2006. [JoongAng Ilbo]

April erupts in an explosion of pinks, yellows, purples and whites as flowers bloom and trees blossom throughout the peninsula.
Not only that, the roads around Mount Namsan become an exhaust-filled parking lot as families and friends motor past to take in the burst of new life.
Eyeing an opportunity to put the cash register into gear, local governments are pouring money and time into setting up flower exhibitions with a view to boosting regional and international sales.
The Goyang International Flower Show is one of the leading flower expos in Korea, held once every three years.
The other two years are not fallow: Smaller exhibitions targeting domestic visitors are popular.
This year the Goyang exhibition will feature 500 different kinds of flowers for two weeks starting April 24 at Lake Park in Ilsan and at a nearby indoor exhibition hall.
One of the highlights will be a replica of Sungnyemun, otherwise known as Namdaemun, which burned down in February this year. The six by five meter arrangement was made using a floral mosaic design, said Choi Young-seon, a public relations official at the flower show.
Mosaics have been popular at the exhibition ever since a leafy Captain Hook, Peter Pan’s nemesis, was introduced at the show in 2006. 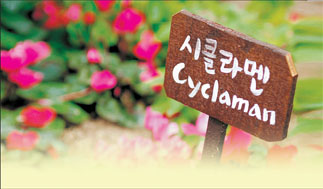 Competition is stiff and entrants for the competition know an award translates into sales.
Kim Hye-sook, 44, won an award from the Ministry of Food, Agriculture, Forestry and Fisheries last year with her floral rendition of the Korean Peninsula.
Nam Hyung-seok, 39, who created the word for “sand” with flowers won the Gyeonggi government award the same year.
Despite the fact that last year’s competition, which attracted 160,000 people, was a domestic event, eight companies from five countries including Taiwan, Germany and the United States participated.
Additionally buyers from 10 countries including South Africa, Mexico and Germany visited.
The event helped win an export contract worth over $2.2 million.
This year 10 companies from six countries including Japan, Germany, Singapore and China will be participating.
In 2006, the show, with its 7 billion won ($7.18 million) investment, earned 6.9 billion won, including income made from restaurants near the exhibition.
Woo Ji-hwan, chief manager of the Goyang International Flower Show, said, “Flower sales were naturally stimulated as visitors were given the opportunity to personally arrange them and make their own flower- pots.”
The Gwangju Spring Flower Expo 2008, which was held for 10 days this year starting March 21, attracted 98 companies from Korea, China and Japan. Export contracts amounted to roughly 350 million won with the help of the flower expo.
In its first year, which was 2007, around 170,000 visitors stopped by.
“The Gwangju Spring Flower Expo is an event where visitors can see spring flowers in an indoor venue earlier than in other parts of the country,” said Kim Byeong-guk, a public relations officer at the Kimdaejung Convention Center, which managed the flower expo.
Kim added that visitors could enjoy various kinds of flower culture through 15 different theme parks during the expo.
The expo organizing committee estimates that the regional economy has earned 10 billion won from the event, 25 times the initial 390 million won investment.
Other smaller regional cities are planning similar flower festivals. April and May will see some 30 flower festivals across the country, including the Jinhae Cherry Blossom Festival, which ended on Sunday.
The Mount Sobaek Royal Azalea Festival in Danyang and the Azalea Festival of Mount Goryeo on Ganghwa Island are waiting for visitors or waiting to be opened.
In May next year Anmyeon Island on the West Coast is planning an international flower expo called Korea Floritopia. The organizing committee says 77 companies from 21 countries will participate.
The last flower exhibition held in this area was in 2002. The organizing committee is looking at a 154.9 billion won economic boost to the region.
“The expo will be an opportunity to boost the agriculture and tourism industry in the region, whose economy has been hit hard by the recent Taean oil spill,” said Min Jun-gi, an administrator of the Korea Floritopia.
The organizing committee of the Goyang flower show is planning to increase its exports of cactus and orchids.
The Gwangju flower expo organizing committee is working on exporting flowers displayed during its show to central Asia, including Kazkhstan and Uzbekistan.
“Until now most of the flower exhibitions in this country lacked foreign buyers as the flowers that were on display were foreign flowers,” said Kim Doo-hwan, a professor at Konkuk University.
“If we develop new flowers in Korea, we can boost exports, tourism and create a boom of Korean flowers around the world,” Kim said. 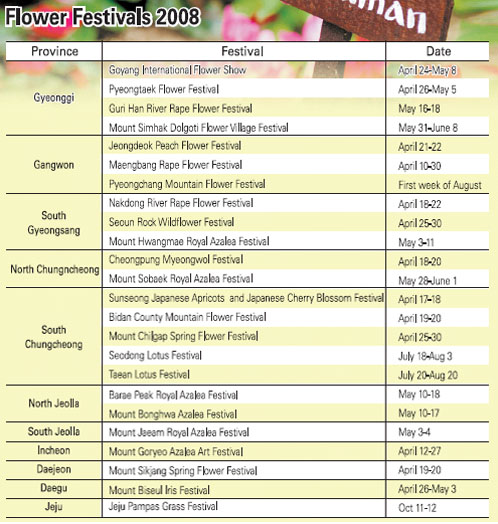