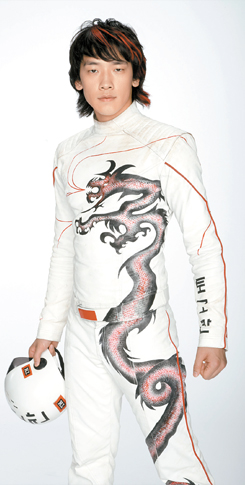 
Pop star Rain has leapt into the Hollywood limelight. He’s been cast in “Speed Racer,” a live action film by the Wachowski brothers, the creators of “The Matrix” (1999).
Speed Racer, which will be released worldwide on May 8, is based on “Mach Go Go Go,” the 1960s Japanese animation series by cartoonist Tatsuo Yoshida.
The main character, Speed Racer (Emile Hirsch), is a veteran motorist whose whole family is involved in the cross-country racing business.
Rain, real name Jeong Ji-hun, plays rookie racer Taejo Togokhan.
“He [Togokhan] has a forceful personality,” Jeong said, noting that Togokhan is cast as the villain because he has such an overpowering urge to win.
The rookie teams up with Speed Racer and Racer X (Matthew Fox) and gives his all to win races for his family’s honor.
“No actor would have turned down this role, especially when the movie is directed by Hollywood directors [Andy and Larry Wachowski],” Jeong said.
He also said that the upcoming film portrays hopes and dreams, feelings and emotions he is experiencing as he embarks upon his Hollywood debut.
As an actor representing Korea, Jeong has tried to think of ways to reveal his nationality in the film.
The production team agreed to support his patriotism, and chose the name of Jeong’s character carefully.
They came up with Taejo Togokhan — Taejo referring to Taejo Wang Geon, the founder of the Goryeo Dynasty.
Jeong’s scenes also feature many Hangul letters, which indirectly introduce Korea and its culture.
“I asked the production crew to portray Hangul characters in the scenes,” Jeong said. “As you will see in the film, Togokhan is written in Hangul. Many Westerners who saw the film said the letters were pretty.”
In the film, Jeong didn’t actually get behind the wheel of a speeding racing car.
Those scenes were shot on a green screen using a three-dimensional video-editing technique.
“It would have been nice to have had the chance to barrel along,” Jeong said.
Jeong was impressed by the advanced equipment and technology that the team worked with.
At times he was acting alone on a blank screen, when he looked at the monitor later, there were buildings and cars in the background.
While filming extra scenes for Speed Racer, the Wachowski brothers asked Jeong to star as the main character in their next project, “Ninja Assassin.”
The directors had just finished planning the film and were closely observing the Korean actor.
“People say luck brings luck but in this case, I’m sure it was my hard work that won me this new role.” 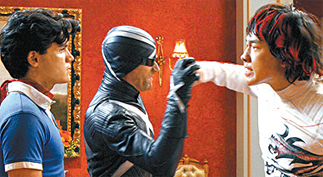 Rain, right, gets a major break in Hollywood with his role in “Speed Racer.” [JoongAng Ilbo]

Currently, Rain is training in Berlin for his Ninja Assassin scenes.
“From 6 in the morning to 5 in the afternoon, I receive hard-core training,” Jeong said.
He works out every day to lose weight and he practices martial arts.
Jeong is not giving up his music for acting, though.
He contributed a song to the original soundtrack for the animated film “Kung Fu Panda” (2008).
DreamWorks invited Jeong to perform on the film as a singer.
He had enjoyed listening to the original song of “Kung Fu Fighting,” so when he was invited by Carl Douglas to take part, he didn’t hesitate.
Jeong never imagined himself working with big Hollywood stars.
“I’m not the guy who thoroughly calculates before planning a career or work,” Jeong said. “If I had calculated, I wouldn’t be who I am at the moment.”
But he is not letting his success go to his head. He knows he has to continue to work hard.
“The key to success is not to stop challenging yourself, try new fields, remain focused and consider what you want,” he said.