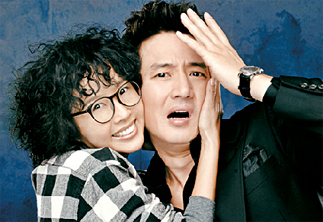 “The Last Scandal of My Life,” a modern-day twist on Cinderella. [MBC-TV]

“I have a dream,” declared one acquaintance at a recent lunch.
Expecting to hear something equal to Martin Luther King Jr.’s epoch-making speech, I took time to enjoy her facial expression, which reminded the listeners of the African-American minister.
“It is to fax my letter of resignation to work after walking down the aisle with Prince Charming,” she said.
Wait. What kind of a dream is that to declare in public?
She’s joking, right?
But she went on, words that trampled all over anything that Simone de Beauvoir and Gloria Steinem ever wrote or stood for.
To be honest, it was even more frustrating because she earns a much better salary than me.
I even lost my appetite for dessert and coffee, which rarely happens.
She started to complain how her company is taking her for granted, but I ceased listening for the sake of my mental health.
Unlike her, I don’t have the money to find a shrink.
To calm my mind and body, I decided to think that she is just another outdated Cinderella hopeful.
Come to think of it, these kind of modern-day Cinderella wannabes are not an endangered species.
On the contrary, they are evolving steadily and have been spotted in the recent TV drama hit, “The Last Scandal of My Life” on MBC-TV.
Airing every weekend at 10 p.m., this TV series presents a 39-year-old, divorced Cinderella called Seon-hee played by once-upon-a-time-hot-celebrity, Choi Jin-sil, who is a naïve housewife.
Her life is dominated by her incompetent husband who always fools around, her mother-in-law who nags her and her teenage daughter who is infatuated with a movie star.
She doesn’t care about herself: She wears her hair in a poodle perm and sports thick glasses.
Then, her husband runs off, leaving debt she cannot handle.
She gets work as a maid at the home of her childhood friend, Jae-min (Jeong Jun-ho).
Jae-min used to have a crush on Seon-hee years ago, but that’s not the case now. He ignores and teases her, but somehow (yes, as the story goes), he develops feelings for her again.
Then, (yes, again, as the story goes), he faces a rival in his love — his own brother, who is gentle, rich and kind.
So this is a love triangle that warped decades ago. Still, it is a selling strategy, as proven in the relatively high audience ratings.
Even I am watching this, if only to criticize.
Although I pray that this drama is the last of its kind, I have to face my own secret wish that Seon-hee eventually gets the happy life with any Prince Charming that she thinks befits her.
Life is hard and the world is rough out there.
Maybe we all need a little comfort, at least at home with our remote controls.
Another reason that this drama is popular is the starring actress, Choi, who came back to TV screen after a failed marriage to a baseball player.
It has somehow become a trend for actresses like Choi to return to the limelight in shows that depict housewives getting back on their feet after a marriage that hits the rocks.
They tend to meet their Prince Charmings, too.
Going back to my Cinderella wannabe acquaintance, I send her my best wishes. After all, we all have different dreams. For Martin Luther King Jr., it was justice for African-Americans, and for my acquaintance, comfort.
Perhaps she is smarter than me, because Simone de Beauvoir, no matter how often I read her books or how much her work affects me, cannot get me a better salary.