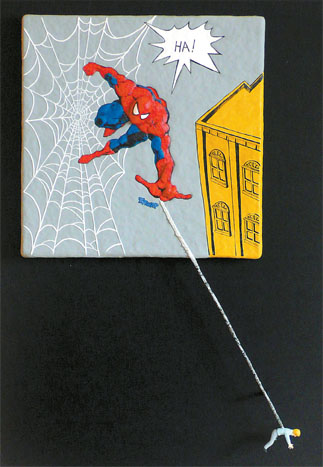 “Spider Man” (2008) by Seo Ji-hyung, a rubber and clay depiction of memory, one of the exhibits at a new show at Hangaram Gallery in Seoul Arts Center called “Crossculture.” Provided by the organizer

Mickey Mouse has grown into a monster.
SpongeBob SquarePants, the square sea sponge that features on the U.S. animation channel Nikolodeon, gets hideous.
Be warned: This exhibition could ruin your childhood memories.
If you visit the upcoming exhibition, “Crossculture,” you might walk away with a very different view of some of the world’s most lovable cartoon characters.
The works on display include paintings, sculptures and video clips that blend images of cartoons with fine arts to create an escape from more conventional art.
“Most of the 26 participating artists don’t see cartoons as simple amusement,” said Hong Jang-mee, the PR manager for the Hangaram Gallery in Seoul Arts Center, southern Seoul, where the show opens next Wednesday.
“Each work is true to nature and critical to reality,” she added.
For example, Woody from the 1995 feature film “Toy Story” pops up in Park Young-gyun’s “Liberty Leading the Cowboy” (2008).
This is in fact a parody of “Liberty Leading the People,” by the French painter Eugène Delacroix.
In Park’s work, Woody is a depicted as a leader who uses violence to fight for freedom and justice.
Snow White, Ariel from “The Little Mermaid” and Jasmine from “Aladdin” appear in Kim Doo-jin’s “Blur Blur Blur” (2004).
They are physically distorted features and are no longer the happy-go-lucky characters from fairy tales.
For example, the characters are painted with only one eye.
The twisted and distorted features invite you to think again about existing values, said Hong.
Park Bok-hee’s “Laud 4” (2008), criticizes today’s capitalistic and authoritarian society.
He depicts Mickey Mouse smiling in front of an industrial complex, where there are apartments and cars.
“The innocent Mickey Mouse is manipulated by the society,” Hong said.
“The work depicts social irrationality,” Hong added.
Hong said the interpretation of the works reflect the social reality today.
“Arts are no longer innately elegant. They now touch upon reality, which the exhibition attempts to do,” Hong said.