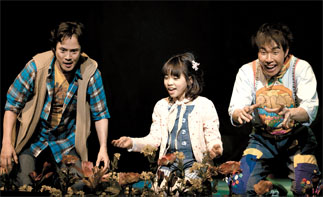 Nam Gyeong-ju (left) plays a singer-songwriter in the new musical “Soridoduk (Sound Thief).” He and his friend Chi-rin (Nah Joon), right, help Achim (Park Do-yeon), center, recover from the shock of losing her dad in a freak stage accident. Provided by Credia

Who’s the best musical actor in Korea?
Nam Gyeong-ju is staking a claim for that title with his latest project, “Soridoduk (Sound Thief).”
Nam plays a talented but as-yet -undiscovered singer-songwriter who helps a young girl recover from the loss of her father.
Achim (Park Do-yeon), whose name means “morning” in Korean, is in shock. She saw her rock-star dad get electrocuted onstage during a gig and die. Since that night, she hasn’t been able to hear or speak.
She and her mother, In-gyeong, move back to her mother’s provincial hometown where they meet the singer-songwriter, Yoo-joon (Nam) and the child-like Chi-rin (Nah Joon).
They become friends and Achim slowly starts to communicate with the villagers through music.
Then something strange happens. Achim begins to heal the wounds of people in the town through her music. Somehow she gains insight into their pain and personal secrets that have lain hidden for many years.
Her singing helps the town’s doctor, Choi, who hasn’t left his house in years. He prescribed the wrong medicine to Chi-rin, drugs that left him mentally underdeveloped. He blames himself for the boy’s mental illness.
Achim also reaches out to her mother, who has refused to sing ever since she saw her husband twang his final chord on stage.
But Achim still suffers from a recurring nightmare. She thinks a “sound thief,” a demon from the sound system that killed her father, will steal her voice.
This musical is based on the 1998 Australian film “Amy,” and Achim is the name of the daughter of the producer of the show, Cho Gwang-hwa, who said he wanted to create a musical for his daughter.
Kim Hye-seong wrote the songs in the production, numbers that are both comical and heartwarming.
This is a fun, original musical about the healing power of music. Nam holds the show together with his strong vocals