Fresh look at the buildings around the capital

Fresh look at the buildings around the capital 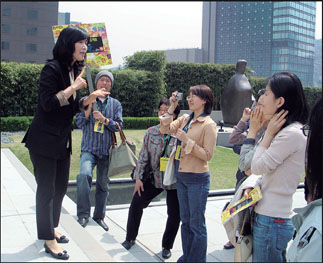 Participants listen to the guide on the walking tour. Provided by the organizer

It’s similar to a treasure hunt, except the treasures are not hidden.
Now in its second year, the “Exploring Seoul’s Art and Culture” walking tours take a fresh look at familiar buildings in Seoul such as the Bank of Korea, Korea Post Office, Shinsegae Department Store, Hongik University area and the streets of Samcheong-dong. The guides are art directors, architecture, literary critics and traditional culture scholars.
“The term ‘public art’ first emerged in Korea during the 1970s,” said art director Yun Tae-geon standing in front of the Korea Post building. He is one of the tour leaders. “Before, buildings were artwork in themselves. After rapid industrialization in the late 20th century reduced their artistic value, the concept of public art surfaced.”
Yun got the idea for his tour from a Chicago tour of public artwork. “People find it cool to unearth new pieces of information about things others probably have no clue about.”
Yun’s tour will run through November. Each day of the week has a different theme, route and schedule. The aim is to reach out to people who don’t have easy access to cultural facilities.
“Korean mothers will go beyond the call of duty to give their kids opportunities, but it is important for mothers to become knowledgeable so they can guide their children in the right direction,” explained Kim Hyun-cha, one of the organizers of the tour.
Kim So-yeong, 41, immerses herself in art and culture while her kids are at school. “I have always been interested in art, but I’ve never had the chance to get professional instruction.”
Expatriates are another target group. Of the 3,350 people from last year’s program (70 tours from March to November), about 260 joined the foreigner-friendly, English-language tours called “Seoul’s Historic Walks” led by the architect Cho In-souk.
Seoul Foundation for Arts and Culture, established by the Seoul metropolitan government, said it secured increased budget for the program this year after its debut last year.
They have increased the number of tours to more than 100 this year and as a result expect to see about 1,000 more people get to know what Seoul has to offer.