Time out among the trees

Time out among the trees 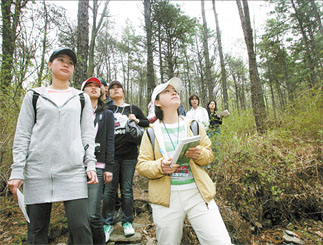 Participants listen to the sounds of the forest on Mount Daemo, southern Seoul, on a Seoul Forest Tour organized by the city government. By Kim Hyon-dong

Hiking isn’t just about tearing through forests and up hills clad in the latest mountaineering gear. A walk should be relaxing.
“Have you heard of ‘lazy’ hiking?” asked Kim Eui-sik, a full-time forest guide, during a walk up Mount Daemo, southern Seoul, last week.
“When you go on a forest tour, take slow breaths and slow steps, look at the skies, look at the ground, taste things and feel the dirt with your bare feet. It doesn’t matter whether you make it to the top or not, or how fast you get there. Just make sure to use all your senses.”
Kim, 59, has been working for the past five years for Seoul Forest Tour, a Seoul metropolitan government initiative to promote the city’s green areas.
Jung Noh-pal, an honorary professor of the College of Life Science and Biotechnology at Yonsei University, shares similar ideas about forest, which is why is was also gearing up for a walk at Mount Daemo, the third meeting of the group this year.
“I’ve been to more than 20 cities around the world, but not many have such easy access to many mountains and forests as Seoul,” Jung said. 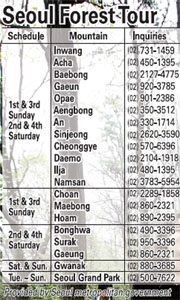 The tours, which are conducted in Korean, allow ramblers to choose from 20 mountains and forests around Seoul. Most run on the weekends through November. Different district offices operate tours to mountains in their respective administrative areas.
During the two-hour “lazy” hike, the participants get more than peace of mind. Most, from the very young to those in their 70s, go home better informed about trees and flowers.
The tour teaches walkers how to differentiate Korean red pine and North American pitch pine by looking at the trees’ needles; that the oldest tree in Korea is about 1,500 years old and is located on Duwibong, Gangwon; and that chewing willow bark soothes toothache.
The participants were also encouraged to dig in the ground to smell fresh soil and sample edible flowers. During a brief break, they got to show off their artistic or literary creativity, too. They were asked to choose a plant or flower and either sketch or write about it.
“To be honest, I thought the tour would be boring,” said Lee Jeong-im, a 24-year-old college student. “But it’s different from a textbook class and it gives a lot of information that can be useful in our daily lives. I got to look at the city that I live in differently.”
Lee’s school, Korea National Open University, allows its students majoring in tourism and education to participate in the program as a substitute for midterm examinations.
Korea’s mountains and forests are living witnesses to history, having lived through the wars and upheavals that have characterized certain eras in Korean history.
There have been additions, too, to the forests, such as the cherry blossom trees that the Japan planted in large quantities during the colonial period (1910-1945).
Much of the Korean countryside was bombed and denuded by the warring armies during the Korean War (1950-1953). During the postwar Saemaeul (New Village) Movement aimed at reviving the Korean economy from the ruins of war, the government planted a lot of chestnut trees. 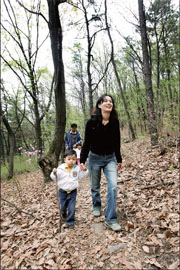 “I hope to pass to my students what I learned from the tour today,” said Kim Yeong-ju, who teaches at Seoul Aewha School, a special educational institution for hearing-impaired students. “I believe it can be a good hands-on educational experience for my students.”
However, despite the high satisfaction and popularity of the tour, organizers have problems maintaining the program because of limited funding.
“A number of organizations like schools and classes want to participate in the tour during the week,” said Ryu Sang-eon, a manager at the Green Seoul Bureau of the Seoul metropolitan government, which finances the program.
“But due to limited resources, we cannot accommodate their demand. Many district offices that run the tour want to expand the program, but we cannot guarantee the budget,” Ryu said.
Despite low budgets, most district offices intend to continue the programs even if they have to use their own resources.
The Gangnam District Office, which operates tours to Mount Daemo, is pouring money into the program.
“Since the city reduced the funds for this year, we decided to earmark our own budget for the tour,” said Kim Seung-hyeon from the office.
The Gangnam District Office has many new ideas to make the tour to Mount Daemo more fun and educational, such as holding classes on natural dyeing, herbal flowerpot making and horticulture.
“Nature doesn’t need humans, but we need nature for survival,” said Jung Noh-pal.
“It is our duty to get close to the mountains and forests around us and get to know them. They are part of our world, part of us.”