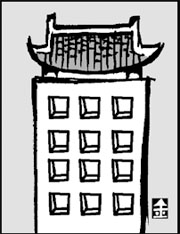 Hallyu, the wave of Korean pop culture that swept through Asia over the past few years, is still strong in China today. But there was a time when the Chinese equivalent to hallyu, known as hwapung, was popular in Korea. This wave included Chinese motifs and cultural influences over artistic areas such as architecture.
Fast forward to today and China plans to build an impressive new embassy in Myeong-dong, downtown Seoul. There will be a 24-story tower and a 10-story building. The planned embassy is controversial because of its shape, now that its design has been made public. The tower will have a very large roof and the overall concept is regarded by some as overly authoritative and has left some people unimpressed.
Public buildings around Tiananmen Square are built in the same style. They are oriented toward the Forbidden City, which used to be the royal seat of Chinese emperors during the Ming and Qing dynasties.
Anyone who has walked around the imperial palace there can imagine the ambience of the past. There are few trees or any other distractions in the imperial glow. The large roofs on top of China’s grand buildings naturally remind us of the king’s majestic aura.
In modern Beijing, big roofs came into vogue in the 1990s. This trend spread to other parts of China. Sometimes, an entire pavilion would stand on top of a building. Such buildings characterize a Chinese sense of majesty and dignity. But at the same time, this overt style of architecture can look awkward.
While we should respect the designs put forward, the Chinese Embassy officials in Seoul should rethink the wall around the embassy. It is very likely that the existing three-meter concrete structure will remain. The city of Seoul believes that a high wall in the heart of Myeong-dong is a problem.
One media organization has suggested that people should be able to see over the wall.
Clearly, the Chinese are concerned about security, but the wall doesn’t need to be this high.
The wall’s thickness and height creates distance between those on one side and those on the other.
The wall will transmit a sense of dignity, but it could also be seen as intrusive and divisive.
We can understand the logic behind the design for a high wall. But in this day and age, it is high time to seek harmony with others and not build walls.
The Chinese Embassy has the chance to embody this spirit in its wall.