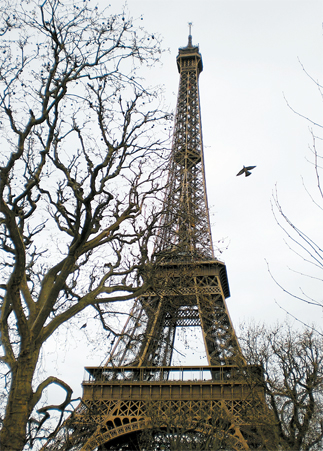 Apart from the Paris Baguette bakeries that line the streets, Seoul has little in common with the French capital. Still, a week before my trip to Paris, I began to sense France was close by.
Days before my flight, I would glimpse down a Seoul side street and see a Parisian alleyway. N Seoul Tower on top of Mount Namsan would morph into the Eiffel Tower behind a veil of smog. And I kept smelling croissants everywhere — mostly thanks to, what else, Paris Baguette.
Paris had been squeezed onto our European itinerary at the last minute, meaning we would only have a single day in the City of Lights. In an indication of just how seriously we were taking this lack of time in which to see everything, my wife, who has never been to Paris before and is rarely seen outside of a pair of high heels, packed walking shoes.
We just missed the debut of Asiana Airlines’ new direct flights to Paris, and were bounced through Frankfurt before arriving jet-lagged at Charles de Gaulle International Airport.
Asiana has elbowed onto this route, exclusive to Korean Air and Air France since 1973.
After an 11-hour flight, the last place you want to be is on the RER on a Friday night. The RER is an extension of the Paris Metro that serves the suburbs and reveals just how urine-soaked some corners of the city’s underground rail system get.
Still, we followed the directions of the grumpy lady at the airport information booth. She told us that the RER was the best option for getting to the city in a way that implied anyone who didn’t know that already was probably very, very stupid.
Still, urine-soaked or not, the train whipped us into town in under an hour and we were soon in the lobby of our hotel in the Saint Germain area on the Left Bank.
The Seine River splits Paris into the Left Bank, the more bohemian neighborhood, and the Right Bank, which boasts the Champs Élysées and the Louvre.
But gone are the days when writers like Ernest Hemingway and Henry Miller would sit scribbling stories in smoky cafes on the Left Bank. The area is now full of luxury boutiques and overpriced restaurants.

Top to bottom: Tourists clamor to snap photos of the Mona Lisa in the Louvre; Les Invalides, which holds the tomb of Napoleon Bonaparte; and people relax at a fountain in the Place de la Concorde, with La Madeleine and the H?el Crillon in the background. By Richard Scott-Ashe

Knowing our time in the city was of the essence, we bundled our exhausted bodies into the nearest cafe — trendy brass artwork, sculpted bar, handsome waiters — and silently consumed a delicious prosciutto salad and two glasses of rosé. After a meaningless argument about who was more tired, we shelled out 65 euros ($103) for the bill as casually as we could, and trudged back to the hotel.
We then proceeded to pass out in our clothes, which worked to our advantage, because when jet lag woke us at 5 the next morning, we were dressed and ready for some high-speed tourism.
We bought a couple of croissants at a boulangerie that seemed to specialize in serving the elderly. They were the only ones apart from us creaking through the doors at that time of day.
We munched our breakfast en route to the Seine. As we crossed Avenue Saint Germain, the waiters in the cafes were wiping down tables and laying out ashtrays for the ancient folk who had just woken up and the young guns who hadn’t yet gone to bed yet. Everyone needed their early morning coffee.
Whether you have a day or a month in Paris, a walking tour is a must. Many of the city’s most famous sites are within easy walk of each other, unless you’re wearing high heels.
The charm of a good walk lies in rooting out streets and neighborhoods that most mainstream tours avoid or don’t know about. As you walk over the cobblestoned roads, past little-known churches and through rarely visited squares, you learn why so many people fall in love with Paris. The city exudes a sense of refined urban living, cultivated over centuries and unparalleled elsewhere.
With this in mind, we found a little cafe by the Seine and settled down for a simple breakfast of lemon crêpes and coffee. After paying over 20 euros for the bill, we realized that urban living as refined as this is absurdly expensive.
Across the Seine lies the Louvre, one of the most famous art museums in the world. Said to be the most visited museum on Earth, the Louvre lured 8.3 million people through its doors in 2006.
We were not the only ones trying to avoid the crowds; the crowds were doing the same. Fighting our way past Japanese, Italian and Chinese tour groups, we quickly took in some of the best-known selections — Leonardo da Vinci’s paintings, including “Madonna of the Rocks,” and that picture of a woman smirking, the Venus de Milo, and a few Jacques-Louis David pieces — sped through the Islamic Art section, snapping photos all the way, and were out the doors again before the noon sun had landed on the Louvre Pyramid.
Properly enjoying the huge museum takes days, but seeing the things necessary to say that you’ve been there can be done in a couple of hours.
Heading up to the Place de la Concorde through the Jardin des Tuileries, we passed under the Luxor obelisk that now stands where the guillotine chopped heads during the French Revolution. We walked through the lobby of the ultra-luxe Hôtel de Crillon and settled for lunch at another of the thousands of overpriced but delicious restaurants near the L’Église de la Madeleine.
We barely had time to scoff down our steak tartar before we were on our feet again, striding along the Champs Élysées. Despite the high-speed schedule, my wife somehow found time to duck into a Chanel boutique. Glancing a price tag of 20,000 euros on a crocodile-skin bag she was admiring, I pressed on her the urgency with which we needed to continue moving.
Washed along by a flood of tourists towards the Arc de Triomphe, we experienced an odd moment of tranquility as we crossed the street. The Champs Élysées runs from the arc to the Palace du Louvre, and if you stand in the middle of the street, you are afforded one of the most stunning architectural views in the Western world.
The light changed, and we ran for the sidewalk. At the Arc de Triomphe, we veered left, toward where the Eiffel Tower pokes above the stately apartment buildings that line the Parisian streets. The walk there didn’t take long, but the wait for the elevator did. Finally at the top, giddy with vertigo, I trained my camera around the heads of a chubby American family, clicked a picture of the view, and we headed back to the elevator.
With extra time on our hands, we headed to Montmartre, the artistic neighborhood to the north that sits in the shadow of the Sacré Coeur Basilica.
Dinner was another expensive but delicious affair. We sat in a square next to the cathedral and ordered the most French items on the menu — frogs’ legs and onion soup.
At this point, the jet lag was beginning to overpower us. My wife had even quit trying to drag me into anymore stores.
We hopped in a taxi, had another quick meaningless argument, this time about who had eaten the most delicious food, and headed back to the hotel past Les Invalides cathedral, where Napoleon Bonaparte is interred.
Promising ourselves we would check out the nightlife after a quick nap, we lay down our heads and woke up at five the next morning, just in time to head to the airport.