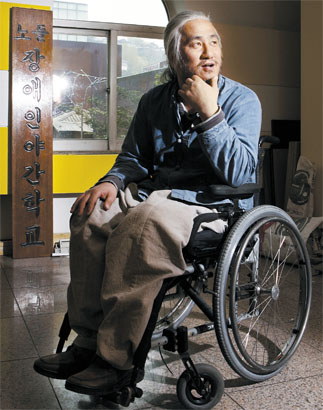 Park Gyeong-sung, principal of the night school Nodl and a disability rights activist, has been urging others to fight prejudice and discrimination.By Ahn Yoon-soo

Park Gyeong-sung, 54, lives in two worlds: one of discrimination, and one of empathy.
He’s faced the worst that society can throw at him — problems finding work, feeling isolated, feeling useless — but he’s also met people who are willing to change and who are willing to change society.
A hang gliding accident in 1983 left Park paralyzed from the waist down, and since then he has been wheelchair bound.
Over the past two decades he has become a champion for disability rights, educating the general public about disability awareness and encouraging people with disabilities to fight for their rights.
“Korea is a conservative country where being disabled is practically a sin and a source of shame,” Park said. “Some areas of society still stubbornly refuse to accept people like me because I am in a wheelchair.” 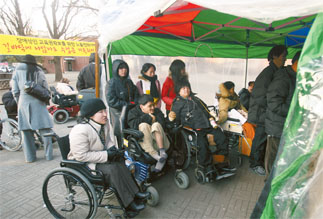 Students from Nodl Night School take classes outdoors in Daehangno earlier this year after they lost their facility, which they had used for 15 years. Landlords were reluctant to offer them a new location for various discriminatory reasons. [JoongAng Ilbo]

However, he admits that Korea has take some major strides in creating more equality, though the pace of change is not as fast as he would like.
This is why he is skeptical about Disability Awareness Day, which falls tomorrow.
“It’s just a show,” he said.
In 1981, former President Chun Doo Hwan designated April 20 the day to consider the rights and lives of people with physical disabilities or learning difficulties.
According to the Ministry for Health, Welfare and Family Affairs as of March 2007, there were two million people living in Korea with either physical or mental disabilities.
Park asks, though, how much people’s attitudes and perceptions of people with disabilities have changed since this day was designated.
“It’s like getting a pat on the back to say, ‘Yes, we know you exist,’” he added.
However, he is more positive about one event taking place this year, which he thinks can make a difference.
As of April 11, 2008, a law that prevents discrimination against people with disabilities both physical and mental has been put into practice.
The law will punish anyone who discriminates in matters concerning recruitment, promotion or retirement, or who denies people with disabilities places in school.
Korea is the second country in Asia to implement such a law. Hong Kong’s Disability Discrimination Ordinance has been in effect since 1996.
People who refuse to comply with the law in Korea can be fined up to 30 million won or jailed for up to 3 years.
Park said this law may not initiate huge changes or rapidly transform people’s lives, but it will support people’s rights.
This is not the first time Korea has tried to fight this kind of discrimination. Attempts have been made in the past to tackle prejudice in the workplace.
Since 1990, companies with more than 300 employees have been required by law to ensure that 2 percent of its staff comprise people with disabilities. In 2004, this law was expanded to operations employing more than 50 employees.
The law is having limited effect. Companies are hiring people with disabilities, but only a quarter of companies are complying.
The most recent study by the Ministry of Labor, in 2006, shows that as of the end of that year there were over 67,000 people with disabilities hired at private companies and government-funded corporations of more than 50 employees. This is a very low figure considering there are over 2 million people with disabilities in this country. 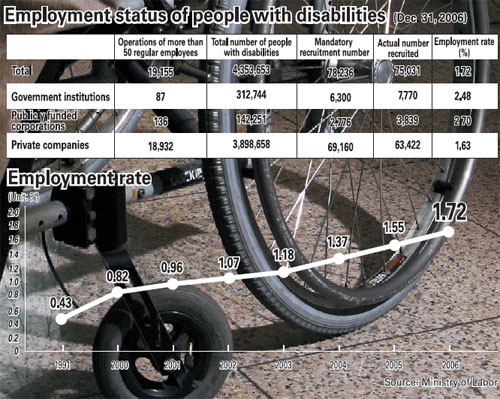 Although new recruitment jumped 22 percent from 2005 to 2006, less than a quarter of the 19,068 operations in Korea required to hire employees with disabilities observed the law.
It was a marginal success, with a 2.9 percent increase compared to the previous year, 2005.
Even worse was that most of the hirings were made by small operations of less than 300 employees.
Only 563 companies with more than 300 employees complied with the law, compared to 3,943 operations with less than 300 staff that complied.
Getting a job is just half the trouble, though. The study showed that 23 percent of the 63,000 hired worked in simple labor jobs, like on factory production lines, rather than jobs that are intellectually demanding. Only 1.7 percent, or 1,069 people, were high-level officials or in management.
“Companies don’t like to hire people with disabilities because they believe that there’s more loss than gain,” said Park.
“Not only do companies have to make large investments in changing the entire infrastructure, such as installing a toilet that accommodates people with disabilities, but they also believe that employees with disabilities are unproductive.”
Park said he tried to find a job, once.
After his hang gliding injury, Park said he isolated himself at home for five years. To make a living, he studied computers for a year on a program at a state-run institution for people with disabilities.
“Finding a job back then, before the mandatory recruitment law was put into action, was like looking for a needle in a haystack,” said Park. “A classmate of mine with high scores ended up working in a factory despite his computer skills. There was hardly any hope.”
Learning that few companies were willing to recruit someone in a wheel- chair, Park studied social welfare at Soongsil University. After four years of study, he tried the job market again. He was 34 and it was 1988.
Park applied to several institutions that work for people with disabilities, but he was rejected, not because of his physical condition, but because of his age.
“At least I got seen,” said Park. “In other fields, it was almost impossible get to the interview stage.”
He had to do something, so he studied for his master’s at the same university in the same subject, and later worked with different organizations for people with disabilities.
Since then, he has been giving talks to people with disabilities at a night school. He knows that without education, it is impossible to face the world.
In 1998, he became the principal of the Nodl Night School, a place only for people with disabilities.
His wish now is to see more companies comply with the law concerning the workplace.
“It would make people more secure if companies with over 300 employees hired people with disabilities,” said Cho Jong-ran from the Korea Employment Promotion Agency.
“However, although the number of people with disabilities getting recruited at big operations has been going up, major businesses are still reluctant to hire because of prejudice and misconceptions,” Cho added.
“The biggest problem is that there are companies that don’t even try to hire people with disabilities.”
Ha Sang-woo, head of the employment policy team at the Korea Employers Federation, said major corporations are reluctant to hire because other employees don’t feel comfortable working alongside people with disabilities.
“Many companies would rather pay the fine than try to meet the target of 2 percent mandatory recruitment of people with disabilities,” said Ha.
He added that the new antidiscrimination law will further freeze the already miniscule hirings.
“Strong regulations will probably make companies less enthusiastic about the law, because companies have to be more sensitive, and it might be easy to misinterpret an action as discrimination. Who wants to bother with all that?”
Park says his mission now is to educate others like him for the real world. The Labor Ministry’s study shows that only 370 of the 2,159 high schools in Korea have special classes for people with disabilities.
Adults with disabilities, who aren’t educated, account for almost 50 percent of the total population of people with disabilities.
“If you know more, you can protect yourself against discrimination,” said Park.
However, running a night school of 40 students isn’t easy.
Nodl is funded by donations and earlier this year, after being moved from a welfare facility that they had used as a school for 15 years, classes have been held in a tent in a park in Daehangno, Seoul since January.
Park and his students have found a building owner in Daehangno who has agreed to rent his place to the school. The first class started on Tuesday.
“We were lucky,” said Park. “For people with our conditions, it is not easy finding office space,” said Park. “I had to face discrimination when finding my own apartment. The home owner didn’t want to go through with the contract after learning I was disabled,” said Park. “Some said outright that I would bring down the value of the real estate.”
Park believes that people with disabilities should mingle as much as possible with people who are able-bodied.
“This will help those who are not disabled to have a better understanding of us as people,” said Park. “It’s not right to place people with disabilities in an isolated institution. The scenery is nice and the environment clean and healthy at such institutions, but they are away from mainstream society.
“There should be no walls between us and no need for Disability Awareness Days.”