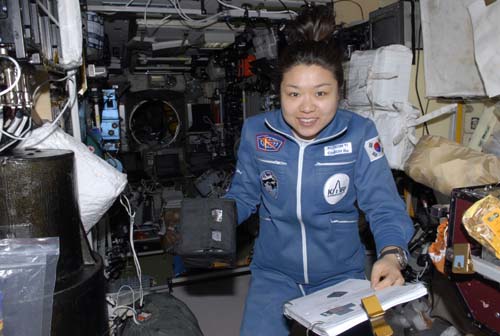 Astronaut Yi So-yeon conducts an experiment on seed germination aboard the International Space Station. Yi’s experiments carried out in space are part of “investigation technology.” [YONHAP]

In Antoine de Saint Exupéry’s novel “The Little Prince,” the eponymous hero lives on a tiny planet called B612. On B612, which is more an asteroid than a planet like Earth, the Little Prince tends his home’s three volcanoes and a single rose. He dutifully waters the rose and cleans the volcanoes. He also uproots baobab trees from B612’s soil; if he allows them to grow, they’ll turn his planet into dust.
Then one day, the Little Prince leaves B612.
People longed to learn more about the universe well before Saint-Exupéry began to depict it in The Little Prince.
There are three space technologies we’ve harnessed to make our dreams of exploring the universe come true: satellites, rockets and “investigation technology.”
Satellites are space devices that we shoot up to circle Earth. Of these, those that fly in the universe are called spacecraft. Satellites rotate using the balance between the universe’s gravity and the centrifugal force created by their rotation.
A satellite in low orbit at an altitude of below 1,500 kilometers (930 miles) is drawn by gravity because of its proximity to Earth. To overcome gravity and maintain altitude, a large centrifugal force is necessary. The International Space Station, at an altitude of about 350 kilometers, is a satellite in low orbit.
On the other hand, a satellite in high orbit, at an altitude of over 35,000 kilometers, is drawn by low gravity that does not require great centrifugal force. It rotates slowly according to the Earth’s electromagnetism. If we viewed a high-orbit satellite from Earth, it would look static. Therefore, these types of satellites are called static orbiting satellites. A broadcasting satellite like the Mugunghwa, which must continuously beam to one place, must be a static orbiting satellite.
Satellite technology that has already matured so is now an indispensable part of our lives. Meteorological observation, resource observation and GPS are all benefits related to satellites. South Korea’s first satellite, Our Star One, launched in 1992, marking the beginning of the country’s satellite technology research. We’ve since developed Our Star Two and Our Star Three in addition to Science Technology Satellite One and shot into space Arirang One and Two, observing all corners of the Earth. Currently, the Korea Advanced Institute of Science and Technology and the Korea Aerospace Research Institute are producing Science Technology Satellite Two and Arirang Three.
Then there’s rocket technology. A rocket that carries satellites into orbit uses Newton’s Third Law of Motion: For every action in nature there is an equal and opposite reaction. If we burn fuel and produce exhaust, as an opposite reaction, rockets shoot up. Here, other than the propulsion technology, we need induction control technology that controls the rocket’s flight path.
South Korea is developing the KSLV-I rocket with the aim of launching it in December. It will be the first rocket to be launched from the Naro Space Center in Goheung County, South Jeolla. Scientists plan for the rocket to carry the Science Technology Two satellite. When this occurs, South Korea will finally have developed its own satellite and launch technology.
The third space technology is investigation technology. This term refers to the satellite technology used to observe the Earth and investigate asteroids. High-capacity cameras and digital technology are important in meteorology and observing the sea. Such technology includes the Hubble Space Telescope, which provides the capacity to make observations to explore the moon and Mars. Astronauts aboard the International Space Station carry out scientific experiments while in space.
All the experiments astronaut Yi So-yeon carried out in space at zero gravity were part of investigation technology.
Today, our Little Prince from space returns. We should ask how the rose and the baobab trees are growing on B612.
When the day comes for Koreans to go into space aboard our own spacecraft propelled by our own rocket to conduct experiments, I would like to visit B612. I will help the Prince uproot baobab trees and water the rose.
Dreams do come true. But to realize our dream we must develop our own technology.

*The writer is professor emeritus of future industry in the Bio and Brain Engineering Department at KAIST.