Gunshots heard around the peninsula

Gunshots heard around the peninsula 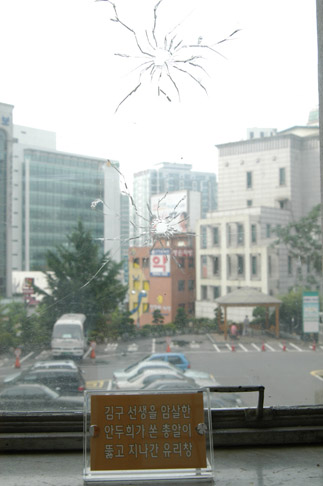 A replica of a window hit by a bullet from the gun of the assassin Ahn Doo-hui on the second floor window of Gyonggyojang. [JoongAng Ilbo]

Kim Koo, the sixth and last head of Korea’s provisional government during Japan’s colonial occupation (1910-1945), had one desire in life.
“If God asked me what my wish was, I would unhesitatingly say, Korea’s independence,” Kim wrote in his autobiography, “Baekbeomilji,” which was published in 1947.
Baekbeom was Kim’s pen name and ilji means diary in Korean.
But Kim went further. “If He asked me about my second wish, I would answer again, our nation’s independence. If He asked me the same question a third time, I would loudly answer, our nation’s complete independence.”
Kim is still revered among Koreans for his actions leading up to Korea’s eventual independence, and no place in Seoul is more imbued with his spirit that Gyonggyojang, a 70-year-old building in Jongno, central Seoul. 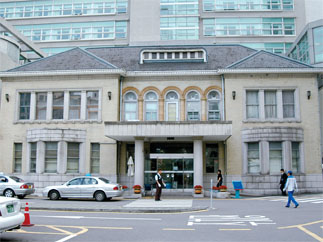 This historic site was Kim’s residence from 1945 to 1949. The building is now a part of the Kangbuk Samsung Medical Center — although a small area on the second floor of the main hospital building was restored as a memorial hall.
“Kim reflects Korea’s contemporary history,” said Ahn Hyeon-mi, the guide at the memorial hall.
Kim was active throughout Korea’s independence movement, which started right after the Eulsa Protectorate Treaty was signed between Japan and Korea in 1905. The treaty stripped Korea of all its diplomatic rights.
The activist was also a member of Sinminhoe (The New People’s Association), a secret and nonviolent independence group founded by independence leader Ahn Chang-ho.
While Kim was protesting for liberation, he was arrested several times by the Japanese and sent to jail.
His first imprisonment was in 1895 when Queen Min, King Gojong’s wife, was assassinated by Japanese agents.
Kim sought revenge — he assassinated Josuke Tsuchida, who he thought was involved in murdering Queen Min. The incident earned him four years in jail.
He was also imprisoned in 1910 as an accessory in the assassination of Terauchi Masatake, the Japanese governor at the time. Ahn Myung-geun, a fellow independence activist, originally plotted the killing. Kim was Ahn’s friend and was also a suspect, getting him three more years in jail.
Soon after the March 1 Movement in 1919, Kim was exiled to Shanghai, where he joined the provisional government of the Republic of Korea. Other members included Yoon Bong-gil and Lee Bong-chang. Kim served for several terms as president.
When Kim returned to Seoul after the nation’s liberation in 1945, he lived in Gyonggyojang.
He had been away for 27 years.
“He [Kim] did not cease to fight for Korea’s complete freedom and also unification,” Ahn explained, according to her research and studies.
He constantly carried out movements that went against the United States and the Soviet Union, with the goal of protecting the nation. 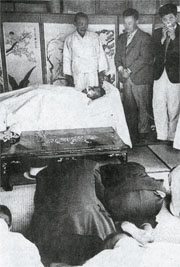 Kim also opposed South Korea’s general election because North Korea was excluded.
“But in the course of his activities for the unification of the South and North, he was killed one summer afternoon in 1949 by the powers against Kim’s activities,” Ahn said, pointing out the actual spot that Ahn Doo-hui, then a second lieutenant, killed Kim who was sitting at a desk at his office on the second floor of Gyonggyojang.
“Little has been preserved and restored,” Ahn said bitterly.
“The spot is beyond simple architecture — it’s in-depth history. It’s where Kim and his supporters planned unification.”
Gyonggyojang, now used mostly as a hospital, was built in 1938. It was privately owned and built by Choi Chang-hak, a gold mine plutocrat.
The three-story building was designed by Kim Sae-yeon (1897-1975), a Korean architect in charge of building most of the government buildings during that time. The architect, considered a pioneer in modern Korean architecture, graduated from Kyungsung College of Engineering.
When Baekbeom and other provisional government members arrived in Seoul from Shanghai, the Seoul reception committee asked Choi to put his property on lease as a spot for the independence leaders to reside. Choi agreed.
“Gyonggyojang’s outer wall is built with granite tiles,” Ahn explained. “It was well built.”
The original site had a reception room, balcony, billiard room, dining hall, barber shop, library and bathtubs. The residence also had a hot-water heating system, which was considered as luxury at that time.
Today, all that is gone — only a partial area has been restored.
Gyonggyojang was used for many different functions over the year before it became a part of Kangbuk Samsung Medical Center.
It was once the Embassy of the Republic of China (present-day Taiwan), the quarters of the Korean medical corps during the Korean War and the residence of the Vietnamese ambassador.
“Currently, the memorial hall is located next to a surgical ward,” Ahn explained.
In 1967, when the ownership went to Samsung Life Insurance Company, the back walls of Gyonggyojang were pulled down and an eight-story hospital, Goryo Hospital, was built (the present-day Kangbuk Samsung Medical Center).
“Though the spot remains, there are hardly any traces of Baekbeom,” Ahn said.
“The historic site is overlooked by many Koreans,” she added.
When you enter the small memorial hall there is a display of Kim’s office, his couch, framed pictures of his wife and mother and a statue. 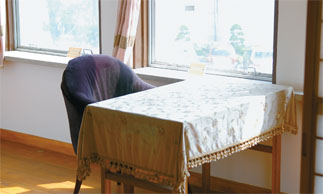 The desk where Kim was sitting when he was shot by Ahn Doo-hui. [JoongAng Ilbo]

The most eye-catching site is a broken window, restored to mark the spot where Ahn Doo-hui shot Kim.
The tragic story took place on a summer afternoon — it was just a few minutes past 11 a.m. when Ahn entered Gyonggyojang.
Since he had previously made several trips to Gyonggyojang, Seon Woo-jin, then Kim’s personal secretary, led Ahn upstairs. Seon then went back downstairs.
Less than 10 minutes later, gunshots rang out. The police and the secretary dashed upstairs to find Kim shot four times, in his right lung, left thigh, neck and mouth.
Kim was 74.
The funeral ceremony was held the following July at Seoul Stadium near Dongdaemun gate, and he was buried in Hyochang Park in Yongsan, central Seoul.
“As you can see in the picture, the crowd numbered nearly 500,000,” Ahn noted, pointing at a black-and-white photo displayed in the hall.
Rumors abound that officials from the Syngman Rhee government, pro-Japanese groups and anti-unification groups were involved in the assassination.
“Though a tragic death, Kim’s patriotic spirit still survives,” Ahn said.
Last week, the Seoul city government announced plans to restore six government-based historic sites, including Gyonggyojang, Ewhajang (the residence of former President Syngman Rhee in Jongno), the residence of former President Yoon Bo-seon in Anguk-dong and the residence of the late President Park Chung Hee in Sindang-dong, all in central Seoul.
The restoration project will commemorate the 60th anniversary of Korea’s establishment, which falls on Aug. 15.
“Each of the historic residences represents Korea’s contemporary and modern political developments,” said Kim Soo-jeong, an official at the Seoul City Culture Department.
“The restoration project should have started earlier but partially due to internal political and ideology conflicts, the sites including Gyonggyojang have been delayed for a long time,” the official said.
According to Ahn, the memorial hall guide, Kangbuk Samsung Medical Center is worried that the restoration work will disturb the surgery sector, located just across from the memorial hall. The emergency room is also nearby.
“We [Seoul city government] are aware of confronting difficulties of restoring the historic site since we don’t own it,” said Kim from the Cultural Department. “But it’s most important to preserve the remnants of the independent spirit from back then.”