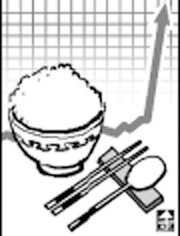 Golden-eared rice plants are generally known to produce white rice, while wild rice has blackish-red ears producing red or black rice. Some rice plants have husks with a pair of sharp long mustache-like appendages as protection against birds.
The wild rice seed is difficult to obtain in Korea and 10 times more expensive than other rice seeds. Weeds around wild rice should be rooted out by hand one by one, also requiring the leaves to be cut down one or two times. Wild rice yields no more than 20 percent of the usual rice production per unit area. When we process white rice, it is necessary to use professional polishing technology. On the other hand, wild rice contains a larger percentage of tannin sand minerals, and has a fine scent.
Wild rice, once considered to be close extinct, now feeds 3 billion people, half the world’s population, as their principal food. It is a remarkable result that people have achieved, drawing on human wisdom and choice. Humans of the Bronze Age paid attention to gold-colored rice, which was thought as a mutation derived from blackish-red wild rice.
Wild rice seeds were found in a prehistoric cave in China’s Hunan Province dating 11,000 years ago; humans have only a 2 million-year history.
Originally, rice had a recessive character, which was likely easily weeded out due to its recessive genes. However, people thought the gold-colored rice was easy to pound due to its thin husk and could be stored for a long time. If water is provided in an appropriate way, a rice farm will have a much bigger and more stable yield. “Yellow rice-white rice” has since spread throughout the world, heralding the age of green revolutions.
This year, there is something uncommon about rice. The international prices of rice have gone up rapidly, three times more expensive than usual.
We already had precious rice here, after the “barley hill” (the lean months before harvest) disappeared with the advent of high-yield “unification rice” in 1970. As rice production decreased by 3 percent in 1972, the price made a quantum leap by 367 percent. It shows that rice is a precious commodity for all of us.
World organizations warned that millions of the world’s population will suffer from global food shortages. Choe Si-hyong, the second leader of the Korean Tonghak religion, said, “You are my precious rice/ you are heaven/ and rice is heaven.” The poet Kim Ji-ha sang in his poem “Rice is the Sky”: “As we can not have the sky alone/ rice is something all of us need to share.”
Can we not all share rice together?