[TALK OF THE TOWN]Blunt songs won’t tank in Korea

[TALK OF THE TOWN]Blunt songs won’t tank in Korea 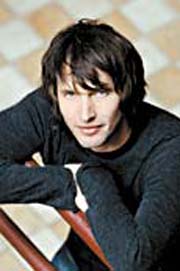 British singer-song writer James Blunt, 34, is coming to town.
To enjoy his acoustic sound, visit the Olympic Hall in Olympic Park, southern Seoul, this Saturday — it’s Blunt’s first concert in Korea.
The musician is well known for his debut single, “You’re Beautiful,” which reached No. 1 on the Billboard pop single charts. The song was used as the sound track of an automobile commercial in Korea.
Blunt started writing songs when he was a soldier in the British Army serving in Kosovo. He kept his guitar in his tank, apparently.
At the upcoming Seoul concert, Blunt will sing hit songs like “High,” “Wisemen” and “So Long Jimmy.”
The Korean rock trio “My Aunt Mary” will open the concert.
For more information, call (02) 563-0595.

Korean-speaking J-pop star is given
his presidential orders
During President Lee Myung-bak’s visit to Japan this weekend, he met Tsuyoshi Kusanagi, a 33-year-old member of the Japanese pop group, SMAP.
Lee inaugurated Kusanagi as a Korea-Japan culture ambassador.
According to Tuesday’s Sankei Sports, a Japanese-language sports newspaper, the Korean president appeared on TBS TV’s “NEWS23SP” and met with 100 Japanese. Kusanagi was one of the crowd.
Kusanagi asked Lee about his 38 years of marriage, and Lee replied that he gives roses to the first lady every year on their wedding anniversary, which falls on Dec. 19.
Kusanagi started studying Korean after he saw the film “Swiri” in 1999. Currently, he’s taken the lead role in a Japanese TV drama based on the Korean movie “My Sassy Girl.” 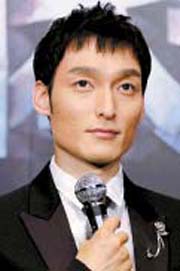 ‘Laundry Warrior’ prepares to cleanup in U.S. theaters
The Korean fantasy film “Laundry Warrior” will be released at more cinemas in the United States than Shim Hyung-rae’s “D-War,” which opened in more than 2,000 theatres there.
The 46 billion won ($46 million) movie, directed by Sngmoo Lee and produced by Barrie Osborne of “Lord of the Rings” fame, features Jang Dong-gun, Geoffrey Rush and Kate Bosworth.
According to Star M, Jang’s entertainment company, the film will be released at the end of this year in the United States.
The company is currently looking for a distributor.
Continental Entertainment Capital, a subsidiary of Citigroup, directly invested on the film.
By Lee Eun-joo