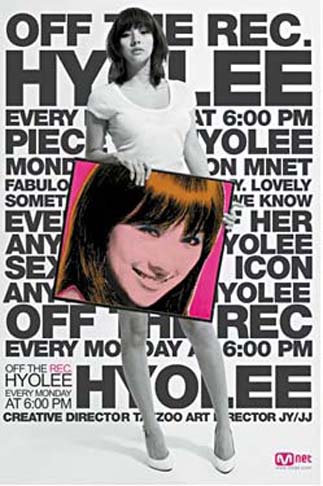 A poster of music cable channel MNet’s “Off the Record, Hyo-lee,” which airs Saturdays at 10 p.m. [MNet]

Working in a newsroom with television news always on, a time like last week was no picnic, with repeated scenes showing how the first Korean in space brushes her teeth and eats her kimchi.
After listening to the steady stream of anchors on SBS-TV — which partly paid for the astronomically expensive trip — proudly explaining every detail, I turned from admirer to skeptic.
“What’s the big fuss about a package tour into space,” I said, to the disapproval of my friends.
They were heartily excited about this astro-adventure.
Anyhow, it’s great to hear that Yi So-yeon is safely back on terra firma.
Now she can brush her teeth like me and evacuate her bowels with two feet planted on ground.
So I am finally free of all that astronaut ado, that lasted 10 days and cost 26 billion won ($26 million). Congratulations to both of us.
I decided to celebrate my freedom over the weekend with some old-fashioned channel surfing, without fear of stumbling upon another “This is how I eat my kimchi” discourse.
Instead, I ran into a seemingly real reality show that shows how the celebrity Lee Hyo-lee spends her 24 hours on the show “Off the Record, Hyo-lee,” which airs Saturdays at 10 p.m. with regular reruns on MNet, the music cable channel.
There I faced scenes showing how this celebrity eats her cornflakes without milk and gets her face massaged.
Lee, a singer better known for her voluptuous body, is one of the brightest stars in the Korean entertainment scene.
If you need further information about Lee, you must be a newcomer to this country. She has cultivated a mysterious persona in the media while raking in cash from commercials.
Lee started to regard herself as an enemy of the mass media and came up with this opportunity to speak for herself in the show Off the Record.
The premise is that viewers are finally getting a peep into the reality of this celebrity’s life.
There are hidden cameras in every nook and cranny of Lee’s apartment, and the producers even get into her bedroom in the morning when Lee is still half-asleep sans makeup.
This voyeurism comes in a package called a reality show. However, real is not real in this program. Lee is constructing what should be real in her life and showing only what she wants her viewers to see.
The directors of the show are 100 percent on Lee’s side, as they appreciate the chance to be the exclusive interviewer of this mega-celebrity.
In recent episodes, which I frankly enjoyed for my own voyeurism, Lee took the film crew to a physical check-up session after a fender bender. Then she started to cleverly make the most of the camera, as she chatted with her physician, who was visibly excited to be with her, and tried to obliterate rumors that she had undergone breast-enhancement surgery to make her cup size more full.
“You cannot do this, if you had surgery, right. Right?” she repeatedly cried out, while getting herself checked for breast cancer.
When the doctor put an endoscope into her throat, which the camera magnified, I hit my limit and called it quits.
I mean, I already have more than my share of troubles in my own reality. I’ve really got no time to care about Lee’s breasts or the inside of her gullet.
Oh my God, my television set right next to me is now offering up more SBS-TV in-depth coverage about the trip into space. And now Lee’s dancing in a soju commercial.
Maybe I should take a trip in a spaceship just to get away from programs about spaceships and reality TV shows.