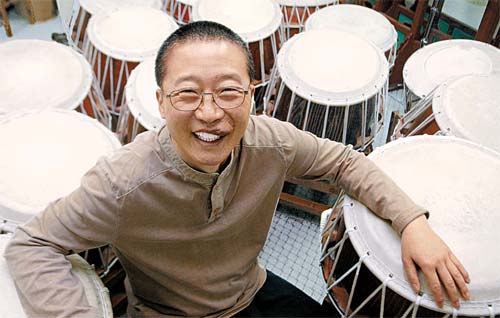 Moon Gap-hyun with his traditional Korean drums. By Yang Young-seok

The house lights went down and silence engulfed the 500-strong audience. For what seemed like an eternity, there was no sound at all in Webster Hall, one of the top places to party in Manhattan’s East Village.
Then the drumming began, waves of sound flowing through the hall, transfixing everyone there.
The drums were soon accompanied by the melancholic sound of the geomungo and gayageum, two traditional Korean stringed instruments. Other instruments includes taepyeongso, a traditional Korean oboe, and the kkwaenggwari, a small gong that makes a strong and sharp sound.
The crowds were gathered to hear Dulsori, a Korean musical performance group that is relatively unknown in Korea but has earned a reputation overseas for its dynamic brand of percussion-driven traditional music.
“If you go out into the world, you won’t find too many people who are familiar with traditional Korean music,” says Hwang Ji-yeon, who organizes the group’s international schedule. 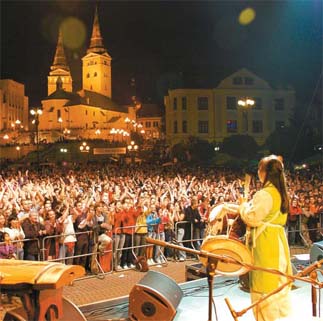 Dulsori performance at the Zilina Festival in Slovakia in front of a crowd of 5,000 in May last year.

“In the past, Korean artists have tried hard to spread traditional Korean music overseas by performing in a traditional way, the way the music was handed down to them,” said Hwang. “But Dulsori has taken the enterprise one stage further by taking a nontraditional step.”
As New York Times reviewer Jon Pareles commented, the show was imbued with the rhythms of rural life but the group had “modern show-business touches, too. Its singer cued audience participation like pop stars, gesturing with wireless microphones. At one point the melody on a double-reed instrument turned into the ‘Olé, Olé’ sports cheer.”
Dulsori, which means wildflower in Korean, tries to connect with audiences around the world by attending world music festivals such as the World of Music, Arts and Dance festival, better known as Womad, according to Hwang.
The New York performance was an opening for Globalfest, an international arts festival.
Dulsori was the first Asian troupe ever to be invited to this festival.
Their efforts in New York paid off. “After the performance, Bill Bragin, programming director of New York’s Lincoln Center, came to us and asked if we could participate at the Out of Doors Festival at the center in August later this year,” said Moon Gap-hyun, the creative director of Dulsori. “Soon we got invitations from cities across North and South America,” Moon added.
He said the New York performance has given Dulsori, which mainly performs in Europe, the opportunity to spread its wings.
Starting last Friday when the team showcased its work at the Asian Cultural Festival in New York, the players will take to the stage in other parts of the United States and in Mexico through May. From mid-May, they will tour Italy, England and Spain.
Then they’re back in New York in August, Venezuela in September, Colombia in October, Canada in November and in the United Arab Emirates in December.
Their schedule is as frenetic as their drumming.
A key part of their itinerary will be Womad, which has won artists such as Mariza Reis Nunes, who sings fado, a type of Portuguese folk music, and Grammy Award winner Youssou N’Dour from Senegal international fame.
Dulsori will perform at Womad in July at Charlton Park in Wiltshire, England.
So what’s the secret to their international success?
Perhaps Moon is the vital cog. He is in effect the de facto creative brain behind the group’s success. Moon conjures up new ideas and concepts, hones them and orchestrates the performers on stage. And, most importantly, Moon seems to know how to market his music in such a way that people from outside Korea can appreciate it.
Hence the slew of invitations to music festivals around the world.
Moon’s first traditional music group was Mulnori, which he ran in Jinju, South Gyeongsang, in 1984. 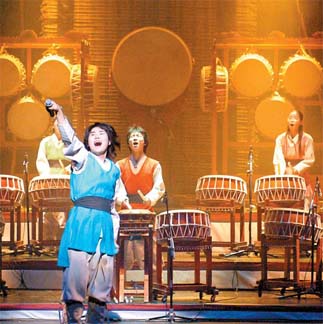 Dulsori performs at the National Theater of Korea in 2007. [JoongAng Ilbo]

“As a student at Gyeongsang National University majoring in agricultural studies, I joined a traditional mask dancing community on campus,” Moon said.
After completing his mandatory military service, he wanted to spend time on Korean musical performance. So he quit school and organized Mulnori with three friends from the same college.
The team started to get recognition after their debut performance called “Jinyang Salpuli” in November 1984. However, the team didn’t last long, as artistic differences led to clashes between members.
The band broke up and Moon started a new troupe called Ulrimteo in 1988. Three years later, they changed their name to Dulsori.
Moon got married in November 1990 and purchased a small theater in Jinju with the 5 million won ($5,014)in gifts that he collected from his wedding guests.
Dulsori started to expand, making connections with well-known performers in Korea.
Dulsori took its sound to a larger stage when the group performed at international festivals in Greece, Israel and Poland in 1993.
However, Moon is a perfectionist and he was looking for something better, a kind of music and performance that was original and dynamic.
He moved his operation to Seoul in 1999 and started to work on his new project. It wasn’t easy for a stranger in Seoul. Despite his reputation in Jinju and fans he had won overseas, Seoul was a harsh environment for newcomers.
He said during this time he felt like he was on a desert island.
But he was undeterred. He finally came up with a rough idea of what his next performance would be.
“I immediately went to work,” said Moon. “Experience had taught me that it would be best to increase the energy of the drums to create a more exciting drama,” said Moon. “Additionally the performance would have to break down the barrier between the performers and the audience, and mix everyone into one.”
But completing the performance wasn’t as easy as Moon and his fellow musicians imagined. It took seven months for the team’s major performance piece, “Tao,” to come to light, which was in late 2001.
Tao, which means a road in Chinese, is a work that brings together the traditional and modern.
Introduced in 2003, it succeeded in winning a wider audience when it was performed at the Seoul Arts Center in 2004.
Tao then made a successful international debut at the Singapore Arts Festival in June 2004. That same year Tao appeared on stages at art festivals in Hong Kong, New Zealand and the Netherlands.
Dulsori was invited to Womad in Australia in 2005 where it caught the attention of the festival’s co-founder, Thomas Brooman, who invited the team to Womad in England in July that same year.
In 2006, Dulsori came up with “World Beat Binari,” an upgraded version of Tao, which was performed at Womad in Singapore, Korea, Spain and England between 2006 and 2007.
“The strong point of our performance is the dynamic mobility that is very Korean,” said Moon. “Yet it continuously changes.”
The performance group that began in a small town in South Gyeongsang has become an international operation.
Last year the group raked in 200 million won ($200, 601). Dulsori opened a branch office in London in 2006 and opened another in New York this year.
Dulsori is planning several exchanges with other world music groups this year. In September, the team will perform with a French team, Lozo.
Moon’s plan is to open up theaters in Seoul and the United States within the next five years for the exclusive use of Dulsori performances.
“People around me tell me that I have succeeded but still there’s a long way to go,” said Moon.
“I’ve only accomplished 1 percent of the possibility that is out there.”