Going up in smoke

Going up in smoke 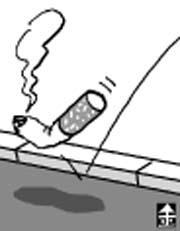 Tobacco came to Korea with the 1592 Japanese invasion. In just 20 years, tobacco spread through the entire country, much more rapidly than cotton, which came from China and took 100 years to become widespread in Korea. Jang Yu, an official in the council of state during the reign of King Injo, smoked even in the royal audience hall.
In his book, “Gyegok Manpil (Errant Writings at the Valley)”, published in 1635, Jang wrote: “In Korea, people first smoked tobacco 20 years ago but now everybody, from high officials to errand boys, smokes it.” Jang predicted, “In 100 years, tobacco will compete against tea in the market.” In 1668, 33 years later, Dutchman Hendrick Hamel wrote in his journals on the Joseon Dynasty that even children started smoking when they reached 4 or 5 years of age.
King Jeongjo (1752~1800) was known for his love of tobacco. He even wrote its praises: “As warmth dissolved cold phlegm that blocked the chest and smoke soothed lungs and intestines, I could get a good night’s sleep. Tobacco is perhaps better than tea or liquor as it is useful and good for health.” King Jeongjo even ordered that smoking be promoted, saying, “I would like to share tobacco with my subjects and spread the benefits of it across the country, as a way to thank heaven for its love for humans.” This was based on the belief that tobacco was good for health. “Exemplar of Eastern Medicine” by the Joseon court physician Heo Jun supported this view. The book stated that since tobacco is spicy and warm, it reduces fascial pain and chills and also helps get rid of vermin. It went on that tobacco is a good remedy for indigestion from eating cold food.
However, Lee Ik, a Confucian scholar (1681-1763), found out the true nature of tobacco. In “The Collected Works of Seongho,” he listed 10 harmful effects of tobacco. The book stated tobacco disturbs the spirit internally. Externally it impairs hearing and sight, turns a smoker’s hair gray, pales the complexion on the face, makes smokers lose teeth, lose weight and grow older and weaker. Moreover, a smoker is cloaked with a bad odor and wastes money. Other things could be added to the list today. Cigarette butts damage the environment and cause fires. The city of Seoul announced Monday a campaign to control littering of cigarette butts on the street, starting late this month. Fines range from 25,000 won ($25) to 50,000 won. Most buildings are already non-smoking areas; smokers outside need to properly dispose of butts after they light up. It’s good that some smokers will quit rather than be pushed into a corner like this — unless we go back to the Joseon Dynasty.